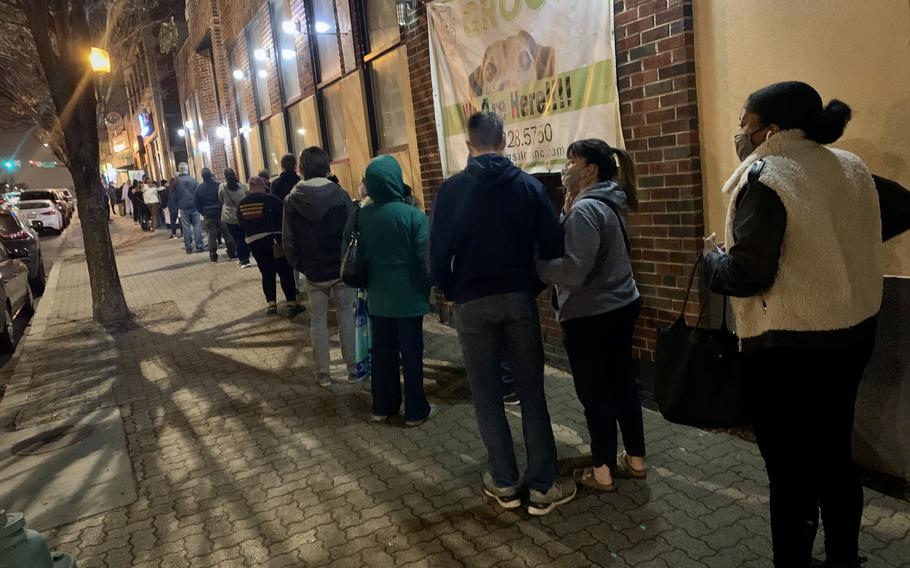 A line of people stretches for an entire block on Georgia Avenue in Silver Spring, Md., for COVID testing on Saturday. (Sarah Voisin/The Washington Post)

WASHINGTON — The Biden administration is warning the United States could see 100 million coronavirus infections and a potentially significant wave of deaths this fall and winter, driven by new omicron subvariants that have shown a remarkable ability to escape immunity.

The projection, made Friday by a senior administration official during a background briefing as the nation approaches a COVID-19 death toll of 1 million, is part of a broader push to boost the nation’s readiness and persuade lawmakers to appropriate billions of dollars to purchase a new tranche of vaccines, tests and therapeutics.

In forecasting 100 million potential infections during a cold-weather wave later this year and early next, the official did not present new data or make a formal projection. Instead, he described the fall and winter wave as a scenario based on a range of outside models of the pandemic. Those projections assume that omicron and its subvariants will continue to dominate community spread, and there will not be a dramatically different strain of the virus, the official said, acknowledging the pandemic’s course could be altered by many factors.

Several experts agreed that a major wave this fall and winter is possible given waning immunity from vaccines and infections, loosened restrictions and the rise of variants better able to escape immune protections all make another major wave possible.

Many have warned that the return to more relaxed behaviors, from going maskless to participating in crowded indoor social gatherings, would lead to more infections. The seven-day national average of new infections more than doubled from 29,312 on March 30 to nearly 71,000 Friday, a little more than five weeks later.

“What they’re saying seems reasonable — it’s on the pessimistic side of what we projected in the covid-19 scenario modeling run,” said Justin Lessler, an epidemiologist at University of North Carolina Gillings School of Global Public Health. “It’s always hard to predict the future when it comes to covid, but I think we’re at a point now where it’s even harder than normal. Because there’s so much sensitivity, in terms of these long-term trends, to things we don’t understand exactly about the virus and about [human] behavior,” Lessler said.

Another modeler, epidemiologist Ali Mokdad of the University of Washington’s Institute for Health Metrics and Evaluation, said in an email Friday that a winter surge is likely. His organization, which has made long-term forecasts despite the many uncertainties, just produced a new forecast that shows a modest bump in cases through the end of May and then a decline until the arrival of winter.

The administration official said the latest forecasts are being shared with lawmakers on Capitol Hill as the White House seeks to restart stalled negotiations over appropriating more funding for the coronavirus response. While the White House had sought $22.5 billion, key Senate lawmakers clinched a bipartisan deal for $10 billion in coronavirus aid last month. But a dispute over the administration’s decision to relax pandemic restrictions at the U.S. border upended swift passage of the deal, which has now languished for weeks.

White House officials have said they’re concerned that a significant portion of the nation’s supply of antivirals and tests will be exhausted as a result of an anticipated increase in cases in the South this summer. Without those tools, they say the country would be unprepared for a fall and winter surge, and deaths and hospitalizations could dramatically increase.

If Congress remains stalled, the official said, the administration would likely pull money that was set aside for more tests and therapeutics to purchase more vaccines — decisions that will leave the country more vulnerable than it should be.

The projected summer wave in the South, which would mirror similar upticks in 2020 and 2021, is particularly concerning because of the region’s lower vaccination and booster rates. While deaths in the Northeast have held steady amid a sharp increase in cases in that region over the last several weeks, the South remains more vulnerable because fewer people have gotten the shots, the official said.

That forecast is echoed by outside experts. “For some reason, we see a seasonality in these peaks. We’re seeing a very high rate of cases in the South during the summer months, possibly because so many people are inside because its so hot there,” said Mercedes Carnethon, epidemiologist at the Northwestern University Feinberg School of Medicine.

Part of the administration’s challenge in responding to the pandemic is that the virus keeps mutating in ways that have sometimes surprised scientists. Omicron, most notably, emerged in southern Africa with stunning speed in November with a package of mutations and came from a different part of the virus’s family tree than the delta variant it replaced. The origin of omicron remains unknown.

Omicron has since spun off many subvariants that are even more transmissible than the original strain. The BA.2 omicron subvariant continues to account for a majority of new infections in the United States, but the BA.2.12.1 subvariant is rapidly gaining ground and may soon become the most common strain. Meanwhile, two other highly transmissible variants, BA.4 and BA.5, have fueled a recent surge in infections in South Africa.

“Predicting new variants that are going to spill out — that’s total guesswork,” said Jeffrey Shaman, an epidemiologist at Columbia University. “Predicting that they’re going to be successful, that’s guesswork as well.”

Another big unknown that might affect the size and severity of another wave is whether there will be more effective vaccines available by fall. Both Pfizer and Moderna are working on new booster shots that combine different versions of the coronavirus to protect against variants, but it remains unclear whether they will be more effective than existing vaccines. Administration officials said they hope they will be able to distribute such boosters in the fall, particularly to the elderly and those most at risk of severe infection and death.

Natalie Dean, a biostatistician at Emory University, said the longer the time period between COVID-19 waves, the greater the number of people who will be vulnerable to infection because of waning immunity.

“That just puts vulnerable people back at risk,” Dean said. “It seems likely there will continue to be these ups and downs.”