Fauci said the pandemic was over in US, then backpedaled. What do experts say? 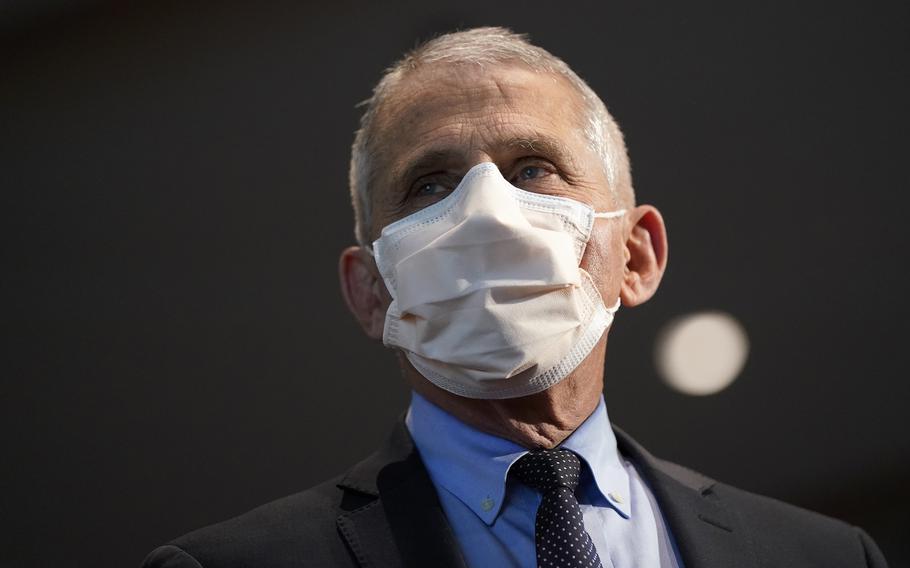 Dr. Anthony Fauci, director of the National Institute of Allergy and Infectious Diseases, is shown on Dec. 22, 2020 in Bethesda, Maryland. (Patrick Semansky/Pool/Getty Images/TNS)

PHILADELPHIA (Tribune News Service) — Anthony Fauci caused a stir this week when he said on national television that the United States was “out of the pandemic phase.”

For one thing, the word choice by the nation’s infectious-disease chief was wrong. But the bigger question is whether Fauci was correct to suggest that in this country, the worst might finally be over. There’s now evidence suggesting that more than 90% of Americans have some level of COVID-19 immunity.

Fauci later acknowledged that the world is still in the midst of a pandemic, but said the U.S. was past the “full-blown” phase of COVID, transitioning to a more predictable, “controlled” pattern over the long term.

Maciej Boni of Pennsylvania State University, Thersa Sweet of Drexel University, and Abby Rudolph of Temple University, three epidemiologists who’ve been tracking COVID since the start, will help with a deep dive into the evidence.

The words pandemic and epidemic are sometimes used in everyday conversation to suggest “a lot of cases.”

But there are lots of cases of flu every winter, and in most years, it isn’t called an epidemic.

Instead, an epidemic means a sudden rise in cases above what is expected. A pandemic is an epidemic occurring in multiple countries.

With COVID, the World Health Organization declared a pandemic to be underway in March 2020, after the virus had spread to more than 100 countries. Before long, it would indeed reach them all.

Yet it’s not correct to say that any one country is or isn’t in a pandemic phase, as that term applies to multiple countries, said Rudolph, an associate professor at Temple’s College of Public Health. That is, the U.S. could emerge from the epidemic phase while a pandemic remains underway globally.

So Fauci was wrong?

Technically, yes. The pandemic remains underway, even if maybe the U.S. might be emerging from the epidemic phase.

But cut the guy some slack. It is hard to boil down complex subjects into straightforward answers on live television.

Upon realizing he had overstated things, Fauci quickly made the rounds with the Associated Press and the Washington Post, acknowledging that no, we’re not quite there yet.

A similar thing happened during those early controversial weeks of the mask debate. At first, Fauci and other prominent physicians said there was no need for most people to wear face coverings. As more evidence emerged about how easily the coronavirus could spread through the air, he admitted he was wrong, and explained why.

Though it may feel as if COVID has been dragging on forever, it’s still a fairly new disease. So it is hard for expert disease-trackers to pinpoint when we have emerged from the epidemic or pandemic phase, reaching “normal” numbers of cases and hospitalizations. Everything about this has been abnormal.

Earlier in the pandemic, for example, surges in the spring and fall caught many experts off guard.

But the two really big spikes came in the winter, and evidence suggests that in the future, the colder months may always see a rise in cases, said Sweet, an associate professor at Drexel’s Dornsife School of Public Health.

That’s due to a combination of factors, including that more people congregate inside and that the dry air makes their nasal passages less able to filter viruses. So COVID would become a seasonal illness like the flu, Sweet said.

“Even if that does happen,” she said, “the question is how severe is it going to get in the winter?”

In other words, what will normal look like? Hard to say for sure, but there are clues, said Boni, an associate professor of biology at Penn State.

The key, he said, is to determine how many people have some level of immunity, whether through vaccination, infection or both.

Once that percentage reaches the mid- or high-90s, then public health officials can make reasonable predictions about the toll of disease from year to year. That’s why we have a good handle on the flu, as nearly everyone has been exposed to it in one form or another. Thousands still die each year, but most people are protected from severe disease, and the numbers follow a predictable pattern.

How do we know COVID immunity levels?

Since the pandemic started, COVID testing numbers have lagged far behind a true count of infections. In order to estimate the true number, the CDC has tried another route: testing blood samples that are collected at hospitals and labs for other reasons.

This week, agency scientists reported that at the end of February, close to 60% of all blood samples contained a special type of antibody to the coronavirus.

The blood tests detected antibodies to an internal virus protein called the nucleocapsid, present in the blood only for those who have been infected. This is different from the antibody that the immune system generates in response to the vaccines, which are based on the “spike” proteins that protrude from each virus particle.

Translation: By the end of February, a staggering three out of five people had been infected with COVID.

Yet even the new CDC estimate is low, Boni said. Antibodies wane with time, so the blood samples likely reflected infections only in the previous few months, when the omicron variant was widespread.

Could more than 90% of Americans have immunity?

To estimate the larger, cumulative number of infections, researchers have to dig deeper.

Boni was part of one such effort, working with colleagues at Harvard, Brown, and Yale Universities. The team analyzed data from hospitals and health agencies in three New England states, allowing them to estimate the number of cases that were missed in official tallies.

The researchers determined that by the end of May 2021, close to 70% of people in those three states, Connecticut, Rhode Island and Massachusetts, had some level of immunity from being vaccinated, infected, or both.

Another group of researchers from Yale, Harvard and Stanford conducted a similar deep dive for the whole country six months later, after the rise of the delta variant. They found close to 90% of people had some degree of immunity.

With the additional cases from omicron, Boni thinks that number now is well into the 90s. That would mean nearly everyone has some degree of protection, except for very young children.

If that’s the case, might the U.S. truly be nearing the end of the epidemic, “abnormal” phase of COVID?

Not necessarily, said Sweet, the Drexel professor. Immunity wanes with time, and other variants will emerge at some point. And they will not necessarily be milder.

“A lot of people are under the impression that as the virus mutates, it would become less virulent so it’ll become more like the common cold,” she said. “We don’t know what the next variant’s going to look like.”

That’s what happens with the flu, after all. It follows a pattern in most years, but every so often, there are new strains to which few have robust immunity, and an epidemic ensues.

While the future is impossible to predict, Boni said a “normal” wintertime caseload for COVID might be one-third of what it was during the past two winters. Maybe.

“The numbers will get more regular, and smaller,” he said. “I’m 70% sure that it will look that way. But everything’s been surprising with COVID.”