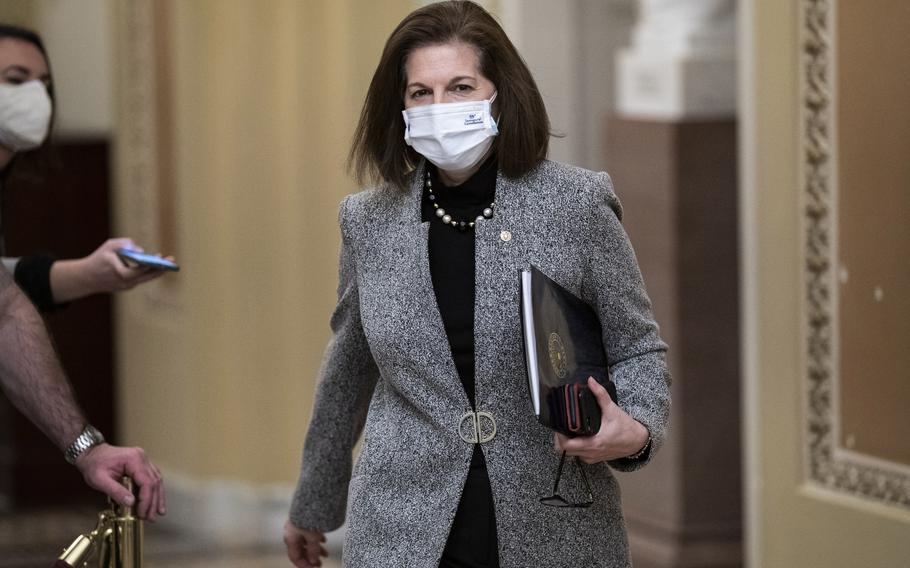 WASHINGTON - President Joe Biden is facing a growing mutiny from Democratic candidates - including five vulnerable senators - who are questioning his administration's decision to lift a pandemic health order that has drastically curtailed migrants' ability to seek asylum at the southern border.

The internal dissension is an early acknowledgment from many Democrats that worries about border security and immigration could become a major obstacle for them in this year's midterm elections. Polls show the topic to be a leading concern for voters, and one on which Biden has received low marks. Now, candidates are openly warning that the Biden administration's decision to stop using the public health order, known as Title 42, could lead to chaotic conditions at the border and refocus public attention on an issue that has challenged president after president.

Democratic senators from Nevada to Georgia to New Hampshire have distanced themselves from the move, charging that the administration has yet to present a satisfactory plan to prepare for the expected increase in attempted border crossings. The decision also threatens to create friction between these Democrats and liberal voters demanding more protections for migrants.

Leon Fresco, an immigration attorney and former aide to Senate Majority Leader Chuck Schumer, D-N.Y., said Democrats are in desperate need of a "reframing" of the border issue. "Because this debate, the way it's currently structured, is very bad for Democrats," he said. "Either we have Title 42 and no chaos, or Title 42 and chaos. That's just not a good look for anybody right now."

The Trump administration used Title 42 to expel tens of thousands of migrants, and until recently the Biden administration continued renewing the policy. Republicans have signaled they are eager to make the border a centerpiece of their political message, tying it to a larger argument that Democrats have been ineffective in fighting crime and drugs, and have struggled to rein in chaos at home and abroad.

In a signal of how much attention the issue haw drawn from this year's candidates, Texas Gov. Greg Abbott, R, is requiring secondary inspections of many commercial trucks and other vehicles crossing the border, and he sent a busload of migrants to Washington this week, after accusing Biden of turning a "blind eye" the situation on the border. His likely Democratic rival, former congressman Beto O'Rourke, criticized Abbott's inspection policy, but O'Rourke also voiced disapproval of the Biden's administration's position on Title 42.

The border could create broader political implications in the battle for the Senate, where Democrats' narrow majority is at risk this fall. One key Democrat who has raised alarms is Sen. Catherine Cortez Masto of Nevada, the Senate's first Latina. Cortez Masto has broken with some fellow senators of Hispanic descent who have pushed Biden to lift the pandemic-related border policy. She is seeking reelection in a swing state - one where, polls suggest, Republicans are well positioned to take advantage of deteriorating public approval for Biden and increasing anxiety about the economy, crime and the border.

Cortez Masto said in a statement after the April 1 announcement that "the administration is acting without a detailed plan" in allowing the Trump-era policy to expire at the end of May. "This is the wrong way to do this and it will leave the administration unprepared for a surge at the border," she said, calling instead for a more comprehensive approach to immigration.

Similar accusations have come from four other Democratic senators facing competitive races this fall - Michael Bennet of Colorado, Maggie Hassan of New Hampshire, Mark Kelly of Arizona and Raphael Warnock of Georgia - who have all suggested that the administration is acting too rashly. Kelly and Hassan are co-sponsoring bipartisan legislation that would delay the scheduled May 23 removal of the Title 42 policy for at least 60 days beyond the sunset of the covid national emergency declaration, which was recently renewed into July. Hassan and Kelly also recently visited the southern border.

Addressing reporters Wednesday after touring a border checkpoint in his home state, Kelly said proceeding to lift the policy next month would create a "crisis on top of a crisis."

"It shouldn't be around forever," Kelly said of Title 42. "But right now, this administration does not have a plan."

But there is also risk for some Democrats in opposing the end of Title 42 too aggressively. Some are already facing dismay from immigrant advocates who see calls for delay as a warning sign. They include Cortez Masto, who was swept into office in 2016 thanks in part to Nevada's sizable Latino electorate.

"If now is not the time, when is the right time?" said Rico Ocampo, an immigrant organizer with Make the Road Nevada, who called Cortez Masto's calls "disappointing" and said advocates would "keep a close eye" on how she and other Nevada politicians vote on Title 42 in the coming months.

Democrats facing reelection this year, Fresco said, are "100% justified" in airing frustration with the Biden administration's border moves so long as the choice is binary. "But what is not justified at all is doing nothing about it," he added, calling on the frustrated lawmakers to offer a third option and show voters they are at least pursuing it.

The backlash has repercussions that reach beyond the campaign trail. Already it has complicated the Biden administration's request for billions of dollars in additional pandemic funding to pay for more doses of vaccine and therapeutic drugs. After congressional negotiators struck a tentative $10 billion deal earlier this month, the agreement fell apart when Senate Republicans insisted on an amendment vote that could keep Title 42 in place.

According to Senate aides, at least a half-dozen Democrats were at risk of joining Republicans on such a vote - in what would have been an embarrassing setback to Biden and a stinging defeat to immigrant activists who had pushed him for months to restore the asylum system to some semblance of its pre-pandemic state.

Republicans are signaling confidence that talking about the border will be a potent line of attack ahead of November, second only to economic messages attacking Democrats for rising inflation. They say they believe Democratic incumbents will be hard-pressed to inoculate themselves against their records of voting against Trump-era immigration measures such as a border wall and the "remain in Mexico" policy that sought to keep asylum seekers out of the United States while their claims are adjudicated.

"The situation at the border today is the culmination of the policies that they've supported," said Jack Pandol, a spokesman for the Senate Leadership Fund, a super PAC that is expected to spend heavily on ads targeting the Democratic incumbents. "You are seeing them changing course and trying to sidestep political blame for the situation they helped create, and voters aren't going to buy that."

Republicans have paid close attention to the rising Democratic discontent. On Thursday, GOP members of the Senate Judiciary Committee called for a hearing on the Biden administration's move, citing statements from Cortez Masto, Kelly, Warnock and others. "We share the concerns raised by our Democratic colleagues and are troubled by the potential consequences," they wrote.

Non-incumbent Democrats are starting to speak out as well. Wisconsin Lt. Gov. Mandela Barnes, a leading candidate for the Democratic nomination against Sen. Ron Johnson, R-Wis., told the Milwaukee Journal Sentinel on Tuesday that he was against lifting the policy "simply because there's not a detailed plan in place so that we can keep asylum seekers and people in the country safe."

The Biden administration has sought to counter the notion that the government is unprepared for a post-Title 42 rush at the border, which some fear could bring an additional 10,000 migrants to the southern border each day. Department of Homeland Security spokesman Eduardo Silva on Wednesday pointed to a "comprehensive, whole-of-government plan to manage any potential increase" - including establishing a new coordination center, increasing processing capacity and redeploying hundreds of personnel.

The department has produced a 13-page "Strategic Concept of Operations" that has been provided to lawmakers, along with briefings with key officials. But that has been far from sufficient to the Democrats who are now faulting the administration.

"It's eight pages of what a plan might look like," Kelly said Wednesday, adding that he has personally spoken to Biden and Homeland Security Secretary Alejandro Mayorkas about border issues but has found their response to be, "so far, unacceptable."

"They understand that they might have an impending problem," he said. "I don't think they've come to the realization of what level it will be and that it could be a humanitarian crisis."

The embattled in-cycle lawmakers are getting little cover from top Democratic leaders, who like Biden have been under immense pressure from immigrant and civil rights advocates to lift the Trump-era restrictions.

Schumer said in a joint statement earlier this month with Sen. Alex Padilla, D-Calif., that it was "long overdue for Title 42 to end" and that "its misguided implementation put countless people in danger and wreaked havoc on our asylum system that desperately needs repair."

Some lawmakers who have long advocated for comprehensive immigration legislation have sought to walk a finer line, keeping their criticism more measured than Kelly's. They include Bennet, who is up for reelection this year and has echoed some the rhetoric of his more vulnerable colleagues. He "believes the administration has failed to articulate a plausible plan to ensure the country is prepared for the surge," according to his spokeswoman, Olivia Bercow, and is urging the administration to develop such a plan before the May 23 effective date.

Cortez Masto, who vowed to fight on behalf of the tens of thousands of Nevada immigrants who powered her to victory, as well as the young undocumented immigrants known as "dreamers," also appears to be seeking a political equilibrium.

"They came here for an opportunity to succeed, to work hard so that they can provide a roof over their head, food on the table for their kids and give their kids every opportunity that they may not have," she said in her 2016 victory speech. "That is no different than all of our stories, and that is what we are fighting for."

Cortez Masto has long advocated for a broad bipartisan immigration deal that would include both stronger border security and a path to citizenship for dreamers. But in 2020, as the pandemic took hold, she joined dozens of other lawmakers in decrying a Trump administration crackdown on those seeking asylum at the southern border, including the use of Title 42, and last year she joined every other Democrat opposing a budget amendment endorsing the measure.

That history now has her facing attacks from both left and right. Her likely Republican opponent, former state attorney general Adam Laxalt, said Cortez Masto is "desperately trying to fool Nevadans into thinking she cares about protecting our border" by breaking with Biden.

"Her claims on Title 42 are nothing but election-year rhetoric," said Laxalt, who cited her past votes against some border security measures and taking action against "sanctuary cities" that do not cooperate with federal immigration authorities.

Ocampo, the immigrant organizer, issued an equally blunt warning - from the opposite end of the political spectrum.

"When you talk about being a champion for immigration, this is one of those situations where elected officials have to show up," Ocampo said. "They have to show up for communities that put them into office."