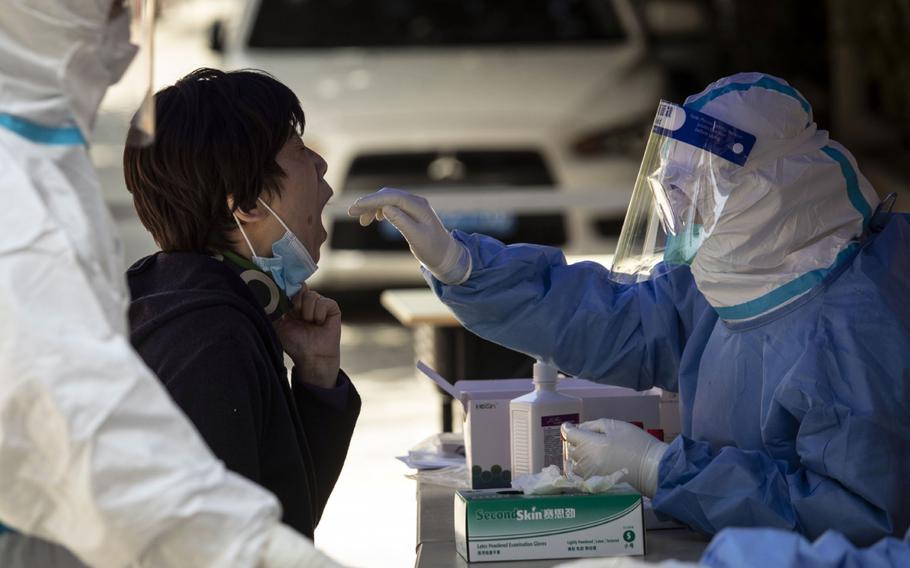 A worker in personal protective equipment collects sample from a resident for a COVID-19 test in a neighborhood placed under lockdown in Shanghai on April 4, 2022. (Qilai Shen/Bloomberg)

The disclosure of new COVID variants emerging in China and the rise of a potentially more transmissible strain in the U.K. has recast the spotlight on the ongoing risk of the virus, even as health experts say there’s no reason to panic.

The World Health Organization said a hybrid of two omicron strains — BA.1 and BA.2 — that was first detected in the U.K. and dubbed XE could be the most transmissible variant yet. It is estimated to spread 10% more easily than BA.2, which itself was more transmissible than the original omicron famous for its ease of penetration.

Meanwhile in China, which is experiencing its biggest outbreak since Wuhan, authorities have disclosed two novel omicron subvariants that don’t match any existing sequences. It’s unclear if the infections were one-off events of little significance, or if they may be a sign of problems ahead.

“If the Chinese authorities’ efforts to constrain transmission are ineffective against a highly, highly transmissible virus, like an omicron variant, this could become a threat for the rest of the world,” said Rajeev Venkayya, a former White House biodefense adviser who became the CEO of drugmaker Aerium Therapeutics in March. “We know that uncontrolled transmission of the virus can lead to more viral evolution and an evolution around vaccines and therapeutics,” potentially making them less effective, he said.

The continued circulation of COVID-19 nearly 2.5 years after it was first detected in China, driven by the development of mutations that allow infections to surge and deaths to batter the same locations again and again, remains a key issue for a world ready to live with the virus. The U.S. Food and Drug Administration is holding a hearing this week to discuss what booster shots will be needed and how to select which specific strains of the virus they should target.

The number of infections from these new variants are tiny given the scope of the outbreaks that are still happening worldwide, and scientists have documented the emergence of many variations that have gone nowhere. The U.K. health authorities have recorded more than 630 cases of XE, underscoring that more information is needed.

“We should monitor the new recombinants closely, but we should not panic at the moment,” said Leo Poon, a virologist and University of Hong Kong professor who has tracked and written reports on the emergence of new strains.

It’s not unexpected to see COVID recombinant variants, or a mix of two previous strains, particularly since the delta and omicron strains have been circulating widely, he said. It’s likely that some people would be infected by both strains. If a variant were to be detected in multiple regions and was spreading in the community, then that would be of concern, he said.

China’s recent disclosures on novel variants come at a very early stage of spread, making it hard to know how significant the findings are.

Officials in the eastern Chinese city Suzhou, about 110 kilometers from Shanghai, reported an infection with an omicron subvariant derived from BA.1 over the weekend. It didn’t match any existing sequences in China or in the international database for viral sequences known as GISAID. It was found in a patient with a mild case of COVID, the city’s health authorities said.

A second infection found in the northeastern city of Dalian was caused by a BA.2 subvariant that doesn’t match any sequences of domestic or imported cases in the country so far. It was found in a fashion store clerk who was selling clothes imported from South Korea. Close to 400 close contacts were tested. All were negative.

The novel strains from around the world are now cropping up in Asia. The first infection caused by the XE variant in Thailand was detected on Saturday, while in February a different recombinant variant was found in two people who arrived in Hong Kong from Europe. The strain hasn’t been detected in the community, and the two travelers recovered fully.

Most of the infections in China and Hong Kong, where more than half of the city is estimated to have been infected since the start of the year, stem from existing variants thus far, said Stephen Goldstein, a virologist from the University of Utah. So while the outbreaks are an emergency for the governments and public health officials, they don’t currently represent a global health threat, he said.

“I don’t really expect a new variant to emerge from the omicron epidemics in Hong Kong and China,” Goldstein said. “That said, this virus has certainly surprised us before and we need to stay vigilant.”