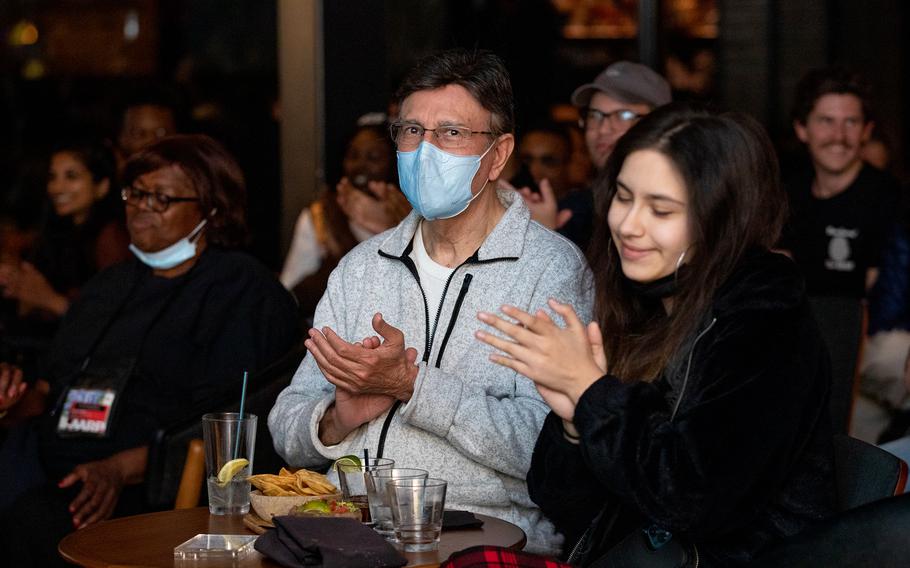 A father-and-daughter duo attend a comedy show in Washington, D.C., on March 14, 2022. (Amanda Andrade-Rhoades for The Washington Post )

WASHINGTON - With mask mandates in the Washington region lifted for most settings and attitudes about social distancing more relaxed, health officials are cautiously monitoring the behavior of the latest subvariant of the coronavirus.

BA.2, the more contagious cousin of the omicron variant that has spread through Europe and other parts of the world, now represents about 30% of new infections in the Mid-Atlantic region that includes the District of Columbia, Maryland and Virginia, according to the Centers for Disease Control and Prevention's tracker for variants.

Public health experts say BA.2 will likely become the dominant strain in the Washington region over the next several weeks, driving another uptick in new infections after a steady decline since the peak of the omicron surge in early January.

On Friday, the region's weekly average for new cases was 1,131, the lowest rate since July.

The tens of thousands of people who were infected by omicron may have some level of immunity to BA.2 because of the similarities between the two strains, health officials said.

Those who haven't been infected by omicron or who are immunocompromised are more vulnerable, though being fully vaccinated will help guard against serious illness.

"We think we're going to see much fewer breakthrough reinfection cases with people who've already had BA.1," said Brandy Darby, an epidemiologist with the Virginia Department of Health, using the scientific name for the original omicron variant.

"But for people who were infected with alpha or delta or some of these previous lineages and have not been infected yet with omicron, they could experience reinfection with BA.2," Darby said.

Health officials are watching for signs of an outbreak as even more prevention measures fade away, including pandemic workplace safety requirements in Virginia that the state's Worker Safety Board voted earlier this week to remove.

Local health departments say they are preparing to again ramp up vaccinations and testing if new infections begin to sharply increase.

"We're very much focused on what's coming next," said David Goodfriend, health director in Loudoun County, Va., which is encouraging residents who have pre-existing conditions or are otherwise vulnerable to wear masks in crowded areas.

"If there is enough of a concern where mitigation strategies make sense to implement, we want to be able to provide our local leaders with that information as quickly as possible," Goodfriend said.

Costi Sifri, director of hospital epidemiology for the UVA Health system of health care facilities in Virginia, said it's still too soon to know how BA.2 will affect the region.

Community transmission remains low. But it appears that the drop in infection rates has begun to level off, Sifri said, adding that he also doesn't believe a dramatic spike in infections akin to the omicron surge is likely to occur.

Nonetheless, it's vital for local and state health departments to be equipped with the resources they need to deal with a surge if it happens, Sifri said, expressing concern over $15 billion in proposed new coronavirus aid that has been stalled in Congress during federal budget negotiations.

Earlier this week, the Biden administration said it doesn't have enough money to buy a possible fourth shot for everyone after Pfizer, BioNTech and Moderna filed for emergency authorization for another round of inoculations - for those 65 and older for Pfizer and BioNTech, and all adults for Moderna.

"Hopefully, Congress will recognize that we're not out of this pandemic yet," Sifri said. "We still need the resources to battle this."

In Maryland, the state Department of Environment is analyzing the concentrations of coronavirus found in local wastewater systems, a process that can detect an outbreak five days earlier than clinical testing data would show.

Mark Shaffer, the department's spokesman, said the tool is more critical now that testing has mostly transitioned to at-home tests that are typically not publicly reported.

The state's genomic surveillance shows that BA.2 represents about 21% of new cases in Maryland. But the wastewater monitoring system has not signaled a serious outbreak ahead so far, Shaffer said.

Even so, reports of new infections are steadily trickling in.

In Montgomery County, Md., Councilmember Andrew Friedson, D-District 1, announced Thursday that he had tested positive for the virus.

"I have mild symptoms, thanks to being vaccinated and boosted," Friedson said in a statement posted to Twitter.

Though 86% of Montgomery County residents are fully vaccinated - the highest rate in the region - county health officials said they are working to do more in advance of another coronavirus wave.

James Bridgers, the county's interim health director, said the health department is working with Montgomery County Public Schools, which dropped its mask requirements at the beginning of March, to get all students boosted before spring break begins on April 6.

Students must be tested before being allowed back into classrooms, officials said.

Montgomery has continued to offer free testing to residents who are uninsured. To avoid the testing crunch that characterized the early weeks of the omicron surge, the county is also distributing at-home rapid test kits to residents, officials said.

Sean O'Donnell, the county's emergency preparedness manager, said Montgomery would reinstate precautionary measures in some higher-risk areas of the county, such as nursing homes or schools, if cases of new infection dramatically escalate.

"This wouldn't be a universal mandate," he said, but a "focused implementation" likely involving guidance rather than regulation.

A District of Columbia health official said during a call with the D.C. Council Friday that there are no imminent plans to reinstate the city's indoor mask mandate that was lifted last month, even though cases have begun trending slightly upward in D.C. during the past week.

"We're carefully watching case rates, understanding if there's a time and place to insert mitigations," Patrick Ashley, a senior deputy director with the D.C. Department of Health, told the council. "[People] need to make sure they're continuing to engage in safe practices, social distancing, being aware of their specific medical conditions."

Ashley said the city is focusing more on "syndromic" surveillance - noting if residents are increasingly buying medications like cough syrup to treat themselves.

D.C. health officials have also begun analyzing concentrations of the virus in wastewater, he said.

Some of the closest scrutiny is inside the region's schools, which have been reporting a stream of new cases since students have had the option of not wearing masks inside the classroom.

Arlington County Public Schools recorded about 193 new cases since March 1, officials said. The district is encouraging mask-wearing and vaccinations for students and staff, along with asking families to get tested and keep students at home when they're sick.

The Maryland district has said it doesn't plan to drop its mask requirement until the county - one of the hardest hit by the coronavirus in the region - reaches a full vaccination rate of at least 80%. As of Thursday, about 73% of Prince George's residents were fully vaccinated, said Meghan Gebreselassie, a school district spokesperson.

Goodfriend, Loudoun County's health director, said the unpredictable nature of the pandemic over the past two years shows that local officials need to stay flexible about doing what it takes to prevent the virus from spreading further.

"The hope is that this becomes a seasonal issue," where prevention measures can correspond with periods when people are interacting more indoors, Goodfriend said. "But covid has surprised us before."