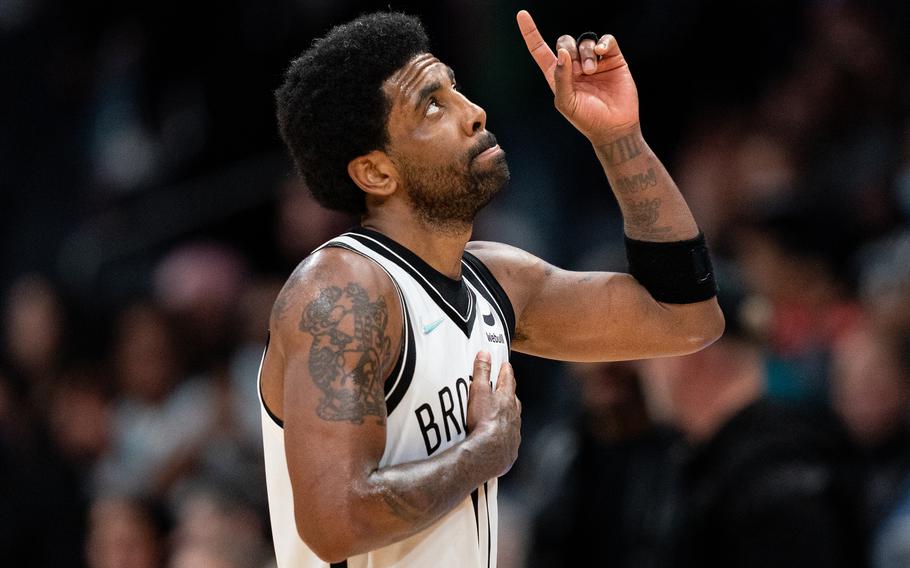 The Brooklyn Nets’ Kyrie Irving looks up and points to the sky during a game on March 8, 2022, in Charlotte, N.C. Irving will become the first beneficiary of the New York City mayor’s change of heart on vaccine mandates when he plays his first home game of the season Sunday at the Barclays Center. (Jacob Kupferman/Getty Images/TNS)

Labor officials, who have already challenged the mandatory vaccines in court, were poised to amp up the fight against the firings that left nine police officers and 37 civilian NYPD employees looking for work as unvaccinated Brooklyn Nets star Kyrie Irving and players with the Yankees and Mets were cleared to play.

"Terminating our members based on a policy that no longer exists for most New Yorkers is both disparate treatment and counter-productive to our efforts to boost staffing levels at the city's jails," said the Correction Officers' Benevolent Association in a statement.

"We strongly urge the city to reconsider the importance of having one consistent standard, which does not hurt the hometown heroes who serve our city every single day."

Paul DiGiacomo, head of the Detectives' Endowment Association, said his union was exploring other legal actions "in addition to the two cases we are presently litigating."

A cross-section of city unions, including the United Federation of Teachers, city EMTs and paramedics in Local 2507 and the Sanitation Department, blasted Adams' decision.

The Municipal Labor Committee, representing some 102 unions and 400,000 city employees, was "looking into all legal options," according to a source.

A positive note was sounded Friday by police Lieutenants Benevolent Association head Lou Turco, who predicted Adams will lift the mandate for the city's 36,000 police officers.

All-Star guard Irving will become the first beneficiary of the mayor's change of heart when he plays his first home game of the season this Sunday at the Barclays Center.