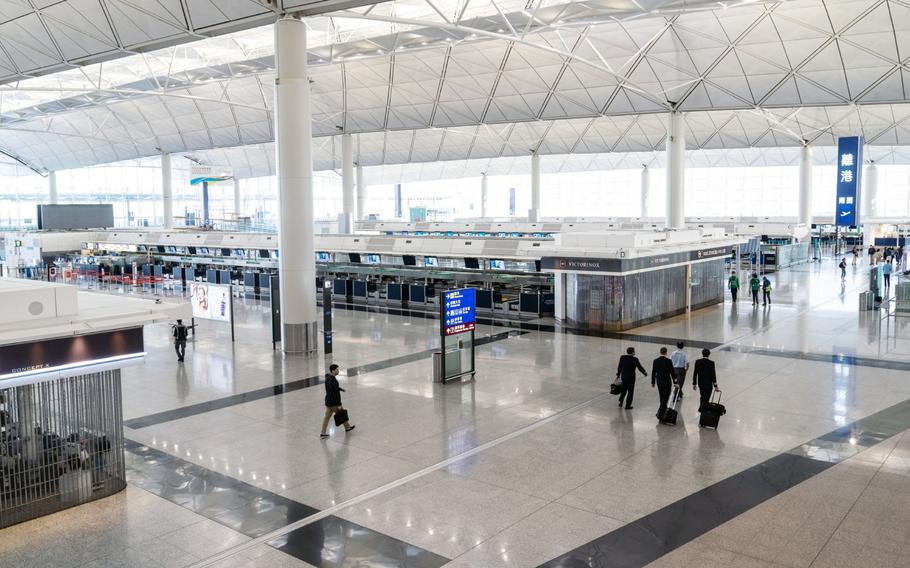 Hong Kong's plan to test the entire population for coronavirus in March has been indefinitely postponed as the city prioritizes vaccinating the elderly and reducing fatalities in an outbreak that's now the deadliest in the world.

The government is still making plans for the mandatory testing exercise, including the timing and how to ensure essential operations can continue if movement restrictions were to be imposed, Chief Executive Carrie Lam said Wednesday in her first major public press briefing in two weeks. For now, authorities will focus on a vaccination drive for elderly people living at care facilities — which are seeing a surge in fatalities — and increase the number of hospital beds to treat patients, she said.

"I cannot say that we definitely won't" conduct the mass test, said Lam, who wore a face mask at the briefing after being criticized for not doing so previously. "But if we will, and once we have a detailed plan and timetable, we will definitely announce it as early as possible."

The pivot in priorities after two weeks — during which the prospect of mass testing saw a rush of people leaving the city, while those remaining stripped shelves of food and medicine — reflects a government response that has been mired in chaos and confusion as the virus races through Hong Kong's population, especially its under-vaccinated elderly.

The shift away from mass testing follows suggestions from Liang Wannian, a seasoned epidemiologist who has overseen China's COVID response and is now advising Hong Kong, and Lam's comments closely echoed his language several times throughout the briefing — including around the need for Hong Kong to not "lie flat" in the face of the outbreak.

Hong Kong's COVID spiral has embarrassed Beijing, whose zero-tolerance approach the financial hub is following in spirit, though not in practice, as resources come under strain. Lam said that the mainland has already given support beyond what city officials requested, including providing traditional Chinese medicine without being asked, and sending three batches of experts who stayed longer than expected.

Instead of mass testing, Lam announced a slew of measures designed to insulate Hong Kong's vulnerable old people, especially those in care homes, which are seeing a wave of deaths.

More than 2,600 people have died in the current outbreak, with more than 90% not fully vaccinated and more than half residents at care facilities. The median age of the fatalities is 80 or older, the least-vaccinated group in the city with just 53% receiving a first dose.

Already, about 87% of Hong Kong's aged-care homes have had outbreaks, and about 69% of the city's facilities for the disabled have seen cases. More than 60% have clusters of 10 or more infections, according to health authorities. While other parts of the world prioritized vaccinating the elderly because of their vulnerability to the virus, Hong Kong plowed resources into its border regime, betting it could keep COVID out instead. That strategy is now in tatters thanks to the more contagious omicron variant.

Authorities announced 25,991 new COVID cases confirmed by nucleic acid testing and 32,766 cases that were reported on its new rapid-test self-reporting website, though about 9,700 were samples from March 6. There have been more than 500,000 infections in the fifth wave, though that's likely an under-count as there can be two or three undetected or asymptomatic cases for each positive, according to a health official.

The city also recorded 195 deaths, mostly elderly and unvaccinated people. There are 68 patients in critical condition in hospital, and 107 in serious condition.

Lam's tacit admission that mass testing is not a feasible option for a city currently in crisis comes after it abandoned other tenets of the COVID Zero approach due to the runaway nature of the outbreak, among them isolating infected people and contact tracing.

Mass testing is a strategy deployed often to root out COVID cases in mainland China, where there are far more personnel and resources than in Hong Kong, and where testing is done when outbreaks are at an early stage. Experts had raised doubts over the effectiveness of testing Hong Kong's 7.4 million population at the peak of its outbreak, noting the city wouldn't have enough space at isolation facilities to house everyone who tested positive — a key measure needed to completely stamp out infection. The government estimates it will have about 70,000 isolation units.

Officials are identifying suitable locations for specimen collections, assessing daily collection capacity and the transportation of specimens, as well as whether labs can give results within a day in order to allow early isolation of COVID-positive people, Lam said. "We must make a comprehensive consideration based on the development of the pandemic," she said. "The reality is we must fight the epidemic, instead of carrying out what the chief executive has said," referring to her original announcement of the mass testing plan on Feb. 22.

Hong Kong's COVID implosion, after months living largely virus-free, has illustrated the limits of the COVID Zero strategy, raising pressure on the Chinese Communist Party to find an exit plan for an approach that leaves the world's second largest economy isolated as the rest of the world reopens.

"I think at this point, it is pointless to argue whether we are living with the virus or trying to achieve COVID Zero infection," Lam said. "But I can tell you 100% that we have not adopted a so-called 'lying down' approach in tackling the pandemic. In other words, we're not going to be idle."