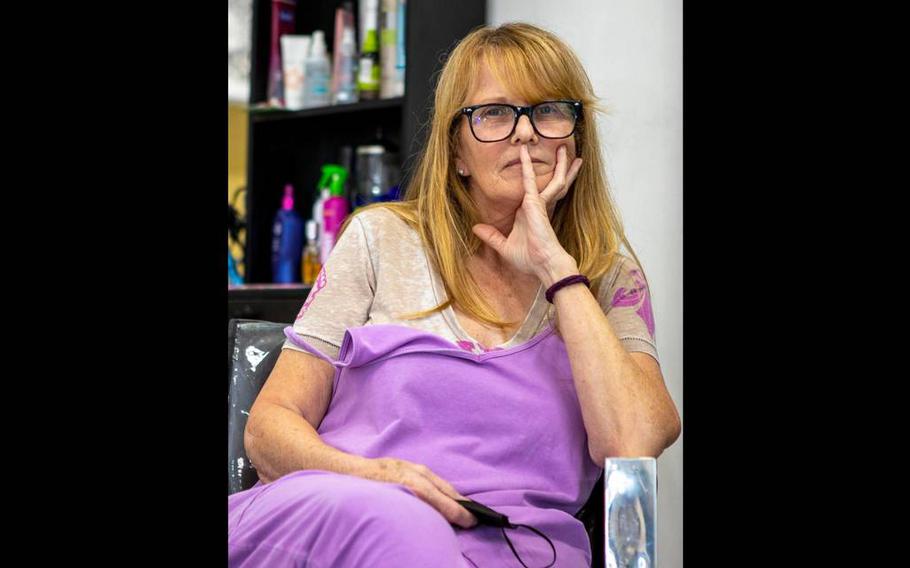 Hairdresser Vicki LeMaster, who has not been able to get her PPP loans forgiven through the online lender Kabbage, is among many small business owners who await PPP forgiveness two years later, at a salon in Miami, Florida, on Tuesday, March 1, 2022. (Daniel A. Varela, Miami Herald/TNS)

(Tribune News Service) — After COVID-19 shutdowns put Miami hairdresser Vicki LeMaster out of work, a friend recommended that she apply for a Paycheck Protection Program loan through the online lender Kabbage.

“I didn’t want a lot of money, just enough to get me through,” she said.

The process seemed simple enough and LeMaster was soon approved for a modest amount in May 2020, which under the terms of the program wouldn’t have to be paid back if used for approved purposes, like payroll.

But getting forgiveness has been far less simple.

The program, approved by Congress as part of the CARES Act relief package, was designed to help small businesses and independent contractors stay afloat as they dealt with pandemic-related closures and disruptions, providing forgivable loans up to $10 million.

The U.S. Small Business Administration, which administered the program commonly known as PPP, provided the money but tasked banks and other lenders with vetting and approving applications and handling the forgiveness process.

Critiques of the program have largely focused on high levels of fraud — with President Joe Biden announcing at his State of the Union Address Tuesday night that he would appoint a chief prosecutor for pandemic fraud at the U.S. Department of Justice — and the challenges minority-owned businesses faced accessing the funds.

But for some borrowers, the process of seeking to have their loans forgiven has also been flawed. The problem has been most pronounced for those whose loans were approved by Kabbage, which has the worst rate of forgiveness of any major lender in the program, according to a Miami Herald analysis of loans approved in the first year of the program.

While it took just hours for LeMaster, who is an independent contractor, to get approved by Kabbage for her loan, the lender is now asking for the money back and her application for forgiveness has still not been approved seven months later. She said she’s spent hundreds of hours on the phone and replied to numerous emails asking her to resubmit documents and paperwork that she had already provided. Calls to the SBA for help got her nowhere.

“It’s been ridiculous,” she said. “This thing has been drawing on for months on end.”

All of that despite the fact that her PPP loan was minuscule: just over $3,000.

“These guys act like I asked for a loan to buy the Taj Mahal,” she said.

The Herald analyzed forgiveness for PPP loans approved in 2020 because all of those loans are past the grace period where repayment is not required, though borrowers are not required to repay their loans while their forgiveness applications are being evaluated.

Kabbage, a so-called financial technology or FinTech company, partnered with two banks, Cross River Bank and Customers Bank, to process some of the PPP loans. Cross River and Customers had the second- and third-lowest forgiveness rates among major lenders: 74% for the former and 77% for the latter.

All three were prolific PPP lenders, accounting for more than 8% of all loans approved in 2020. They have accounted for a disproportionate share of the 2020 PPP loans that remain unforgiven: Combined, Kabbage, Cross River and Customers account for 40% of all 2020 loans that were still unforgiven as of early January.

“Because we don’t have a banker on our side, we’re the ones who have to deal with all the garbage,” she said.

‘There’s no one running the ship’

For borrowers like LeMaster, the PPP loans were undoubtedly a boon during a difficult time. But the program also might have saved Kabbage, which was struggling at the start of the pandemic, with layoffs looming.

Banks were paid a fee for each application they pushed through on a sliding scale based on the size of the loan. Loans approved by Kabbage in 2020 appear to have generated more than $145 million in fees, according to the Herald’s analysis of PPP data. Loans approved by partner banks Cross River and Customers generated an additional $405 million.

Kabbage and other fintech companies typically processed the applications using their online systems and then put the loans on the books of their partner banks, splitting the fees.

Thanks in part to its PPP revenue, Kabbage became an attractive takeover target. American Express announced in August 2020 that it would acquire the lender for a rumored $850 million.

There were early signs that Kabbage’s PPP success wasn’t an entirely feel-good story.

The Miami Herald flagged Kabbage for having approved a disproportionate share of seemingly fraudulent PPP loans in a September 2020 investigation. In May 2021, the House Oversight Committee’s Select Subcommittee on the Coronavirus Crisis launched an investigation into Kabbage, Cross River and two other lenders, noting “reports that FinTech companies and bank partners have been linked to a disproportionate number of fraudulent PPP loans.”

When American Expresss finalized its acquisition of “substantially all” of Kabbage in October 2020 it took on the company’s technology, financial products and many of its employees, but not Kabbage’s existing small business loan portfolio, which included PPP. Those were left behind and the company that remained to handle them was rebranded KServicing.

Customers from around the country described submitting paperwork multiple times, only to be told later that they needed to submit different documents. They told the Herald they were asked to begin repaying the loans as they awaited decisions on forgiveness with the dubious promise that they would later be reimbursed. And they said they were told to sign paperwork that included false information, such as incorrect loan amounts or Social Security numbers.

For the time and energy she spent seeking forgiveness, San Diego psychologist Kathy Vandenburgh said she could have earned the $20,833 she was awarded by Kabbage — “no problem.”

Vandenburgh’s loan was finally forgiven early last month, nearly a year and a half after she first applied.

Crystal Rischer, a Sarasota model and actor, said she felt like the endless hours she spent on the phone made no difference.

“There’s no one running the ship,” she said.

She said she and her husband Michael, a photographer, have been seeking forgiveness for more than a year for two Kabbage PPP loans.

And then there were the barnyard animals.

Multiple borrowers, including Rischer, described hearing chickens and other barnyard animals in the background in some of their calls with customer service representatives, which they said struck them as unprofessional.

Joseph, who owns a Los Angeles call center that helps student borrowers and asked that he be identified only by his first name, provided the Herald with a recording of a phone call he made with KServicing customer service representatives in which a rooster can clearly be heard crowing repeatedly in the background. A manager chuckles when he asks about the sound and says the sound is coming from the neighbors.

It was one of many calls Joseph made to KServicing over the course of more than a year as he tried to get his company’s $14,000 PPP loan forgiven and get KServicing to return $3,500 he had repaid while his forgiveness application was still being reviewed. The loan was finally forgiven in late January 2022 and the company returned the money he paid a month later.

The Herald sent KServicing a detailed list of questions. In response, KServicing CEO Laquisha Milner sent the Herald a statement noting that “a majority of our PPP loans have already received SBA forgiveness” and that “we will continue to work with our borrowers to help ensure they take the steps required to obtain forgiveness by the SBA.”

Kabbage’s partner banks, Cross River and Customers Bank, did not respond to requests for comment.

The SBA also did not respond to detailed questions.

Despite KServicing’s difficulties processing forgiveness applications in a timely fashion, the company has not opted to participate in the SBA’s direct forgiveness program, which allows borrowers who received loans below $150,000 to apply directly through the SBA for forgiveness.

Rischer, from Sarasota, said that decision struck her as “malicious.”

“Why are they making it so difficult?” she asked.

Rischer first applied for forgiveness in the fall of 2020 but had to submit her application a second time the following spring after KServicing introduced a new forgiveness application.

She kept calling and being assured that everything was fine, even as she began getting e-mails from KServicing telling her that she needed to begin repaying the money.

In September 2021, 10 months after she had first applied for forgiveness, Kabbage began asking for more documents, including utility bills, tax records, a lease and a copy of a voided check. Because the utility bills were in her name, Rischer had to provide a copy of her marriage license as part of the forgiveness application for her husband.

Despite all of that, both of their forgiveness applications were denied in September.

Rischer appealed, which meant more paperwork. She said the company sent her a document she was told she needed to sign that listed the amount of her PPP loan as $0. She pointed out the mistake, but says she was told to sign it anyway.

The PPP loans were a huge help for Rischer and her husband, whose work had completely dried up at the beginning of the pandemic.

“Getting this PPP loan allowed us to stay alive,” she said.

But after the agony of the forgiveness process —and worries about ruined credit — Rischer isn’t sure it was worth it.

All of Rischer’s friends in the modeling industry, who got similarly-sized loans at the beginning of the pandemic from different banks, have had their loans forgiven.

“They go to sleep,” she said. “Whereas I don’t know when this fight will end.”