Can you get sick with omicron twice? Yes, but it’s rare, study suggests. What to know 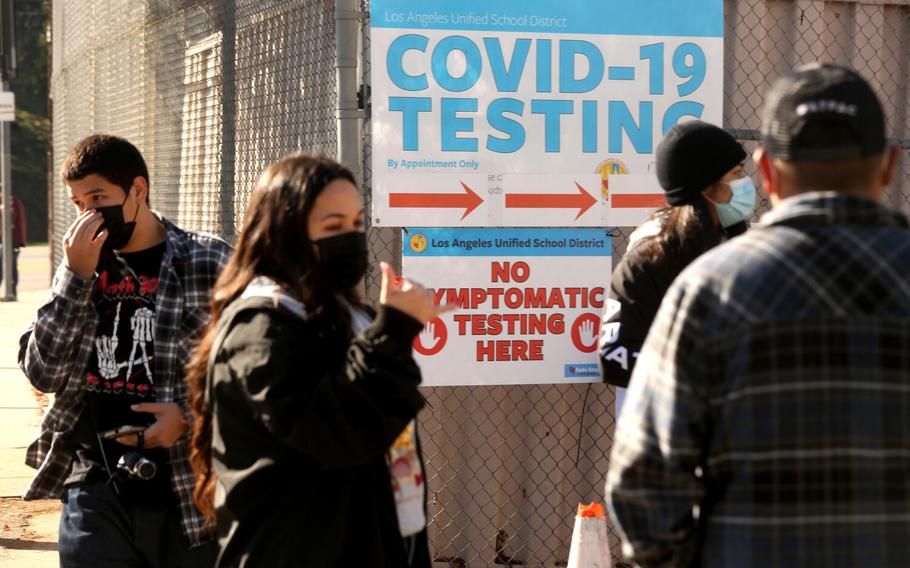 A Health Site Support worker, second from left, directs LAUSD students and staff who wait in line for a COVID-19 test at a walk-up site at the El Sereno Middle School in the El Sereno neighborhood in Los Angeles on Jan. 4, 2022. (Genaro Molina, Los Angeles Times/TNS)

(Tribune News Service) — Pandemic restrictions are easing in the United States, alongside declining coronavirus cases, but the virus is still around — particularly the omicron variant, which makes up a majority of cases across the globe.

A new study suggests you can get sick with omicron again after an initial infection of the variant, which itself is divided into subvariants, but it’s a rare occurrence.

After catching omicron subvariant BA.1, often called the original omicron strain that makes up most global virus cases, it’s possible to be reinfected with omicron subvariant BA.2, dubbed “stealth omicron,” soon after, according to a new Danish study published as a preprint on MedRxiv. It’s been submitted for publication and has not yet been peer reviewed.

These reinfections were found “mostly in young unvaccinated individuals with mild disease” that didn’t result in “hospitalization or death.”

Globally, there’s been a rise of reported BA.2 infections compared with BA.1 in recent weeks even as the spread “of all variants is reportedly declining,” the World Health Organization said in a Feb. 22 statement. In Denmark, BA.2 infections have surpassed BA.1 and dominate virus cases, SSI said in a news release about its study.

At least 47 Danish people have caught omicron twice from a BA.2 reinfection occurring shortly after a BA.1 infection, according to the research.

Here’s what else to know about the study:

In Denmark, more than 1.8 million COVID-19 cases were recorded between Nov. 21 — three days before omicron was first reported — and Feb. 11, the research noted.

Of these cases, 1,739 people tested positive for the virus twice “more than 20 and less than 60 days apart,” according to the study.

This sample was narrowed down to a randomly selected smaller one for sequencing, and ultimately 47 BA.2 reinfections after BA.1 were identified.

The median age for the 47 reinfection cases was 15, with the majority being under 20, and none were older than 38 when they got sick with omicron BA.1, study authors wrote.

Of those, 42 people were unvaccinated, three were doubly vaccinated, and two got only one COVID-19 vaccine shot. None needed to go to the hospital or died from catching the virus again.

Additionally, most, 53%, during the first omicron infection of BA.1 got tested after knowingly being exposed to a person who tested positive for COVID-19, while 47% got tested during their reinfection with BA.2 due to symptoms, according to the study.

Ultimately, a “reduced overall viral load” was observed in reinfections in which the BA.2 subvariant was responsible compared with the first BA.1 infection, meaning it’s possible there was “immunity obtained during the first infection,” according to the study.

“It is, however, striking that mainly children and adolescents become reinfected, since children to a higher degree than adults develop a sustained cross-reactive immunity,” researchers concluded.

“This may be explained by the very high incidences among children in the chosen study period, whereas adults and elderly had lower incidences.”

The study calls for “continuous assessment of length of vaccine-induced and/or natural immunity.”

More on the BA.2 subvariant

BA.2 should “continue to be considered a variant of concern,” the WHO said in its Feb. 22 statement.

BA.2 is more infectious than BA.1, early data has found, but not to the extent BA.1 was discovered to be more transmissible than the delta variant, according to the WHO, which acknowledged “studies are evaluating the risk of reinfection with BA.2 compared to BA.1.”

Based on early, real-world data from Denmark, South Africa and the U.K., “there was no reported difference in severity between BA.2 and BA.1,” the WHO said.

Still, BA.2 “is gaining ground in many places worldwide,” SSI said in its release.

Denmark’s preprint study comes after weekly average COVID-19 cases in the United States dropped by 43% as of Feb. 16 compared with the week prior, according to the Centers for Disease Control and Prevention.