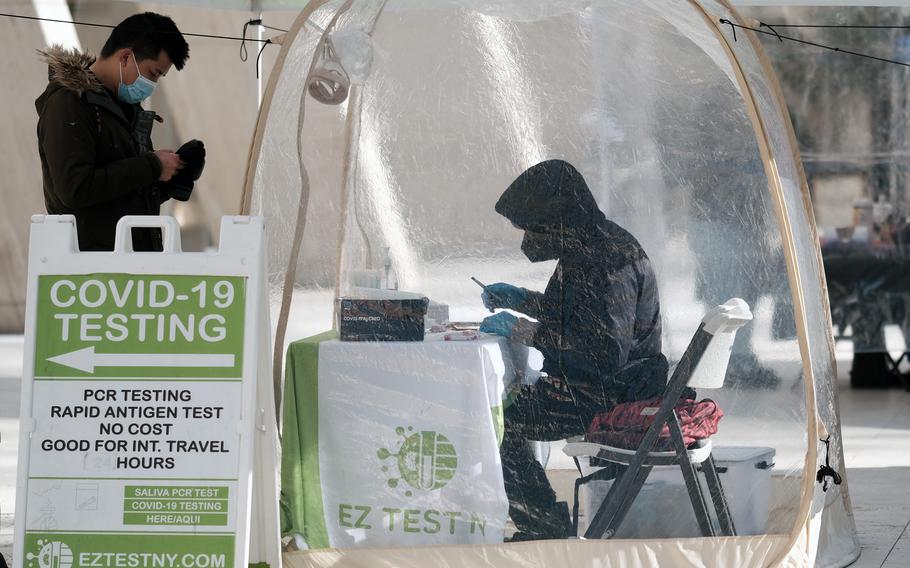 (Tribune News Service) — States and cities are dropping masking requirements. Federal officials say COVID is moving out of the crisis phase. But many people across the U.S. say that for them, the emergency continues.

On Thursday, California became the first state to announce it would treat COVID like an endemic disease and neighboring Washington said it would drop its indoor mask mandate. In the past two weeks, Illinois, New York and Washington, D.C., announced similar plans. Scarred by past surges and unconvinced that danger has truly abated, some workers, epidemiologists, and the still-vulnerable immunocompromised are playing it safe, no matter what their governments say.

California, which had been among the most restrictive states, let its indoor mask rule for the vaccinated expire in most places Wednesday. In a lunchtime crowd outside the Oasis Grill in downtown San Francisco, Dustyne Sutherland, 47, wore a tie-dyed cloth mask amid a sea of bare faces. “Just because it’s a lot of people right now,” she said. Sutherland also expects to continue masking at the grocery store, though she goes without one at the office. “It’s hard to break that habit after doing it for so long.”

For some, masking is a chore; for others, it’s a habit that will take effort to shake — and for those who live with preexisting conditions or an unvaccinated child, or who are otherwise vulnerable, it feels like a necessity.

Adults who remain at risk include the 3% of the U.S. adult population that takes immunosuppresive drugs, children under 5 who are too young to be vaccinated, and people who have diabetes, are obese or are over 65.

“That’s a big chunk of the population,” said John Schwartzberg, an infectious-disease expert at the University of California at Berkeley. “Almost every time we have a surge, we lift our mandates too soon,” Schwartzberg said. “That’s what we’re doing now, I think.”

Charis Hill, a disabled, immunocompromised activist in Sacramento, says seeing 70% of people maskless at the store this week was “terrifying.” California’s rule change means Hill will stay sequestered. “I can’t leave my home without being filled with terror,” Hill said.

California’s endemic approach relies on scanning wastewater to detect outbreaks, building stockpiles of masks and tests and maintaining capacity to vaccinate during future waves. “As case rates decline, we must be humble. We don’t know what COVID may bring but we’ve learned a lot,” Governor Gavin Newsom said in a tweet. “We are prepared without being paranoid about how to move forward in a world with COVID.”

Rochelle Walensky, director of the U.S. Centers for Disease Control and Prevention, spoke in similar terms at a White House briefing this week. ​​”We’re moving toward a time when COVID isn’t a crisis but is something we can protect against and treat,” she said.

Nationwide, thousands of people continue to die of or with the disease, including more than 3,400 the week ending Feb. 12. In California, an average of about 20,000 new cases have been recorded each day. Lifting mandates with cases at this level could mean that the next surge, whenever it comes, will be “worse than it had to be,” Schwartzberg said. “I regret that we don’t learn from our mistakes.”

Some officials across the country echoed his trepidation.

On Monday, the same day that Massachusetts public health officials eased mask recommendations, the state’s medical society called for caution. “It is not time to declare victory over the virus or to pronounce the pandemic ended,” Carole Allen, the group’s president, said in a statement.

Medford, a Boston suburb, lifted its own mandate Wednesday and set March 14 as the end for students and staff in public schools. Rebecca Norstrom, who has a preschooler at the city’s private Eliot-Pearson Children’s School, on Thursday called the decision “a little premature.”

“I probably will still wear masks indoors, even though they don’t require it. As a family, we’ll just continue that,” she said.

Workers who frequently interact with the public — many of whom have already had to enforce mask mandates at physical risk – expressed mixed feelings about their leaders dropping such rules.

Kim Cordova, president of of a United Food & Commercial Workers Union local in Wheat Ridge, Colorado, said she is “worried that we will continue to see workers die.” Her members include 23,000 workers at Colorado and Wyoming supermarkets, packing houses, food-processing plants and health-care facilities, as well as barbers and cosmetologists. Several died of COVID-19 at the JBS USA Inc. beef plant in Greeley, Colorado.

Washington, D.C., dropped its vaccine mandate for indoor venues on Feb. 15 and is removing the requirement to mask up at restaurants, arenas, churches and retail stores Tuesday. About 66% of the city is partially or fully vaccinated. Those 18 to 24 have the lowest vaccination rate at about 62%.

That puts additional pressure on business owners like Adam Waterreus, 39, who runs Lost City Books in the Adams Morgan neighborhood, a retail and nightlife strip.

“You become this messenger about rules to people that you didn’t used to be,” Waterreus said from the two-story shop where he has nine people on staff. He has no plans to remove the sign on the front door that’s been up since mid-2020, asking patrons to mask up before entering.

“It’s more to do with me making sure the staff feel comfortable and safe than it is anything else,” he said.

In Berkeley, California, David Scott, 52, has three kids, one of them a 5-year-old with asthma.

“It’s hard to take an arbitrary date and say everything’s going to be OK,” he said.

Still, “I respect people’s wishes to be free of the mask and kind of do what they need to do,” Scott said. He’ll give it a few more weeks, look at the numbers, and reassess. “Overall, I’m looking forward to coming out of this as well.”