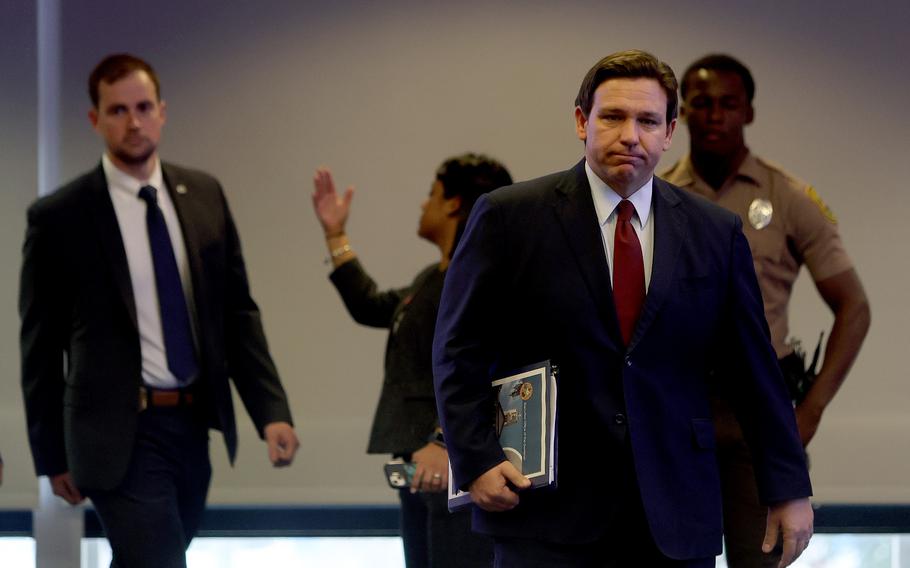 DeSantis is on board following discussions with state Rep. Randy Fine, who is proposing the budget measure, press secretary Christina Pushaw wrote in an email.

“The governor has been clear that he doesn’t want to take away any funding from students or teachers,” she wrote. “He is on board with the FEFP [Florida Education Finance Program] adjustment following discussions with Rep. Fine. The fines in this proposal would only impact administrators making $100k+, who were actually making the political decisions to force-mask children.”

On Friday, DeSantis said he would not support the idea, which has drawn complaints from the school districts and Democrats.

“My view would be let’s not do that,” DeSantis said during an appearance in Jackson County, when asked about Fine’s proposal. “But what you could do is say any parent whose kid was illegally force-masked this year in Florida in any of those districts, they should have the right to sue if their kids have any negative effects. ... They flouted the law and they should be liable for the consequences of their actions.”

DeSantis also remains committed to the idea of a private right of action for parents to sue if they think school mask mandates harmed their children, Pushaw said.

Fine, a Brevard County Republican, said on the House floor the governor is now supporting his proposal.

DeSantis issued a statement on Twitter on Tuesday about Fine’s proposal.

“Thanks to Speaker [Chris] Sprowls, Representative Fine, and the House of Representatives for heeding my call to protect students and teachers from accountability measures affecting union-controlled politicians and bureaucrats who defied Florida law by force masking kids,” DeSantis said in the tweet. “Most students don’t want to wear masks in the first place! Let’s also give parents recourse for harms imposed on their kids due to this defiance. They should get compensated by academic, social, and emotional problems caused by these policies.”