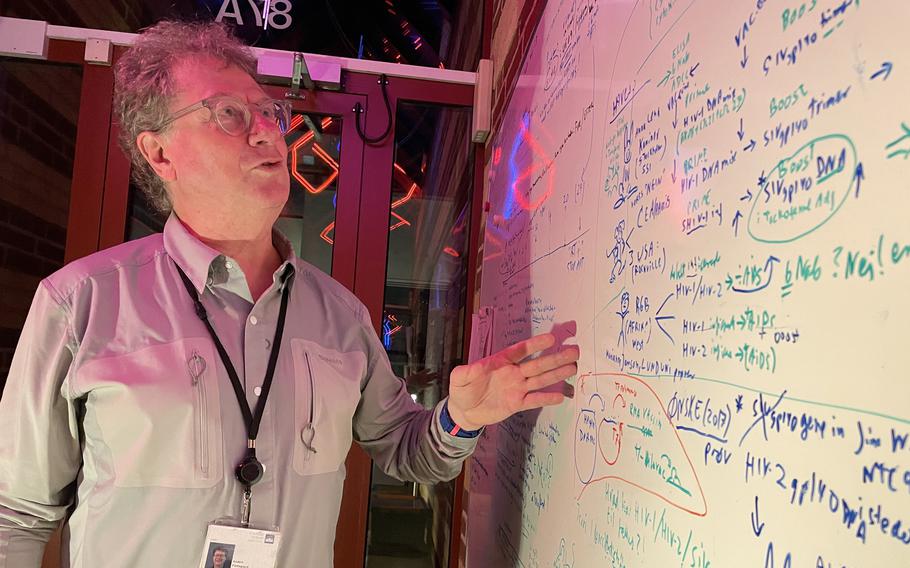 Anders Fomsgaard, a respected virologist in Denmark, says the world is five steps behind the coronavirus. (Chico Harlan/The Washington Post)

As a new version of the highly contagious omicron strain of the coronavirus spreads in parts of Asia and Europe, the World Health Organization recommended Monday that officials begin investigating its characteristics to determine whether it poses new challenges for pandemic-weary nations.

Known as BA. 2, the new version of the virus is a descendant of the omicron variant responsible for huge surges of covid-19 in the United States and elsewhere around the globe. Virologists are referring to the original omicron variant as BA. 1.

"The BA. 2 descendant lineage, which differs from BA. 1 in some of the mutations, including in the spike protein, is increasing in many countries," the WHO wrote on its website. "Investigations into the characteristics of BA. 2, including immune escape properties and virulence, should be prioritized independently (and comparatively) to BA. 1."

Viruses mutate constantly, mostly in harmless ways. There is no current evidence that BA. 2 is more virulent, spreads faster or escapes immunity better than BA. 1.

"Variants have come, variants have gone," said Robert Garry, a virologist at Tulane University School of Medicine. "I don't think there's any reason to think this one is a whole lot worse than the current version of omicron."

BA. 2 has been detected in India, Denmark and Britain, among other countries, according to health officials and media reports abroad. In Europe, it appears the most widespread in Denmark, but that may be because the Scandinavian nation has a robust program of sequencing the virus's genome.

At least three cases have been found in the United States at Houston Methodist Hospital in Texas, which also is studying the genetic makeup of virus samples from its patients.

But Musser said BA. 2 deserves close attention because little is known about it yet.

"We know that omicron . . . can clearly evade preexisting immunity" from both vaccines and exposure to other variants of the virus, he said. "What we don't know yet is whether son-of-omicron does that better or worse than omicron. So that's an open question."

On Monday, more than 695,000 new coronavirus infections were reported and testing shows that almost all are from omicron. Still, that total is down 13.7% from the week prior, according to a seven-day average of data tracked by The Washington Post.

A Biden administration official, who spoke on the condition of anonymity to discuss the situation, said Monday "there is concern about the omicron BA. 2 variant." The official, noting the increase in cases overseas, said the United States is preparing to evaluate BA. 2 here. The government is "paying close attention to the BA. 2 variant," the official said.

Anders Fomsgaard a virologist at the State Serum Institute in Denmark, said in an email Monday that BA. 2 has become the dominant form of the virus in his nation of nearly 6 million people, where it now accounts for about 65% of new cases as BA. 1 is on the decline.

At the same time, Fomgaard said, "we are not so concerned, since we so far do not see major differences in age distribution, vaccination status, breakthrough infections and risk of hospitalization. Also, despite the high infection rate of BA. 2, the numbers of hospitalizations [in] ICUs are decreasing."

The United Kingdom Health Security Agency identified more than 400 cases of BA. 2 in the first 10 days of January and on Friday designated BA. 2 a "virus under investigation," according to Al Jazeera. The agency said BA. 2 has been identified in 40 countries and "there is still uncertainty around the significance of the changes to the viral genome."

Some scientists have dubbed BA. 2 the "stealth omicron" because it has genetic traits that make it more difficult to identify the omicron form of the virus on PCR tests.

A French epidemiologist told Agence France-Presse that "what surprised us is the rapidity with which this sub-variant, which has been circulating to a great extent in Asia, has taken hold in Denmark."