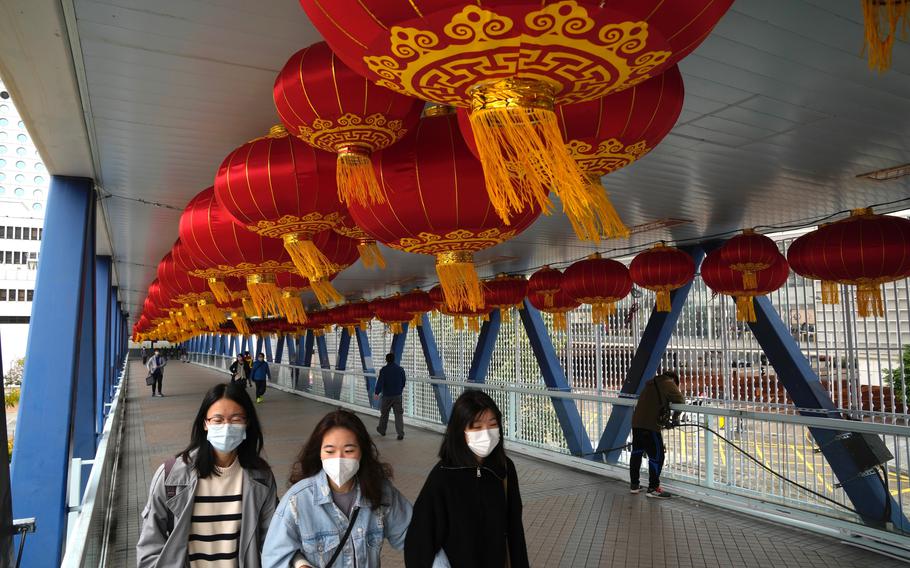 People wearing face masks, walk past decorations on a bridge to celebrate the Lunar New Year in Hong Kong, Tuesday, Jan. 18, 2022. Hong Kong police arrested two former flight attendants for allegedly leaving their homes when they should have been in isolation for possible coronavirus infections, which were later confirmed. (Kin Cheung/AP)

HONG KONG — Hong Kong police arrested two former flight attendants for allegedly leaving their homes when they should have been in isolation for possible coronavirus infections, which were later confirmed.

The two arrived from the U.S on Dec. 24 and 25. While in medical surveillance, they had "conducted unnecessary activities," according to a government statement posted late Monday.

While the statement did not name their employer, the arrests came after flagship carrier Cathay Pacific said it had fired two crew members for breaching coronavirus protocols. Both later tested positive for the omicron variant.

Cathay previously said the actions of the crew who had broken coronavirus protocols was "extremely disappointing" and apologized for the disruption. The company had to cut back on flights — both passenger and cargo — in January amid tightened virus curbs.

The duo have been released on bail and will have their case heard in court on Feb. 9. If convicted of violating anti-epidemic regulations, they could face up to 6 months imprisonment and a fine of up to 5,000 Hong Kong dollars ($642).

Hong Kong has been grappling with a local omicron outbreak traced to several Cathay Pacific crew members who had dined at bars and restaurants across the city before later testing positive for the omicron variant.

Previously in Hong Kong, certain air and sea crew members could isolate at home under certain quarantine exemptions. Regulations tightened Dec. 31 require crew members to isolate in a designated quarantine hotel for about a week to safeguard public health.