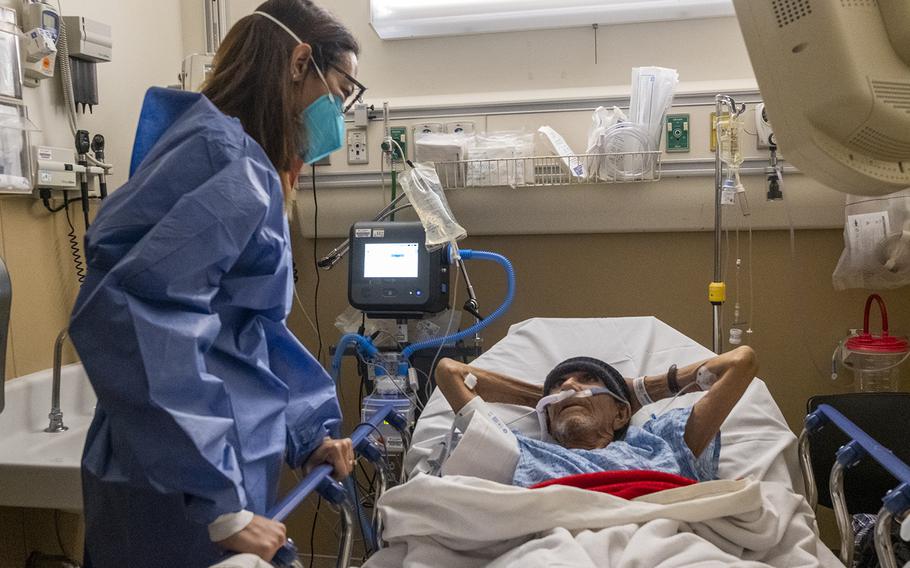 LOS ANGELES (Tribune News Service) — California has recorded more than 7 million coronavirus cases, after its fastest accumulation of reported infections in the history of the pandemic.

The unprecedented count, recorded in California’s databases late Monday, comes one week after the state tallied its 6 millionth coronavirus case.

Even during last winter’s disastrous wave, new infections increased more slowly. It took a little over three weeks for California to get from its 2 millionth cumulative coronavirus case to its 3 millionth.

The stunning speed of new infections is a testament to the omicron variant’s transmissibility, believed to be two to four times more contagious than the delta variant, which in turn was more infectious than earlier strains that pummeled California last winter.

California’s daily COVID-19 death rate has also risen dramatically. For the seven-day period that ended Sunday, the state was recording 103 deaths a day; that’s roughly double the last week of 2021, when 55 deaths a day were tallied.

At its worst, California’s COVID-19 death rate over a weekly period was 545 deaths a day, reached during late January 2021.

In Los Angeles County, the COVID-19 death rate has doubled in the last week. For the seven-day period ending Monday, the county was averaging 42 deaths a day; for the prior week, the average was 22 deaths a day.

While some health officials have said the recent COVID-19 deaths are likely the result of the delta variant, the L.A. County Department of Public Health in recent days has noted that many fatalities have occurred among people who were infected when omicron was clearly the dominant variant.

On Saturday, the L.A. County Department of Public Health said that “the majority of deaths reported this week are associated with individuals who became infected after Dec. 20, when omicron was circulating widely,” suggesting the variant may have a bigger role in COVID-19 deaths than initially believed.

The dramatic surge in infections is contributing to strained hospitals across swaths of California, many of which have said they’ve been forced to cancel scheduled surgeries amid crushing demand in emergency rooms.

The high rate of infections has also contributed to even scarcer staffing in hospitals. California’s state epidemiologist, Dr. Erica Pan, said last week that “we are seeing near-crisis levels” of emergency room overcrowding in certain areas.

With fewer hospital workers, it’s harder to admit patients from the emergency room, which then keeps ambulances waiting for long periods to drop off patients, resulting in a worsening of 911 response times to new callers, Pan said.

The number of overall patients admitted into hospitals for all reasons last week was nearing the state’s pandemic record. As of the middle of last week, there were some 52,400 patients in California’s hospitals, just shy of the record of 53,000 admitted during the worst of last winter’s surge, a time when many hospitals were overwhelmed.