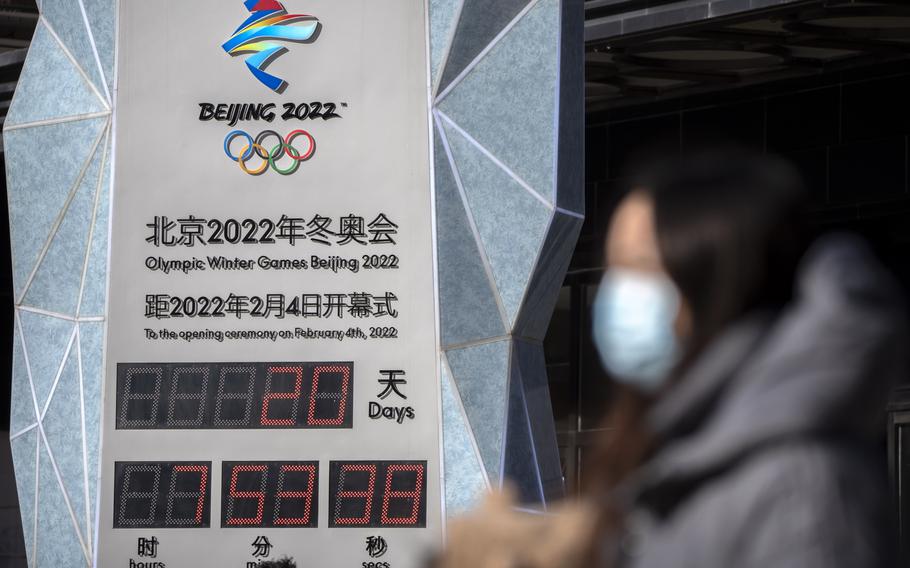 A woman wearing a face mask to protect against COVID-19 walks past a clock counting down the time until the opening ceremony of the 2022 Winter Olympics in Beijing, Saturday, Jan. 15, 2022. Beijing has reported its first local omicron infection, according to state media, weeks before the Olympic Winter Games is due to start. (Mark Schiefelbein/AP)

HONG KONG — Beijing has reported its first local omicron infection, according to state media, weeks before the Winter Olympic Games are due to start.

The infected person lives and works in the city's northwestern district of Haidian and had no travel history outside of Beijing for the past two weeks. The individual experienced symptoms on Thursday and was tested on Friday for COVID-19, officials said in a news conference Saturday during which they confirmed the infection.

So far, multiple cities in China have reported omicron infections, including Shanghai, the western city of Xi'an, cities in southern Guangdong province such as Zhuhai and Zhongshan, and the city of Tianjin, which is 30 minutes from Beijing by high-speed rail.

Officials across the country have urged residents to stay in their cities for the new year, instead of traveling back to their hometowns. China has adopted a strict "zero-Covid" policy, with authorities locking down residential compounds and even entire cities such as Xi'an when a local outbreak has been discovered in an effort to stamp out community transmission.

The Beijing patient's residential compound and workplace have been sealed off and authorities are mass-testing people linked to either location for the coronavirus. Some 2,430 people had been tested as of Saturday night, according to The Global Times, a state-owned newspaper.

China reported 119 new coronavirus infections on Saturday, of which 65 were domestic cases. The country has reported 104,864 infections since the beginning of the pandemic.