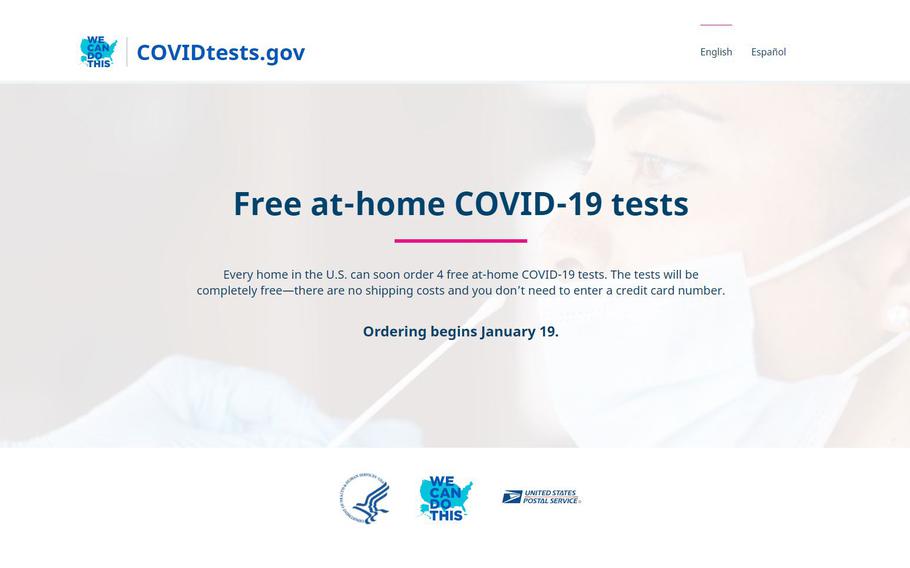 The website, called COVIDtests.gov, will require that Americans provide their names and addresses to receive the tests. The government purchased 500 million rapid tests that will be available to every household, and will limit to four the number of tests sent to each address, senior officials said during a briefing with reporters.

The officials said the tests would be shipped within 7 to 12 days after being ordered, a timeline that experts say means the tests probably will become available too late to significantly blunt the impact of the current omicron surge along the Eastern Seaboard, where the outbreak may be beginning to slow. But the tests could make a difference to the parts of the country that have yet to face the worst of the surge.

President Joe Biden announced Thursday that the government would purchase an additional 500 million tests to help prepare for future surges, meaning the government will eventually make 1 billion free tests available. The senior officials said the White House has worked closely with the U.S. Postal Service to help set up the website and ensure that the tests can be distributed.

Senior officials said their testing efforts would also be targeted to reach the hardest-hit and highest-risk communities. The administration is launching a free hotline for those without a reliable Internet connection, and said it would prioritize orders to communities “that have experienced a disproportionate share of COVID-19 cases and deaths, particularly during this omicron surge,” according to a White House fact sheet.

The White House has faced immense criticism in recent weeks for failing to anticipate the crushing testing demand ahead of the omicron surge. Unlike countries like the United Kingdom and Singapore, which began purchasing rapid tests in the spring and distributed them at low- or no cost to consumers, the United States did not begin purchasing the tests until the fall. A group of health agency officials proposed the White House purchase millions of rapid tests in the spring, but the White House never followed up on the proposal, The Post previously reported.

While experts have said rapid tests are a critical tool, both in the omicron surge and going forward, early research issued in late December by the Food and Drug Administration and produced by the National Institutes of Health said the tests “do detect the omicron variant but may have reduced sensitivity.” The real-world implications are not clear and still under investigation, but some rapid tests appear to be less reliable with the omicron variant.

The website is the latest step in a slate of actions the administration has taken to boost testing - steps experts have welcomed, even if they came too late in the current surge. Beginning Saturday, private insurance companies will have to cover the cost of up to eight at-home rapid tests per month. Consumers have to submit claims for reimbursement from their insurer, an often complicated process that could dissuade some Americans from following through.