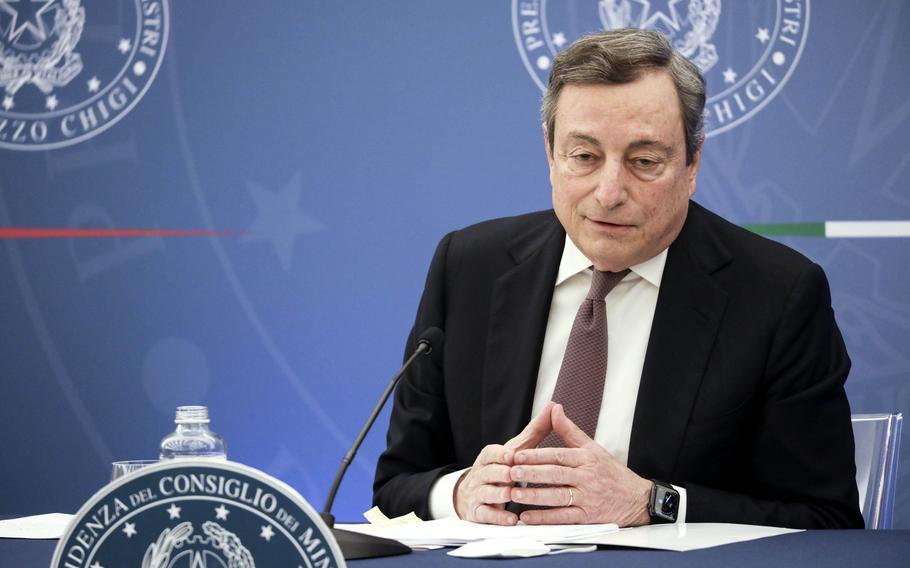 Mario Draghi, Italy’s prime minister, speaks during a briefing in Rome, Italy, on Monday, Jan. 10, 2022. Italy made vaccination compulsory for people over 50 and further reduced what the unvaccinated can do in its latest bid to fight the surge in covid-19 cases. (Alessia Pierdomenico/Bloomberg)

Italy's governing coalition is no longer bending to Mario Draghi's will the way it used to.

Senior party officials with knowledge of the state of play say that after guiding the country through the worst of the pandemic and laying the foundations for its economic recovery, the prime minister looks like he has taken his mandate as far as it can go.

As Italy struggled to rebuild from the trauma of the first wave of infections, he kept his coalition partners in line with the personal authority of his long career and by appealing to the national interest. Now the rival factions in his government are starting to look to a general election due next year at the latest and the contest to succeed Draghi. And that makes them harder to keep in line.

As a result, Draghi is signaling he'd rather make the switch to become Italian president when Sergio Mattarella's seven-year mandate expires in early February, the officials said.

In a press conference on Monday night, Draghi said he wouldn't discuss the Quirinal, the lavish palace where Italian presidents reside. He insisted the government was willing to work together despite diverging views.

The officials said that instead of listening to the views of all parties and then making unpopular decisions alone as Draghi has often done during the 11 months at head of a unity government, he's more willing to compromise.

The most conspicuous example came during a heated cabinet meeting last week, when the government decided to make it obligatory for people aged over 50 to be vaccinated against covid-19.

Draghi's still able to push through policy. But he's not calling the shots in quite the way he used to. Matteo Salvini's League wanted the measure to apply only to those over 60, while the Democratic Party wanted it to apply to the whole population. Draghi eventually just split the difference.

While the tougher political conditions are likely shaping his future plans, his apparent ambitions for the presidency may also be making him more reluctant to alienate potential allies, the officials said.

During the Monday night press conference, Draghi said "the government is willing to work together despite diverging views" and that "mediation should not be at all costs, but for some measures unanimity is important."

The premier said his government is still able to take controversial decisions, citing the reopening of schools in the face of opposition by regional governors.

"When people say 'Draghi doesn't take decisions anymore', well, we are showing together with the ministers that keeping schools open is a priority," he said. "This isn't how things were done in the past."

A spokesman for Draghi said he didn't have comment further beyond what the prime minister said.

Since being appointed by Mattarella last February, Draghi pulled Italy's querulous parties together, devised a spending plan for about 200 billion euros ($230 billion) of European Union recovery funds and led an aggressive vaccination push.

As president, he could play a long term role for the country's stability, which would be good news for investors. He could veto ministers and appoint his own successor, ensuring that the daunting reform program required to keep EU Recovery Fund cash flowing stays on track and that the fight against the pandemic -- which according to the latest numbers is far from over -- continues.

Draghi had long been touted as a favorite for the post of president, but it's far from guaranteed that he'll get it. Voting takes place through a complex series of secret ballots that has echoes of a papal conclave. And that, along with maneuvering by different factions, often leads to unpredictable outcomes.

If he were to get selected, Draghi would be making history: no one has ever gone straight from the prime minister's office to the president's Quirinal palace.

Justice Minister Marta Cartabia is seen as a possible contender for the post. Others include Pier Ferdinando Casini, former head of Lower House, and former Prime Minister Romano Prodi.

The center-right has been championing 85-year-old Silvio Berlusconi, another former prime minister, who leads Forza Italia.

Whomever is chosen, in the short term, Italy is set for a period of greater political instability.

Polls show no political party will command a majority in case of early general elections, though some including Salvini's anti-immigrant League are eager for his candidacy to succeed in the hope that they might win power.

The premium investors demand to hold Italian debt over Germany -- a key bond market gauge of risk -- remains near the highest in more than a year. Strategists from Societe Generale SA see that spread further widening to the most since July 2020, should Italian political stress intensify to a level akin to the 2016-2017 period.

A sale of 30-year Italian bonds last week saw above 55 billion euros of orders, less than two thirds that for a similar sale in October 2020, showing demand for debt has faded compared to the height of the pandemic.

Draghi doesn't want to move to Quirinal only to face a government crisis, the officials say, he wants to avoid a snap election and be replaced by someone who'll be able hold the fort for a few more months.