Chicago schools canceled classes after teachers refused to show up; will other districts follow?

CHICAGO (Tribune News Service) — In Chicago, a deadlock between the teachers union and the school district over COVID-19 safety has led to canceled classes Wednesday and Thursday for most of the district's 330,000 students.

The Chicago Teachers Union (CTU), which has roughly 25,000 members, voted late Tuesday to shift to remote learning until Jan. 18, or when cases fall. The union is concerned about what members see as inadequate COVID-19 safety rules and is demanding that the district require negative tests from students and staff before returning to school.

In response, Chicago Public Schools announced it would cancel classes Wednesday, neither offering in-person nor remote instruction. On Wednesday evening, it announced that classes would again be canceled Thursday because there aren't enough teachers to staff classrooms.

Experts say the conflict is far from surprising and a result of an already tense relationship between the union and district. And they predict it won't last long at a time when schools desperately need teachers and students desperately need in-person learning.

But it is evocative of the renewed tensions nationally between teachers' unions and district leaders over how to reopen classrooms and mitigate the coronavirus on campus.

The past decade in Chicago has seen tense budget disagreements and discussions of teacher layoffs, as well as conflicts over class sizes, the hiring of more social workers, nurses and librarians, and teacher evaluation processes. In 2012, the CTU launched its first strike in 25 years. Since then, it's staged walkouts every few years, most recently a six-day strike in 2019.

"About two and a half strikes in a decade's time period really set the stage for this most recent dispute, which is about COVID-19 but also includes all of the tension and drama that has been boiling up between the union and school district over the last decade," said Bradley Marianno, an assistant professor of educational policy and leadership at the University of Nevada.

Will the stalemate in Chicago last?

Coming to a reopening agreement for the school system agreement last February was a "long and hard process," Marianno said. And it resulted in what he called one of the most comprehensive COVID-19 protocol and reopening plans among any district nationwide. When that agreement came to an end in August 2021, the district and union were at odds over how to revise it, setting the stage for this week's conflict.

But due to public pressure from parents, Marianno doesn't expect the stalemate will last long. Instead, he said, "the district will have to cave to the demands of the teachers."

The worsening school staff shortage adds to the pressure, putting teachers' unions "in a better bargaining position than in the past," said Eunice Han, an economics professor at the University of Utah. "I'm guessing the school will not have much choice but to offer a remote online setting at least temporarily."

Melissa Lyon, a postdoctoral research associate at Brown University, said she would not be surprised for similar walkouts to take place among other teacher unions. The CTU has long served as a kind of bellwether for teacher union protests elsewhere, she said, including strikes in 2012 and 2019 that helped catalyze union action elsewhere.

"Since even the early days of teacher unionism, Chicago has been a key site for teachers' union action, and other unions are definitely watching Chicago to see how this plays out," she said.

It's certainly been a rocky start to 2022 in the education world. Districts big and small have been toggling back to remote learning this week, largely because of staff shortages and positive cases. Then there are the challenges associated with mass testing: The screening process takes time, space, people and, of course, the tests themselves.

While the situation in Chicago is unusual, union-district tensions are bubbling up across the country as the omicron surge and testing headaches throw schools into disarray.

After their school district decided to resume in-person learning Wednesday — following a last-minute delay earlier in the week — the teachers' union in Racine, Wis., released a list of demands, including for a temporary return to virtual learning.

The district proceeded with the plan to open classrooms Wednesday, and now the union's members are considering taking further action. That could involve letter-writing, lobbying and the filing of workplace safety grievances, said Angelina Cruz, the union's president. But so far, a strike is off the table.

In San Francisco, the teachers' union on Wednesday also released demands for the district, including that it distribute sufficient test kits and come up with a written plan for responding to positive cases. The district has been "inept and negligent" in its handling of COVID testing, said Cassondra Curiel, president of United Educators of San Francisco, in a statement. More than 620 San Francisco Unified educators were out on Tuesday.

The district plans on distributing test kits to all schools later this week.

Meanwhile, in Philadelphia, the teachers union is "outraged" about what it calls the district's "eleventh-hour" plan to switch dozens of schools to virtual learning. Families at many of those schools weren't notified until the early morning the day their children were slated to return to classrooms.

Jerry Jordan, president of the Philadelphia Federation of Teachers, had on Jan. 2 written a letter to the district calling for a seven-day pause on in-person learning amid the omicron-driven COVID surge.

"At nearly every level, today has been chaotic and entirely untenable," Jordan said in a statement on Tuesday. "From soaring cases to massive staffing shortages in open buildings, the current situation is untenable." According to the union's data, more than 90% of Philadelphia's schools are grappling with shortages, and more than half lack sufficient testing supplies.

"It is clear that the omicron surge in the Philadelphia area is adding yet another layer of complexity to challenges we have been experiencing since the start of this school year," the district's superintendent told the local FOX affiliate. "Yet despite these challenges, one thing remains clear — in-person learning is essential for the physical, social, emotional and academic well-being of our students, especially after nearly two years of trauma caused by the pandemic and other matters."

Some experts believe it's unlikely that teachers' unions will take things as far as Chicago's, especially given the renewed interest in the importance of in-person learning.

But if the chaos continues, some unions may feel a virtual "walkout" is their only choice.

"There's good reason for teachers to raise concerns about needing to have high safety standards, but the choice to close schools is a highly impactful one," said Matthew Kraft, an education and economics professor at Brown University. "And it's it's really, really sad that we've come to a place where it feels like that's the only avenue open to try to address those challenges in the short-term." 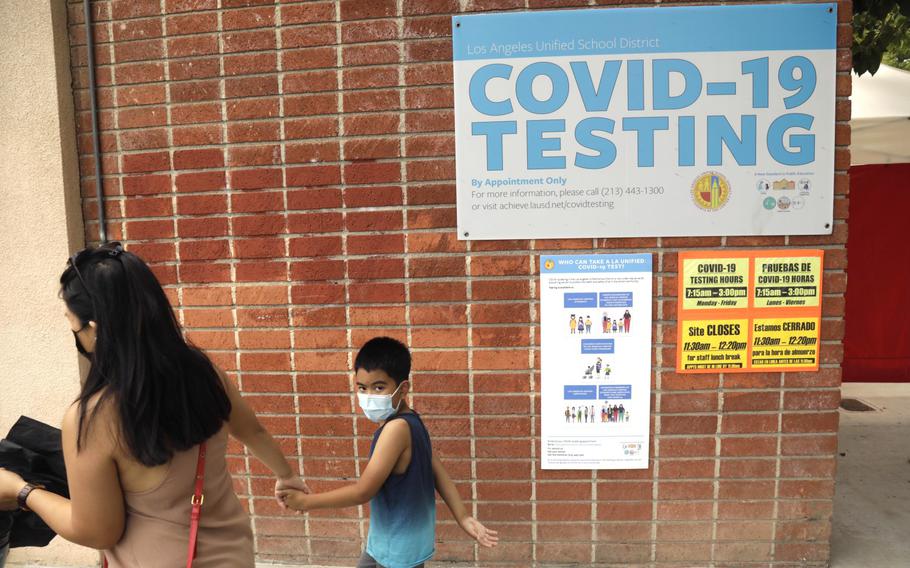 Skyzell Touch, 6, is pulled along by his mother, Raizah Touch, as the first grader goes to be tested for COVID-19 before he begins to attend classes on Monday at Northridge Middle School in Northridge, Calif., on August 11, 2021. In Chicago, a deadlock between the teachers union and the school district over COVID-19 safety has led to canceled classes Wednesday and Thursday for most of the district’s 330,000 students. (Genaro Molina, Los Angeles Times/TNS)