US schools rush to expand COVID-19 testing after holiday surge 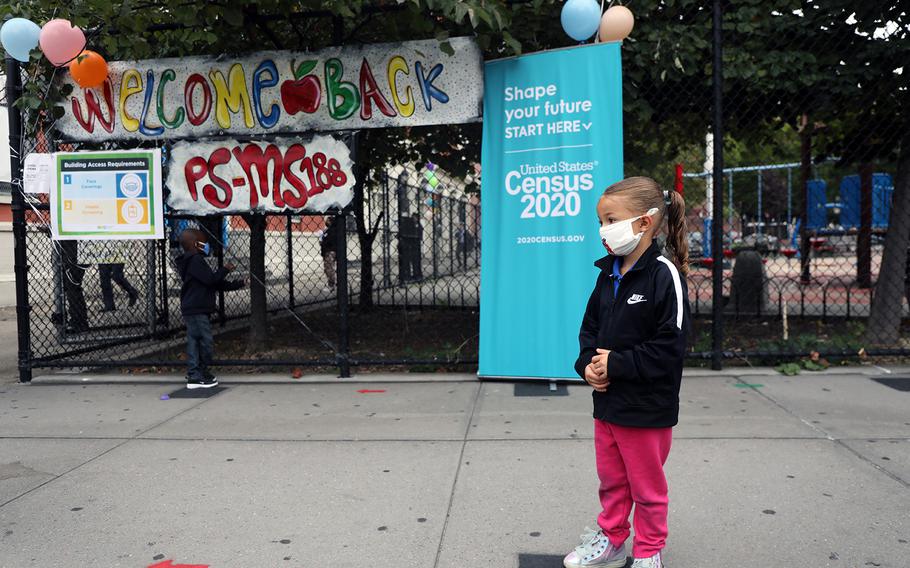 Elementary school students are welcomed back to P.S. 188 as the city's public schools open for in-person learning on Sept. 29, 2020, in New York City. Some children throughout the nation will be greeted with a new ritual when they return to school after the holidays: COVID-19 testing. (Spencer Platt, Getty Images/TNS)

(Tribune News Service) — Hundreds of thousands of U.S. students and staff will face a new ritual as they return to school after the holiday spike in COVID-19 infections: ramped up testing.

In Washington, D.C., all students and staff must provide proof they are COVID-negative before re-entering schools on Jan. 5. In Chicago, the public schools are hustling to process more than 37,000 tests before the return to classes on Monday — the flood is so great that delivery boxes in some areas were overflowing.

Many other districts are sending free rapid tests and encouraging — but not mandating — their use. Massachusetts plans to distribute 200,000 kits to school employees, although like many institutions across the country it’s facing supply constraints.

“I know the anxiety is high,” Chicago Public Schools Chief Executive Officer Pedro Martinez said on Thursday. “As long as we continue to work together with our parents we are going to get through this surge.”

The massive testing effort aims to keep students in school even as the omicron variant has been rapidly lifting national case counts to record-breaking levels, approaching half a million day-after-day through the holidays.

Chicago, which has the third-largest school district in the U.S., earlier this month sent at-home tests to about half of its 330,000 students, particularly focusing on the city’s most vulnerable neighborhoods. After the flood of returned tests this week, it extended the deadline by two days, Martinez said. The district has also added contact tracing nurses.

Chicago’s daily COVID-19 positivity rate has topped 17%. Schools that are taking proper precautions are not primary drivers of cases but the rate among children is likely to reflect that in the community, according to Chicago Public Health Commissioner Allison Arwady.

Amid the spike, the Chicago Teachers Union has suggested adding more measures or delaying the return to in-person learning to step up precautions.

“We want to be in our buildings educating our students, but we have a right to rigorous layered mitigation that ensures that we’re also not sacrificing our lives for our livelihoods,” Jesse Sharkey, president of the union, said in a statement on Thursday.

In New York, students in the nation’s largest school system are set to return to in-person classes on Monday. New York City Mayor-elect Eric Adams, who is set to be sworn-in early Saturday, Gov. Kathy Hochul and outgoing Mayor Bill de Blasio announced a plan earlier this week to double testing of schoolchildren and to send home millions of tests to ensure the safe resumption of classes.

Adams also said his administration would study whether a vaccine mandate is necessary for public school students, though he added that the current case count in schools does not warrant those measures. A vaccine mandate for students would fall under the purview of the state.

The Cleveland Metropolitan School District is shifting to remote learning for the week of Jan. 3 given the surge, according to its website. Los Angeles Unified School District, the nation’s second-largest, will continue with weekly Covid testing for all students when they return on Jan. 10. At the end of the month, that policy will change and the district will only test the unvaccinated every week.

Among exceptions to the school testing push is Florida, where Governor Ron DeSantis has drawn criticism for policies that hinder local efforts to prevent the spread of the virus. Laws that the Republican governor signed in November make it illegal for school districts to mandate face masks for students or require them to quarantine if exposed to Covid. State health department rules only allow schools to test a child for the virus with the written consent of a parent.

The patchwork of testing measures across the country shows the lack of a unified federal policy on COVID-19 prevention, said Emily Landon, a professor who specializes in infectious diseases at the University of Chicago Medicine. States, cities and districts are scrambling to figure out the best way to prevent the spread and keep classrooms open, she said.

“It makes sense to ask people who have potentially traveled, who’ve been mixing with people outside the school to get a negative test before returning,” Landon said.

In Vermont, the state is distributing tens of thousands of rapid tests to families of schoolchildren to take on a voluntary basis.

“Testing your child before school starts gives you peace of mind and will slow the spread of COVID-19 in our communities,” Gov. Phil Scott said in a statement.