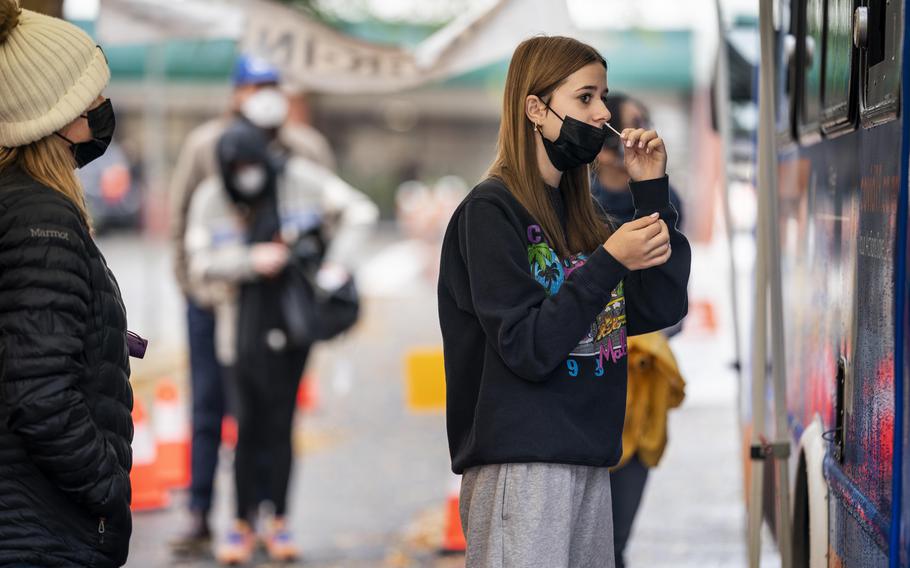 With the accuracy of rapid tests in question, it's harder for health officials to establish policy such as the duration an infected person should stay in isolation. Still, testing is a highly effective tool in detecting spread. (Melina Mara/The Washington Post)

As the coronavirus spawns a record-breaking wave of infections, new research suggests that rapid tests widely used to identify potential covid-19 cases might be less effective at identifying illness caused by the swiftly spreading omicron variant.

The finding is the latest complication for anyone trying to strike a common-sense balance between being vigilant and returning to normalcy as the country approaches the third year of the pandemic.

The research, issued Tuesday by the Food and Drug Administration and produced by the National Institutes of Health, said the rapid antigen tests — which have been in high demand and often hard to find this holiday season — "do detect the omicron variant but may have reduced sensitivity."

Although rapid tests showed reduced sensitivity to omicron compared with earlier variants in a lab study, the real-world implications are not clear, said Bruce Tromberg, director of NIH's National Institute of Biomedical Imaging and Bioengineering and lead of RADx Tech, the joint FDA and NIH effort to speed up development of diagnostics.

President Joe Biden has promised to distribute 500 million rapid tests to the American public. People should still use these tests regularly, Tromberg said, because although they may be less sensitive than originally thought, they remain a highly effective tool for combating an extremely contagious virus.

"The diminished sensitivity from the [lab experiments] pales in comparison" with the increased transmissibility of omicron, Tromberg said. "Even with reduced performance, it will still pick up infections and it will help individuals get treatment sooner."

There are plenty of infections out there — a record number in fact. The seven-day average for daily new infections jumped to 301,000 Wednesday, up from about 89,000 on Dec. 1, according to health department data compiled by The Washington Post. Hospitalizations have increased more modestly, to about 85,000 confirmed or suspected covid patients, but that is still well below the level of last year's winter surge. Deaths are up as well, with a seven-day average of 1,532 deaths each day.

The FDA said it has always known antigen tests overall are less sensitive than the PCR molecular tests, which are typically performed in a lab and have about 98% accuracy. If people have symptoms consistent with covid-19 and get a negative rapid test result, the agency recommends a follow-up PCR test.

The news on the rapid tests came in a busy week of updates, revisions and recalculations. On Monday, the Centers for Disease Control and Prevention issued new guidance that lowered the isolation recommendations for people infected with the coronavirus, and who are asymptomatic or showing improvement in symptoms, from 10 days to five.

Quarantine — the period for people exposed to someone known to be infected — dropped by the same amount for people who are vaccinated but not yet boosted. Those who have received a booster shot do not need to quarantine but should wear a mask.

The altered guidance, ambiguous research findings and continuing unknowns about omicron — and, perhaps most of all, the overwhelming desire after two years of a pandemic to return to normal life — have left people once again in the predicament of making personal risk calculations that may be not terribly better than wild guesses.

Those calculations can take into account increasing evidence that omicron, the variant causing the majority of new infections, is less likely to cause severe illness, Anthony Fauci, Biden's chief medical adviser for the pandemic, said Wednesday in an interview with The Post.

"It may turn out that omicron, at least among those who are vaccinated and/or previously infected, is going to turn out to be more of a bothersome upper-respiratory infection than something that causes the degree of morbidity and mortality that we've seen with other viruses," Fauci said.

But for people who are unvaccinated and have not been infected previously, he cautioned, "It is not going to be just a common cold."

So what about New Year's Eve? Party? No party? Fauci's guidance is to keep it small, ideally with family and close friends known to be vaccinated and prudent in their behavior.

"You can't ask the American public to lock themselves in their closet alone for New Year's Eve. Because that's the only way you're going to be completely without risk," he said.

And don't get too wild. In a White House briefing Wednesday, Fauci offered a vision of what's too risky: "If your plans are to go to a 40-to-50-person New Year's Eve party with all the bells and whistles and everybody hugging and kissing and wishing each other a happy new year? I would strongly recommend that this year we do not do that."

The new information and guidance on testing accuracy, isolation requirements, rising case counts and changes in virus pathogenicity are a lot to take in, and there is some inherent ambiguity to some of this. For example, the latest guidance from the CDC states that people who have tested positive can stop isolating after five days if they are asymptomatic or their symptoms are "resolving" — which can be a subjective assessment.

"There's a big difference between having a policy that is just based on people not having symptoms versus one that says your symptoms are resolving. That's as vague as it gets for a guidance," said Walid Gellad, professor of medicine at the University of Pittsburgh. "I did not understand what that means."

CDC Director Rochelle Walensky said the decision was based on a growing body of science, as well as internal agency modeling, showing that people are most infectious over a five-day period that starts about two days before symptoms. Transmissibility drops dramatically after that.

After five days, the rapid tests are not likely to be sensitive enough to be reliable indicators of whether transmission is happening, Walensky said. The PCR tests, meanwhile, are more accurate in detecting the presence of the virus but are so sensitive they can identify traces of the virus many weeks after a person is no longer infectious.

Some outside experts also have questioned why the CDC is not calling for people to have a negative test - a rapid test or a PCR test - before exiting isolation.

Questions about the accuracy of rapid tests factored into the decision to not recommend a negative test before exiting isolation, Walensky said in an interview with The Post. She said the CDC saw unclear results when people performed the tests three days in a row. The tests also don't indicate how transmissible a person may be later in their infection, she said.

"We actually don't know how well it works and its predictive value when we use it as an individual test for the purposes of transmissibility later in disease," Walensky said.

Scott Gottlieb, a former FDA commissioner who is on the board of drugmaker Pfizer, said it is reasonable to adjust the official guidance given the fluid nature of the pandemic and the mutations that have given the virus a different level of transmissibility and virulence. But he said the messaging has not always been clear.

"It makes sense that we'd approach this wave differently, but we've struggled to explain that effectively, or to make accommodations for how we'll continue to protect the pockets of vulnerability that remain, especially people who have weakened immune systems and young children who haven't been offered vaccines," Gottlieb said.

"We haven't used all the tools we have to allow people to adjust the measures they should be taking based on their individual risk," Gottlieb said.

Officials said masks remain important, along with booster shots for people who are vaccinated and eligible for another shot. And officials emphasized overwhelming evidence shows vaccination creates a much better layer of protection against severe illness. The CDC said people exiting isolation and quarantine should wear a mask for an additional five days to reduce any risk of transmissibility that may remain.

This week's guidance on isolation and quarantine followed updates the agency issued for health-care workers last week to stave off staff shortages. Some experts lauded the move, while some doctors and nurses said they could wind up being forced to work when still sick.

Omicron accounts for about 59% of new infections, according to new estimates from the CDC — a lower percentage than the agency reported earlier this month. The trend is still remarkably vertical and a sign that omicron is rapidly overtaking the delta variant.

Walensky said infections have increased 60% during the past week, while hospitalizations have risen only 14%. Hospitalizations always lag behind the rise in infections amid a wave of cases, but Fauci said multiple lines of evidence, including laboratory experiments on mice and hamsters, suggest the omicron variant is innately less likely to cause severe disease than previous variants.

That fundamental change, possibly attributable to the omicron variant of the virus remaining high in the respiratory tract and not penetrating deep into the lungs, may be combining with widespread immunity in the population to create the lower rates of severe disease, he said in the briefing.

The Washington Post's Jacqueline Dupree contributed to this report.