CDC warns against cruises, regardless of vaccination status 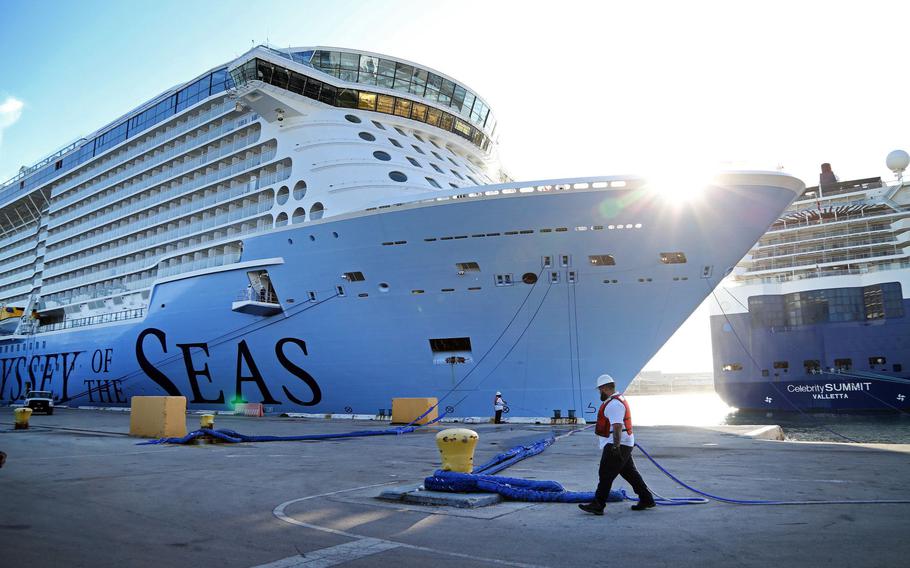 Royal Caribbean’s Odyssey of the Seas, pictured at Port Everglades on June 10, 2021 in Fort Lauderdale, Florida. Fifty-five people have contracted COVID-19 on on the ship in late December. (Susan Stocker, Sun Sentinel/TNS)

Shares of cruise operators fell after U.S. health officials said travelers should avoid them even if they’re vaccinated.

The Centers for Disease Control and Prevention raised its travel alert on cruise ships Thursday to the highest-risk level, saying Covid-19 spreads easily between people aboard in close quarters. Even people who are fully vaccinated may be at risk of getting and spreading the virus, the agency said.

Shares of Carnival Corp., Royal Caribbean Cruises Ltd. and Norwegian Cruise Line Holdings tumbled on the news. Covid cases have been reported on 94 cruise ships in U.S. waters, and nearly all of those outbreaks have met the threshold for a formal investigation by the CDC.

“Since the identification of the omicron variant, there has been an increase in the number of Covid-19 cases among cruise passengers and crew reported to CDC,” the agency said on its website.

The omicron-fueled surge in Covid cases has drawn calls to halt cruise operations. Some ships have been reportedly denied entry at various ports after passengers and crew tested positive for the virus.

The Cruise Lines International Association trade group said in an email that the CDC recommendation “is particularly perplexing” since the number of cases identified on ships “make up a very slim minority of the total population onboard -- far fewer than on land.”

“No setting can be immune from this virus,” the group said.

In an email, Carnival said it doesn’t plan any schedule changes.

As part of its investigations, CDC reviews case-exposure histories on ships, details about close contacts, traveler vaccination rates and onboard medical resources. While cruise operators have implemented safeguards including proof of vaccination on most ships, the fast-spreading omicron variant appears to be more contagious than prior variants and causing more breakthrough infections.

Carnival shares fell 0.8% at 12:50 p.m. in New York. Royal Caribbean dropped 0.4%, while Norwegian slid 1.7%. Out of the three, only Royal Caribbean shares have risen this year and their 4% advance is significantly behind the 28% gain in the broader S&P 500 Index.

Earlier Thursday, Royal Caribbean reported a decline in bookings and increased cancellations for near-term sailings since late November, but to a lesser degree than during the delta variant.