As omicron washes over America, much of the country still isn’t using exposure notification apps 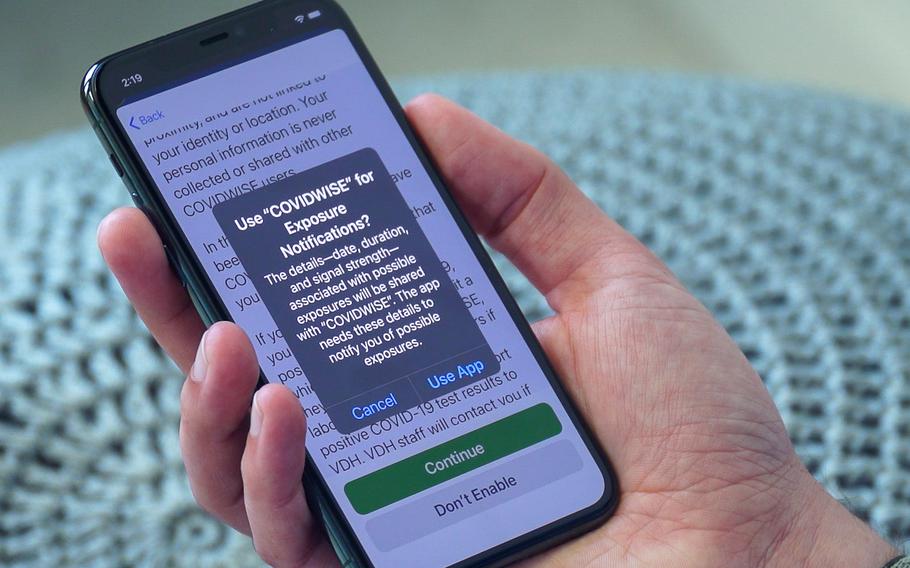 In the early months of the pandemic, engineers from Google, Apple and a handful of other tech companies got together to build a system to notify people if they’d come in contact with someone who had tested positive for the coronavirus. Governments around the globe had been clamoring for the two companies, which control the operating systems of the world’s smartphones, to make it easier to use phones to track the spread of the deadly virus.

The tech giants managed to build and launch the “exposure notification” framework in months, a previously unheard-of level of collaboration for the rivals.

It was a “land speed record for software development,” said Myoung Cha, who worked on the project as Apple’s head of strategic health initiatives. He left Apple and became president and chief strategic officer at San Francisco-based health-care start-up Carbon Health in June.

But nearly two years later, as the omicron variant sweeps across the United States, adoption of the system is still far behind what its creators and proponents envisioned. More than 20 states don’t use it at all, including large states like Florida and Texas that have reported millions of cases and tens of thousands of deaths. Even in states where millions have activated the notifications, only a fraction of people who test positive for the virus report it to the Apple and Google system. California’s system, for example, has been activated on more than 15 million devices, but only about 3% of the nearly 3.9 million cases reported since launch were logged in the system.

The highly anticipated tool has failed to fully live up to its promise of slowing the virus′s spread, just as a burdened public health system is in sore need of new techniques. The seven-day average of new daily cases on Tuesday afternoon hit 253,245, the highest since the beginning of the pandemic. Traditional contact-tracing systems, requiring human workers to individually call potentially infected people, have been overwhelmed. People who test positive with at-home tests, which are becoming more popular as people avoid massive lines outside government and private testing centers, still can’t upload their results to the system in most of the states that use it.

“The Biden administration, when they came into power, put almost all their chips into the vaccines as their silver bullet to beat the virus,” Cha said. “I think that was strategically the biggest mistake.”

Cha and others spent months holding hundreds of meetings with officials from both state and federal governments, on top of efforts to get other countries around the world to use the system, too. When the delta variant of the virus began to increase hospitalizations and deaths during the summer, the White House mounted a massive push to get more people vaccinated, enlisting celebrities like Olivia Rodrigo and spending millions on advertisements to encourage vaccination. But there was little focus on testing or contact tracing, let alone the role technology could play in improving those processes.

The White House referred The Washington Post to the Centers for Disease Control and Prevention, where officials were not available for an interview. The CDC has developed a website to give state and local health authorities guidance about contact tracing, which says digital tools can be used to support these efforts.

As they launched in some states, exposure notification apps have rarely been accompanied by large advertising campaigns.

Early in the pandemic, public health officials put most of the attention on social distancing and masking. In 2021, as vaccines became more available, public messaging shifted toward encouraging people to get vaccinated.

The apps are “not really talked about as part of the mitigation strategy,” said Kameka Dempsey, a co-chair of the Covid-19 Technology Task Force, a group of prominent technologists and venture capitalists working on efforts to combat the virus.

The task force ran an ad campaign from January to April to increase awareness of the apps. But the initiative was volunteer-led, and had significantly less funding than government-led efforts to raise awareness about vaccines. Dempsey said that there needs to be a national strategy for using exposure notifications, and that they should be seen as one of many tools to fight the virus, along with vaccines, testing and new drug therapies.

As those anti-viral treatments become more widely available, the exposure notifications system could also be used to alert people that prescriptions for those drugs are available, and give them information on where to get them, Cha said.

This slow adoption has also led to a chicken-and-the-egg situation, where poor data on the apps’ efficacy makes it difficult for states to justify spending limited resources on them.

Karen L. Howard, the director of science and technology assessment at the Government Accountability Office, said that she believes more states would have adopted the apps if there was more evidence that they were augmenting contact tracing efforts. But so far, the data is “murky.”

“We don’t have the data to say whether or not they’re effective or could be effective,” said Howard, who co-authored a September study on the benefits and challenges of the apps.

The GAO found there was little data to evaluate the effectiveness of the apps in helping people to know when to quarantine or otherwise limit outbreaks of the virus. The study found there were technical limitations to using phones to accurately measure if someone came in contact with an infected person, and that many people had major privacy and security concerns about opting into the system.

The GAO study also found some state officials were concerned about marshaling key funds and resources away from other efforts, like vaccination drives, to support an unproved technology. Other largely rural states were concerned that a lack of cell service coverage would render the systems useless.

The system works with Bluetooth, so it doesn’t need constant cell coverage to log which phones someone comes into contact with, but it does need an Internet connection to receive exposure notifications. Still, roughly 15% of Americans don’t have a smartphone, according to a Pew Research Center survey. Among older people, who are most at risk from the virus, smartphone use is even lower.

“Because there was no good news story coming out of states that were using them, the states that were a little slower to move along or had concerns about costs or adoption rates didn’t ever get that reason to jump on the bandwagon and deploy them,” Howard said.

Other states took active steps to prevent phone data from playing a role in contact tracing. Kansas passed the Covid-19 Contact Tracing Privacy Act, which stated contact tracing may not use any information collected through cellphone tracking.

There is mounting evidence, however, that the apps do work when large numbers of people use them. A February 2021 study from researchers at Oxford University said an exposure notification app for people in England and Wales had likely prevented 600,000 coronavirus cases. At that point, more than 56% of eligible people were using the app. Their research also showed a 2.3% reduction in cases for every 1% increase in the number of app users.

An earlier study, published in September 2020, by researchers from Oxford and Google’s internal research team, showed even usage rates of 15% could reduce the spread of the virus.

Colorado Department of Communications spokeswoman Jessica Bralish said the notifications are an important tool amid the rise of new variants. Between Nov. 19 and Dec. 2, Colorado residents logged 4,087 cases using the system, which accounts for about 12% of all cases the state reported in the same time period. And more than 45,000 users clicked through to view instructions after they received a notification that they were exposed.

But simply downloading an app or turning on notifications is not an adequate measure of whether the system is actually impacting people’s behavior. The California Department of Public Health said in a statement that there’s preliminary analysis that shows its notifications have prompted people to take actions that would potentially prevent the spread of infection and save lives. In optional surveys, 20% to 30% of respondents said they planned to get tested after receiving an alert. And 95% said they would take other protective measures, like staying home, avoiding public places and monitoring themselves for symptoms.

There have been very real privacy concerns about digital contact tracing since the beginning of the pandemic. Some countries designed their own systems without Apple and Google’s help that collected much more data on people. Singapore was one of the first countries to design a contact tracing and exposure notification app on its own, and though officials promised it would only be used for controlling the pandemic, the government later said that police had access to the data for criminal investigations.

Lingering concerns about the apps’ impact on privacy could also be limiting adoption. Apple and Google already collect reams of data on their users to help feed their advertising businesses. Both companies insisted from the beginning the exposure notification system was anonymous, and outside experts have vetted it. But the idea of mixing personal health data with Big Tech still makes many people nervous.

Howard said the systems might be more effective in the United States if there was a federal privacy law that would make more people comfortable that their data would only be used to track the spread of the virus, and not be misused for other purposes.

Public health authorities also have limited access to key data, such as details about where or when an exposure occurred, due to the privacy protections that the tech companies implemented amid public concerns.

“You can’t know whether a notification occurred at a time when you might have been pretty well protected versus not as well protected,” Howard said. “And in addition the states don’t know who downloaded it, where they are located.”

Howard said in her discussions with state authorities, there was hesitancy about partnering with tech giants, given recent media coverage of large Silicon Valley companies mishandling users’ data.

“Because we didn’t have that national response, tech companies stood up and filled the gap,” Howard said. “But that also allows Apple and Google to set the policy. So instead of the policy being driven at a national level, it’s being driven by the tech companies. That’s a question that we in the United States need to ask ourselves, is that where the policy should be driven?”