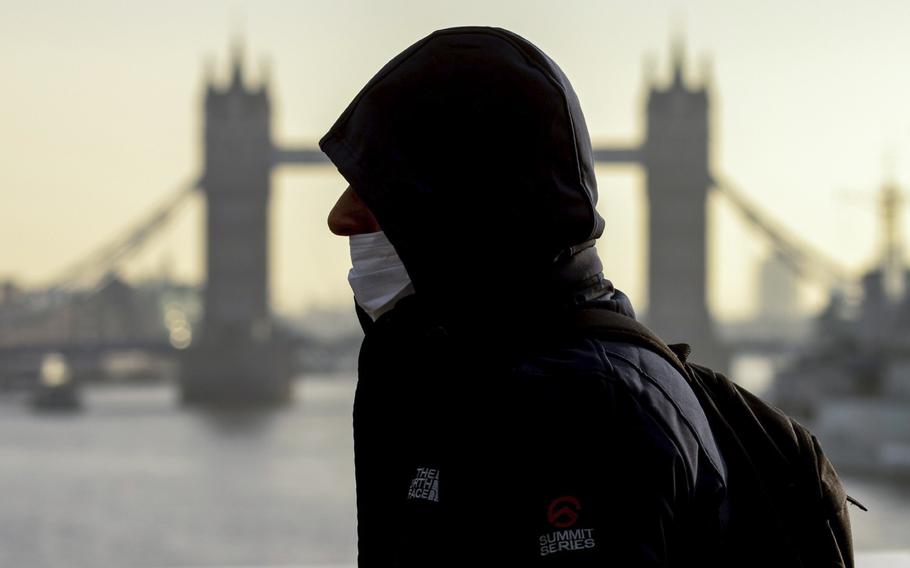 A commuter passes in view of Tower Bridge in London on Nov. 29, 2021. (Jason Alden/Bloomberg)

Europe’s biggest countries are introducing more curbs to fight a surge in COVID-19 infections, from another lockdown in the Netherlands to stricter travel restrictions at the height of the holiday period.

The continent faces a critical week of decisions that could disrupt people’s Christmas and New Year’s plans as the spread of the highly-transmissible omicron strain slams already weary populations. At the same time, a debate continues to rage over whether the omicron variant produces milder illness than previous strains, and how to effectively combat the mutation.

Germany designated the U.K. as a virus variant area from Monday, the highest risk category, requiring incoming travelers to undergo a mandatory 14-day quarantine, regardless of their vaccination status. France is considering health passes at work, and Israel added the U.S. and other countries to a list of banned travel destinations.

As omicron cases surge in the U.K., the country faces the politically perilous decision whether to tighten restrictions. Health Minister Sajid Javid has declined to rule out such a move before Christmas, but Prime Minister Boris Johnson — who previously called the end of curbs “irreversible” — would likely face further rebellion from his own ranks should such steps come into effect.

European nations have taken a varied approach to counter the winter COVID wave, but most have emphasized the importance of accelerating vaccination and booster campaigns. Much of their efforts are focused on not repeating the experience of the U.K., where total COVID infections rose by about 50% in a week to touch a record 93,000 on Friday.

In the U.S., President Joe Biden is planning to warn the nation on Tuesday of the perils of remaining unvaccinated, though his chief medical adviser said the prospect of further lockdowns in the U.S. are unlikely even as the omicron variant has now reached almost every state.

Here are the steps countries have taken or are discussing:

U.K. advisers have told the government that new measures are needed within days to protect the health care system. Javid said there are “no guarantees” in the pandemic, referring to the possibility of a so-called circuit-breaker lockdown.

A key minister, Lord David Frost, quit over the weekend, and warned Johnson in his resignation letter “not be tempted by the kind of coercive measures we have seen elsewhere.”

London Mayor Sadiq Khan Saturday declared a “major incident” due to a rapid spread of the omicron variant across the the city, giving him more powers to fight the virus and seek government support. With so many people now staying home, the country has entered what some call a “stealth lockdown” that’s left retail, hospitality and travel reeling.

Prime Minister Micheal Martin on Friday ordered bars and restaurants to close by 8pm and limited attendance at certain events.

The omicron variant is now dominant in Ireland, and daily case numbers have hit their highest level since January. Starting this week, Ireland will require bars, restaurants, cinemas and sport venues to shut down by 8 p.m.

The Dutch already made their move: the nation returned to a strict lockdown on Sunday. That means schools and non-essential shops are closed, and fewer visitors will be allowed in households. The steps come as the government said the rise of omicron will likely overburden its health care system in January. The new restrictions will remain in place until at least Jan. 14.

That’s a scenario Germany is trying to avoid, as its health care system continues to struggle with a virus wave that peaked in late November. Hospital demand isn’t expected to subside much for a month or more. The country joined Cyprus and France in imposing stricter rules for travelers from Britain, who’ll have to undergo a mandatory 14-day quarantine upon arrival, upending holiday plans. France temporarily banned entry for many Britons last week, and Cyprus will require visitors from the U.K. ages 12 or above, regardless of vaccination status, to self-isolate. Germany’s new government is also mulling a vaccine mandate.

As well as imposing a ban on U.K. arrivals, France is curbing outdoor revelry on New Year’s Eve to try to limit the spread and protect its hospitals. The government is also turning up the pressure on people to get vaccinated, and from January only immunized people will be able to get a “health pass” that gives access to bars, restaurants, medical facilities and cultural venues.

French Labor Minister Elisabeth Borne will meet with business and labor leaders Monday to discuss the possibility of requiring health passes at work. Unions say such a move would effectively make vaccines mandatory in France.

Spain will convene an online emergency meeting on Wednesday to analyze the evolution of the pandemic and discuss adopting new measures. Some regions are already requiring proof of vaccination to enter restaurants and bars, but have refrained from more aggressive steps that could put a drag on an economy heavily reliant on services and tourism.

On Thursday, Italy’s government will also hold an emergency meeting and may look at options such as requiring masks outdoors, shortening the validity of vaccine certificates, and possibly requiring inoculated people as well as the unvaccinated to take COVID tests to access large events, according to people familiar with the matter.

A vaccine laggard, with less than 68% fully inoculated, Switzerland will exclude the unvaccinated from large parts of public life, such as restaurants, museums and gyms. The Swiss government also reintroduced a work-from-home requirement. The measures are in place until Jan. 24.

Austria was in lockdown when omicron hit, after a low vaccine rate fed a surge in delta cases that swamped the country’s health care system. The general lockdown was lifted earlier this month in time for the holidays. The unvaccinated have also been offered a respite, but after the New Year will once again only be allowed to leave their homes to go to work, do essential shopping, or exercise. The country also mandated vaccines from February. Austria’s daily cases have fallen more than 75% from their peak, and vaccinations have advanced steadily in the past month.

Israel’s cabinet approved banning travel with the U.S., Canada and eight other countries to try to mitigate the local spread of the omicron variant. Once a parliamentary committee signs off on the measures, the new restrictions will go into effect at midnight Tuesday.

The new strain is in the community transmission phase and has spurred a fifth wave of the pandemic in Israel, Prime Minister Naftali Bennett told the cabinet on Sunday. Other countries on Israel’s banned list include Italy, Belgium, Germany, Hungary, Morocco, Portugal, Switzerland and Turkey.

The Polish government has ordered schools to switch to remote learning through Jan. 9, and tightened capacity limits in public spaces such as restaurants, hotels and cinemas. Limits were reduced to 30% of capacity from 50% previously. The government closed discos and nightclubs as of Dec. 15. The health ministry is also planning to make vaccines mandatory for medical staff, uniformed services and teachers as of March 1. Deaths from COVID in the nation of 38 million people have been running at more than 500 a day.

An effective shutdown of the U.S. is probably unnecessary as COVID surges again, though hospitals will be tested by the expected rush of omicron cases, according to Anthony Fauci, who leads the National Institute of Allergy and Infectious Diseases.

With colder weather and holiday travel and gatherings, stresses on the medical system will be particularly acute in regions of the country with low levels of vaccination, Fauci told CNN’s “State of the Union.” He urged the public to get vaccines and boosters, noting that about 50 million people are eligible to get shots and haven’t.

In his address to the people on Tuesday, President Biden will announce new steps to help communities in need of assistance, while also issuing a stark warning of what the winter will look like for Americans that choose to remain unvaccinated, according to a White House official.

In New York City, Mayor Bill de Blasio called on the federal government to step up supplies of tests and treatments to the city amid a spike in infections. New York state broke a record for new infections for a third straight day.