by
Rachel Pannett and Miriam Berger
• The Washington Post • December 19, 2021 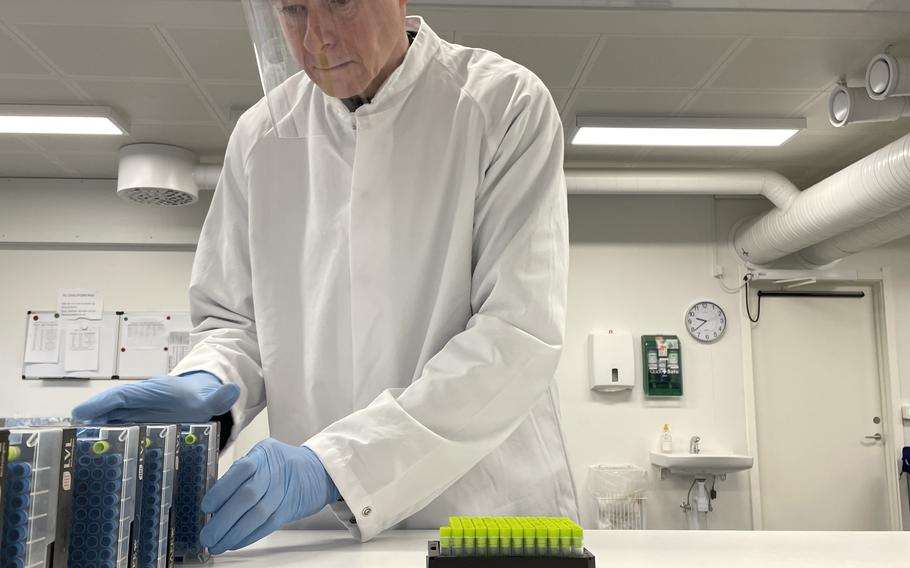 New swabs arrive at State Serum Institute lab 21 times per day, from morning until 2 a.m. Within 48 hours of every test, Denmark knows whether a positive is attributable to omicron. (Chico Harlan/The Washington Post)

The Netherlands imposed a snap lockdown starting Sunday. Officials in Ireland imposed a nightly curfew from Monday. France banned New Year's Eve fireworks. Other European countries, including France and Germany, imposed new travel restrictions. Israel has urged people to work from home when possible and is weighing tightened travel restrictions to and from the United States, among other countries.

But in Australia — once dubbed the "Hermit Kingdom" for the way it sealed its international borders against the virus — officials in the country's most populous areas have loosened nearly all restrictions in recent days, despite case numbers soaring to fresh records.

New Zealand, too, has been loosening restrictions. The country's prime minister, Jacinda Ardern, is set to celebrate her pandemic-delayed wedding next month with dozens of guests and a performance by the singer Lorde, the New Zealand Herald reported.

While some nations are reimposing coronavirus restrictions including lockdowns in the face of the highly transmissible omicron variant, others are loosening up — even as case numbers spike.

In Australia, which reopened its mostly shut border in November, experts have questioned the merits of ending preventive measures such as mask-wearing indoors just as case numbers are touching local records. The last time restrictions were eased, the borders were closed to international arrivals and the virus had been all but eliminated in the community.

Even as some community restrictions lift in New Zealand, its border remains mostly closed, and international arrivals spend two weeks in hotel quarantine, which has kept the number of confirmed cases of the omicron variant to about a dozen, all detected before they could spread.

Health officials in Australia's New South Wales state, home to Sydney, lifted a raft of restrictions Dec. 15, including those around mask-wearing and proof of vaccination. Until then, unvaccinated people had effectively been in lockdown — unable to dine out, go to the gym or shop for anything other than essential goods.

That's as at least 97 coronavirus cases were linked to a Taylor Swift-themed dance party on Dec. 10 in Sydney, and some 600 people are in isolation as close contacts. More than 200 people contracted the virus following a recent nightclub outbreak in Newcastle.

Disease modelers say Australia's most populous state could record as many as 25,000 cases a day by the end of January — the same number recorded across Britain on Friday, where surging case numbers have seen London's mayor declare a "major incident" to help the city's hospitals cope. Australian officials have cited the data from researchers as a reason for people to exercise self-restraint, limiting their activities over the holiday season.

The president of the Australian Medical Association, Omar Khorshid, said Saturday that loosening restrictions such as mask-wearing while cases are rising sharply is "bizarre timing." More than 10,000 people have contracted the virus in New South Wales in the past five days.

"Hospitalizations lag behind infections quite significantly by a week or even two weeks; it's too late once we actually see a sharp rise in hospitalizations," Khorshid said.

Government officials have argued that vaccinations and boosters are the way to keep cases down. About 77 percent of Australians are fully vaccinated, according to Johns Hopkins University data.

"We're ready for this. We planned to live with the virus, we didn't plan to remain shut in," Australian Prime Minister Scott Morrison told reporters on Saturday.

The World Health Organization issued a grim weekend prediction that with cases rising so rapidly, hospitals in many places could "become quickly overwhelmed." The omicron variant has been reported in 89 countries, and the number of cases is doubling in 1½ to three days in areas with community transmission, the organization said Saturday.

The United States has responded by introducing travel bans for a number of African countries, and additional pre-departure testing requirements for arrivals into the country, as well as encouraging Americans to get booster shots.

Across Europe, where omicron is poised to become the dominant variant, nations are moving to reimpose tougher measures to stem infections as the new variant spreads at lightning speed across the continent.

In the Netherlands, Prime Minister Mark Rutte said that all nonessential stores, bars and restaurants will be closed until Jan. 14, starting Sunday. Schools and universities will shut until Jan. 9.

France announced Thursday that it was banning tourists from Britain, while Germany said on Saturday that it will impose quarantine on all travelers from Britain starting at midnight on Monday and require a negative coronavirus test for entry into the country.

Britain has reimposed mask requirements indoors and ordered people to show proof of vaccination or a recent negative coronavirus test when going to nightclubs and large events. Prime Minister Boris Johnson has talked about a "tidal wave" of new cases.

Officials are reportedly preparing draft rules that, if introduced, would ban indoor gatherings in England for two weeks after Christmas, with pubs and restaurants limited to outdoor table service, according to The Times newspaper.

Ireland's Department of Health said on Sunday that omicron had become the country's dominant variant in just two weeks.

Israel has renewed a temporary ban on foreign visitors and is considering adding the United States, among other countries, to its "red list" of high-risk places. Israeli citizens and residents returning from countries on the red list must first enter a government-run quarantine hotel to await a negative PCR test and then undergo a seven-day home quarantine. Official permission is also required to travel to red-listed countries.

Scientists say many questions about omicron remain unanswered, including how effective existing vaccines are against it and whether it causes more or less severe illness. Their concern is that even in places like Australia or Denmark, a highly vaccinated, wealthy northern European country, the virus is about to sprint out of control.

"The right thing to do right now is try and flatten that curve a little bit, because we don't know what proportion of people who get omicron are going to end up in hospital," said the Australian Medical Association's Khorshid. "It seems more mild, but if you end up with tens of thousands of people every day getting infected ... even if a small proportion end up in hospital, that could still overwhelm the system."