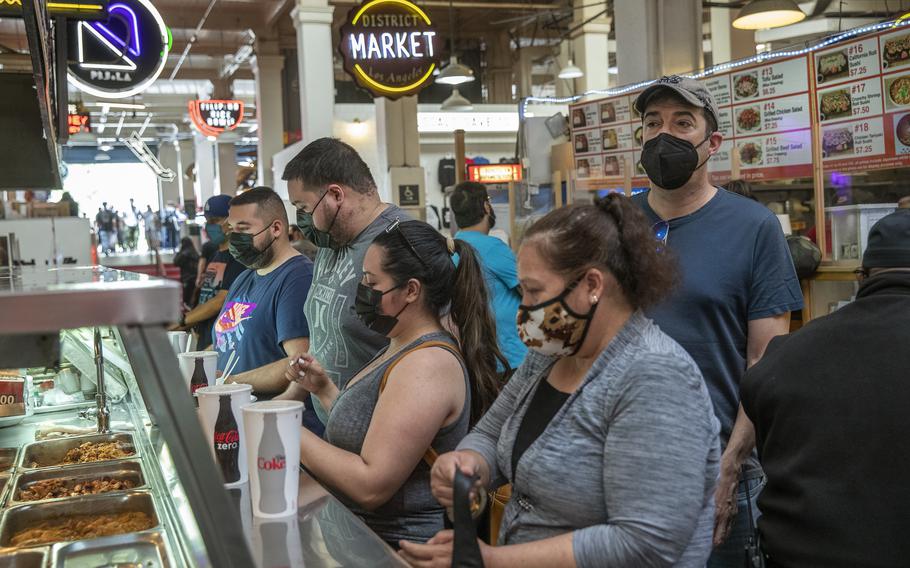 Exactly one year after the United States kicked off its vaccination campaign against COVID-19, cases are surging once again as the country cobbles together a response.

The big unknown this time is omicron, the variant that was first detected last month in South Africa and is spreading around the world so rapidly that experts believe it could overtake delta as the dominant strain this winter.

Federal officials said that omicron accounts for just 3% of new cases nationwide, though that figure is 13% in New York and New Jersey. Those numbers are certain to grow.

As a fatigued public grows increasingly resistant to measures aimed at controlling the virus, schools, offices, cities and families are making their own risk calculations in the busiest travel season of the year.

This week, Princeton, Cornell and New York universities have canceled events or moved final exams from the classroom to online.

“I feel safe, but there are concerns all around,” said Anthony Cruz, a junior education studies major at New York University who will now take his finals online.

He said some students went home early for winter break. Pop-up COVID-19 testing sites have appeared in Washington Square Park by the university.

New infections in the city are at their highest level since the spring. Broadway shows have had little choice but to cancel performances, because cast members are getting sick.

In the Midwest, overwhelmed hospitals are making desperate pleas for residents to wear masks and get vaccinated.

“We’re heartbroken. We’re overwhelmed,” said an advertisement that the Mayo Clinic placed in Minnesota newspapers. “Our emergency departments are overfilled and we have patients in every bed. Now an ominous question looms: Will you be able to get care from your local community hospital without delay? Today, that is uncertain.”

In Michigan, infections and hospital admissions are close to the highest they’ve been during the pandemic.

That hasn’t changed Kevin Barthold’s plans to enjoy the holidays with family and friends. The 59-year-old who does installations and repairs for a telecommunications company worked throughout the pandemic and got a religious exemption when his employer mandated vaccination.

“This is the new flu,” said Barthold, who lives in the suburbs of Detroit. “People need to get used to it.”

Experts said this is not the time for the country to become less cautious, pointing to the rise of delta over the summer to illustrate the potential cost.

But they also acknowledged that Americans have little appetite for a new round of lockdowns, closures and curfews.

“When you’ve been told so many times to worry, and to change your behavior, you have a certain numbness on the part of the public,” said Lawrence Gostin, a public health expert at Georgetown University’s law school. “You have a sense that this is just destiny, and that there’s nothing we can do about it.”

Experts are predicting that the omicron variant could become dominant in the United States as soon as January.

“Early data suggests that omicron is more transmissible than delta, with a doubling time of about two days,” Dr. Rochelle Walensky, director of the U.S. Centers for Disease Control and Prevention, said Thursday.

What’s less clear is whether omicron is more dangerous than other variants in terms of hospitalizations and deaths.

Gostin said that even if the variant is milder, the sheer number of cases could overwhelm hospitals and lead to more deaths than delta.

“That’s the law of numbers, even with a smaller percentage progressing to serious illness,” he said. “We might be headed back to the old days of flattening the curve.”

The top White House pandemic adviser, Dr. Anthony Fauci, on Thursday pleaded with Americans to get vaccinated. Studies have shown that vaccination followed by a booster shot provides the greatest protection against the new variant.

While 61% of Americans are fully vaccinated, just 27% have gotten boosters.

“When you look at the pace of the infections now, things will get worse as we go into the depth of the winter,” Fauci said. “And with omicron breathing down our back, things could get really bad, particularly for the unvaccinated.”

Still, Thomas Denny, chief operating officer of the Duke Human Vaccine Institute, said it would be a mistake to rely solely on vaccines.

He recommended masking, social distancing and proper ventilation at family gatherings, especially if elderly people are in attendance.

“This variant has thrown us a curveball at the worst possible time,” he said. “Every family has to decide what’s the norm for them — what they’re comfortable accepting.”