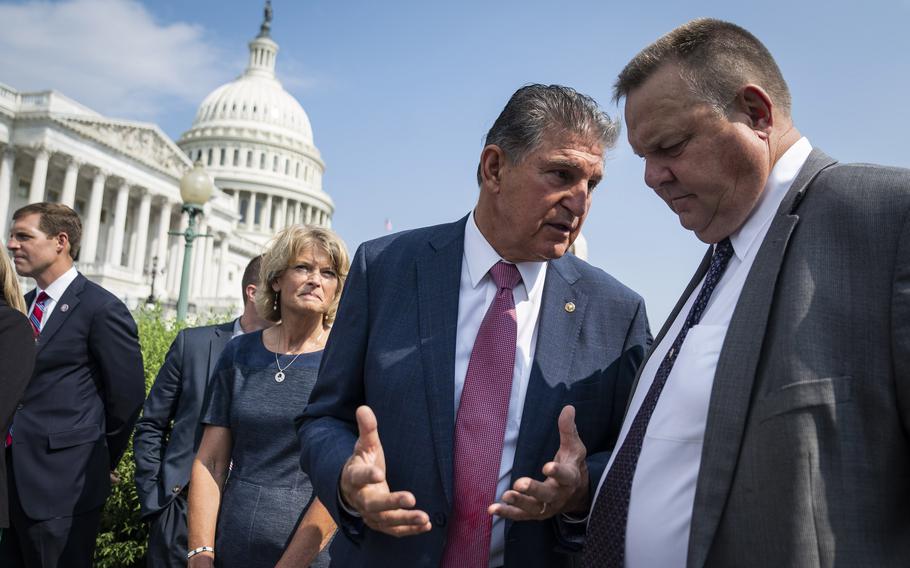 WASHINGTON — Congressional Republicans are planning to ratchet up their attempts to repeal President Joe Biden's vaccine and testing mandates, seeking to unwind policies that the White House and top public health officials see as critical to combating the coronavirus.

The emerging campaign mirrors in spirit the political and legal battles that GOP officials launched earlier in the pandemic, as they attacked business closures, mask mandates and other government-led measures to slow the contagion. Republicans on Capitol Hill contend that the vaccine requirements are unwarranted and unconstitutional and that they put Americans' jobs at risk.

The newest salvo is set to arrive as soon as Wednesday, less than a week after a group of Republicans in the Senate nearly shuttered Washington in protest of the president's policies. Led by Sen. Mike Braun, R-Ind., the effort specifically targets the Biden administration's rules that order private businesses to require vaccination or implement comprehensive coronavirus testing for their workers.

Braun's legislative push hinges on a congressional process to review, and potentially revoke, federal agency regulations. It is expected to secure more than the 51 votes necessary to prevail since the GOP recently gained the support of some Democrats, including Sen. Joe Manchin of West Virginia.

The repeal would probably face an uphill battle in the House, and it would see certain veto if it ever reached Biden's desk, but some Republicans have signaled that they plan to intensify their efforts in the days ahead anyway. Another group of GOP lawmakers, led by Sen. Roger Marshall of Kansas, is already preparing a second measure that aims to scrap Biden's vaccine mandate for medical professionals, the lawmaker revealed this week to The Washington Post.

"We have to be able to communicate, to walk and chew gum, and explain to people both pieces of the puzzle," said Marshall, adding that he supports vaccination but also believes the government should not require it in the private sector.

Even so, GOP lawmakers insist they are not taking an anti-vaccine stance in mounting their political campaign. Their efforts came on a day when one of the vaccine's manufacturers, Pfizer and BioNTech, found that boosters may be critical to halting the spread of the new omicron variant of the pathogen.

The political spat began earlier this fall when Biden issued a number of directives to promote vaccination nationwide, aiming his executive actions at military service members, federal workers, health professionals and private businesses. While announcing one of the policies in September, the president fretted that "a distinct minority of Americans, supported by a distinct minority of elected officials, are keeping us from turning the corner" on the pandemic. 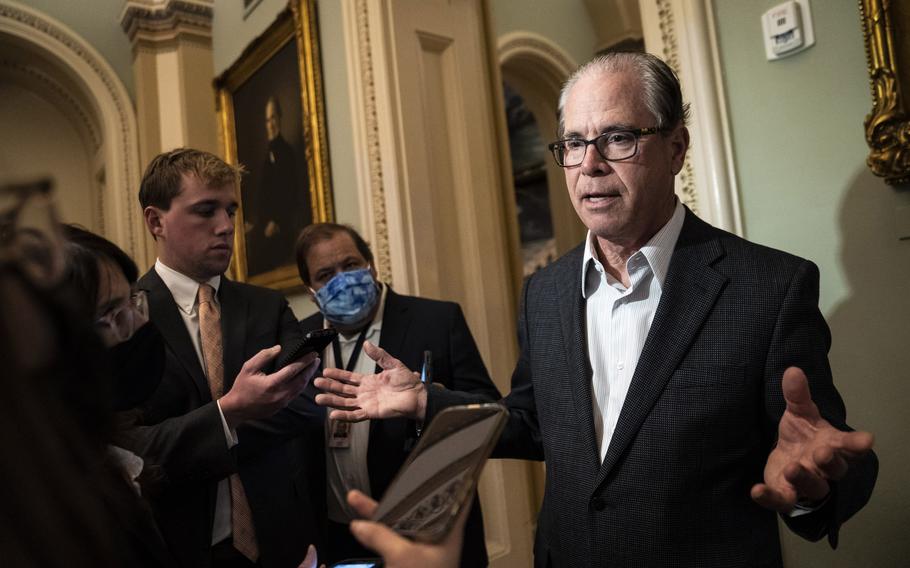 Democrats largely hailed Biden's approach, and public health experts and economists predicted the administration's efforts could produce a meaningful boost in the ranks of the vaccinated. One analysis from Goldman Sachs in September estimated that the policy targeting the private sector would apply to 25 million Americans, prompting just under half to get vaccinated by March, a finding economists derived from studying similar efforts in France.

The firm added that there could be some short-term disruption to employment if Americans leave their jobs, but it said the long-term prospects are positive given the benefits of immunity — and the fact that Biden also allowed for testing as an alternative. The prediction tracked closely with developments in the labor market, in which workers at major airlines and police departments threatened to quit in response to vaccine rules, only to get immunized anyway.

Yet the White House still faced a groundswell of opposition, led by Republicans nationwide, who feared the requirements would result in millions of Americans leaving their jobs. With the backing of major retailers and business lobbyists, a group of GOP state attorneys general sued in November, urging a federal court to halt some of the administration's vaccine requirements. A judge in New Orleans ultimately sided with them, halting the policy's implementation in a blow to the Biden administration's plans.

Other legal challenges and appeals are underway. In the meantime, the campaign has migrated in recent weeks to Capitol Hill, where Republicans have unleashed a flurry of efforts to try to defund or otherwise weaken Biden's vaccine policies.

In September, Marshall and other GOP lawmakers tried to revoke funding for a federal safety agency tasked with enforcing the rules targeting the private sector. But the effort, launched as part of a fight at the time to fund the government, failed soon afterward.

Those same GOP lawmakers then reprised their effort — and expanded it to cover all of Biden's vaccine mandates — in the days before that September funding agreement expired last week. The spat, which resulted in another defeat, brought the U.S. government to the brink of a shutdown, a disruption that Democrats blasted as detrimental to the country's pandemic response.

Republicans then pushed as part of the congressional debate over a roughly $778 billion defense bill to ensure military service members who decline the vaccine can receive an honorable or general discharge, permitting them to obtain benefits. And GOP lawmakers plan this week to invoke the Congressional Review Act to force the Senate to vote on a potential repeal of the vaccine rules targeting businesses. The mechanism allows Braun, its chief sponsor, to bypass the objections of Democrats in the tightly controlled chamber.

The Indiana Republican said he embarked on the effort out of a belief that Americans should not have to choose between getting vaccinated, submitting to testing or possibly losing their jobs.

Braun's effort is likely to pass the Senate since Manchin in recent days signed on to the resolution. The moderate Democrat has expressed opposition to vaccine policies targeting private employers, even though he has supported similar rules governing federal workers and members of the military. Another centrist lawmaker, Sen. Jon Tester, D-Mont., said he still needs to review the measure but intends to support it.

The GOP push drew a sharp rebuke from Senate Majority Leader Chuck Schumer, D-N.Y., who told reporters at a news conference Tuesday that lawmakers instead should "double and triple down in encouraging all eligible Americans to get vaccinated and boosted as soon as possible," particularly given the rise of the new omicron variant of the coronavirus.

"This week, Republicans want to take us in the opposite direction, with an anti-science, anti-vaccine vote," Schumer said, arguing that if they prevail, "COVID will linger longer."

Yet the proposal faces an uncertain future in the House, where a similar effort by Rep. Frederick Keller, R-Pa., has 206 Republican backers. That is not enough to force it to the chamber floor, though Keller said he is "hopeful" other Democrats will eventually join them.

In a sign of the politics animating lawmakers, Braun said he thought Manchin's backing might provoke support, particularly among "Democrats in swing-state districts" facing reelection in 2022.

In the meantime, Marshall said he continues to rally support for his effort to overturn the vaccine mandate targeting health professionals, citing his belief that such policies more broadly could leave millions of Americans out of jobs. A doctor by training, Marshall said fellow industry workers had "blown up" his phone in opposition — reflecting, he said, a belief among some that the White House has failed to acknowledge "natural immunity" as a potential defense.

Marshall said he could not predict how far or aggressively Republicans plan to push the issue, a critical question since lawmakers must adopt another government funding measure by Feb. 18. For now, though, he said Republicans feel "we need to keep fighting."

"What I hear from folks back home," he said, "is that they want to see the Republicans fight and stick together."