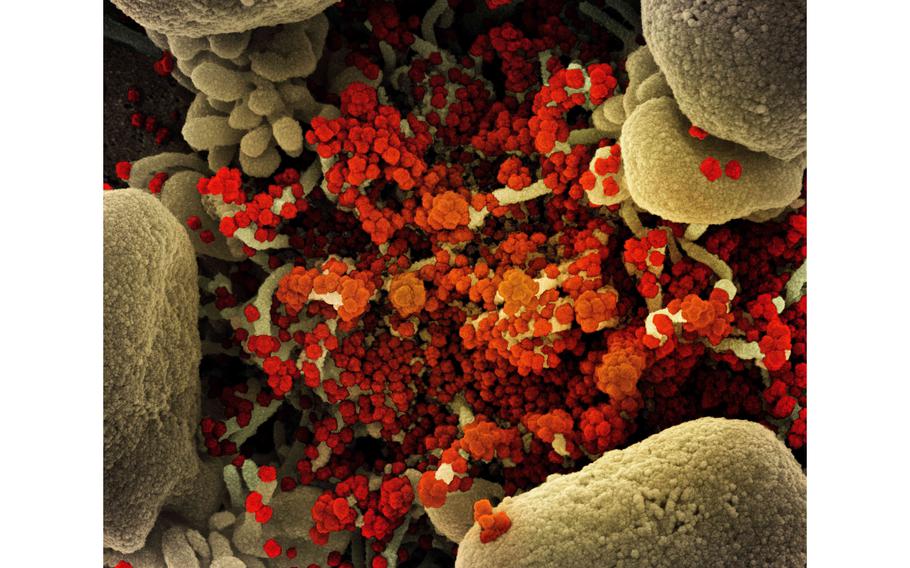 This colorized scanning electron micrograph of a cell heavily infected with SARS-CoV-2 virus particles (orange/red) was captured at the NIAID Integrated Research Facility in 2020. (NIAID via ZUMA Wire/TNS)

(Tribune News Service) — As fears of another global surge of COVID-19 cases send jitters through global markets, spur a new round of travel bans and cause Americans to rethink their holiday plans, scientists studying the omicron variant are getting the first hints of what's in store for the months to come.

The new variant's mutations suggest that it is likely to evade the protections of vaccines to at least some extent, but that it is unlikely to cause more severe illness than previous versions of the coronavirus.

These early hypotheses appear in line with real-world observations from places like South Africa, where infections have included the vaccinated and previously ill but appear so far largely mild. That data, however, is thus far extremely limited, so much current evidence has come from computer modeling and comparing omicron's physical structure to past variants.

A lot remains a mystery about omicron, which has more than twice the number of mutations as the delta variant, with the bulk found in the spike, the crown-like protein on the surface of the virus that vaccines train our bodies to attack. The appearance of such a highly mutated virus nearly two years into the pandemic caught the scientific community by surprise, as many had hypothesized that the ultra-contagious delta variant might mark the last major wave, peaking and then eventually burning out, much like the 1918 influenza pandemic.

It will take scientists weeks of careful laboratory testing and study to untangle exactly what omicron's mutations mean, and definitively nail down details about how much more contagious it is and what the implications are for those who get infected. But early observations have already allowed scientists to make some informed guesses about what's to come.

The location of omicron's mutations suggest two things. The first is that the virus is likely to evade vaccines to some extent. Some of the spike mutations are in the same locations seen in other variants that spread quickly. In past variants those mutations have led to what's known as antibody escape, in which the virus is able to evade the attack of antibodies generated by vaccines or a previous COVID-19 infection.

The second insight is that it appears likely omicron won't be impervious to the body's second line of defense, T-cells. They work hand-in-hand with antibodies to ward off infection and the development of disease. If a virus manages to escape the attacks of antibodies, T-cells then get to work killing infected cells.

"Many of the mutations occur in the hotspots on the spike protein, which we know are important for antibodies to bind," said Wendy Burgers, an immunologist at the University of Cape Town. "What we predict is that a lot of the T-cell response will still be active against omicron."

Her lab is awaiting samples from omicron-infected patients and spike-protein based on omicron to begin experiments to help confirm this suspicion. But early computer analysis has backed up the theory.

Antibodies have narrow targets of attack on the spike protein, aiming for just two specific regions known as the receptor binding domain and the N-terminal domain. That means that a handful of mutations in those regions can significantly impact the ability of antibodies to attack.

T-cells, on the other hand, target the entire spike. A handful of changes are less likely to impact their effectiveness.

"What we need to confirm with our lab experiments is how much is the T-cell response affected?" she said.

While some of omicron's dozens of mutations have been seen before in previous variants, many are completely novel. That means more time and data will be necessary to fully understand the full impact of omicron with any certainty.

At Rockefeller University in New York, Theodora Hatziioannou's lab has spent the past year experimenting with a non-dangerous, synthetic version of the virus to see what might happen were there significant numbers of mutations to the COVID-19 spike protein, many in the same locations as omicron.

"We can be quite confident that this new spike is going to be rather resistant to neutralization by antibodies," she said. "I am hoping that this omicron spike will not escape every single response of our immune system and that the vaccines will still afford some protection from severe disease."

In the long term, what these mutations highlight is that predictions about the pandemic are hard to make.

Charles Chiu, a microbiologist at University of California, San Francisco whose lab sequenced the first-known U.S. case of omicron, said that he was in the camp of scientists that suspected the delta variant was the beginning of the end of the pandemic.

"I was surprised by omicron," he said. "This is a virus that has constantly surprised us."

Even if omicron doesn't result in more severe infections for most people, he said, an uptick in cases would result in more hospitalizations and deaths simply because of the number of infections. And as long as there are large numbers of unvaccinated people around the world, the virus will keep spreading and mutating.

Omicron also presents further proof that SARS-CoV-2 is highly adaptable, and may be difficult to ever eradicate completely. Public-health policy may need to shift away from the goal of trying to eliminate the virus from circulation through vaccination to instead focus on preventing severe disease, according to Chiu.

"It's very possible this virus is here to stay," he said.