Lockdowns and fines: Europe cracks down on the unvaccinated 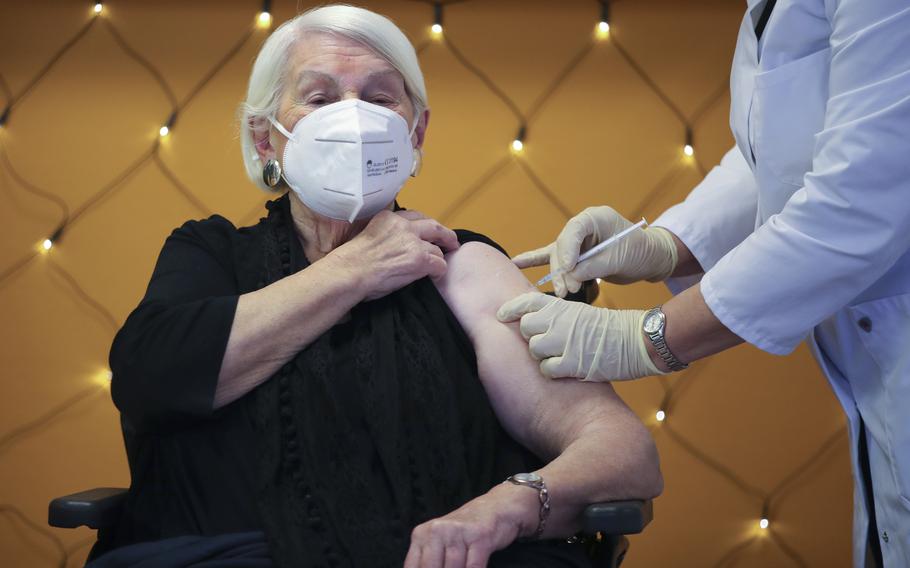 ZURICH (Tribune News Service) — Even before the shock emergence of the omicron variant, Europe's coronavirus battle was on shaky ground.

Cases surging at a record pace, hospitalizations and deaths on the rise — it's setting up to be a nightmare winter for the continent yet again. The omicron mutation has added an extra layer of uncertainty, but the continent's immediate problem is grappling with the wave of infections that's already put countries back into lockdown.

Germany's government this week became the latest to ramp up its response, putting stringent restrictions on the unvaccinated, and may even make shots compulsory. Austria has already proposed mandatory vaccinations, while other countries plan to fine those who refuse.

The drastic steps are a response to a drastic situation. In Austria, seven-day cases topped 1,100 per 100,000 people at one point. That's eight times the average over the preceding three months. Since the lockdown, the number has dropped, though hospital admissions, which lag, are still near a peak. Figures have been less dramatic elsewhere, though the trend has been up in many countries, including Germany, Italy, Netherlands and Greece.

The new targeted measures reflect a view that while there are multiple factors behind the latest wave of COVID-19 infections — from cold weather to people letting their guard down — one major element is vaccines. European Union countries may have managed to put about 640 million shots into arms, but even with that huge effort, about 150 million people still aren't fully vaccinated.

Here's what governments are doing to try and change that.

Europe's largest economy on Thursday joined the countries making life tougher for the unvaccinated, announcing that only people who are inoculated or recovered will be allowed into restaurants, theaters and non-essential stores. A vaccine mandate, which is backed by both Chancellor Angela Merkel and her incoming successor Olaf Scholz, will go to a vote in parliament in the coming weeks.

The government is making vaccines mandatory for all Greeks above 60 years of age. From next month, refuseniks will pay a 100-euro ($113) fine every month they don't get a shot, with the funds going to hospital services. In Greece, only 60,000 among the 580,000 unvaccinated people over 60 years old received the vaccine in November.

Swiss authorities on Friday urged people to work from home where possible, after failing to win backing for a mandatory home-office order, even for the unvaccinated. The government resisted imposing tough new rules, but said businesses such as bars and nightclubs have the choice to limit access only to those fully vaccinated or who've recovered from COVID-19. The country is also putting restrictions on unvaccinated people entering from certain countries.

Belgium also announced new restrictions on Friday, though there were no measures specifically targeting the unvaccinated. Primary schools will close early for the Christmas break, and secondary schools must limit in-class teaching. Indoor events with more than 200 people are banned, and a mask mandate extended to anyone over the age of six.

The country with one of the lowest inoculation rates in western Europe will remain in lockdown until mid-December. The government plans to then lift restrictions for the vaccinated or people recently recovered from the virus. A lockdown for the unvaccinated will probably persist, though they can still go to work with a negative test. Officials are also working on plans to impose mandatory vaccinations from February, with fines reaching as high as 7,200 euros ($8,151).

Spain has effectively banned travelers from the U.K. who aren't fully vaccinated. From Dec. 1, it will only accept proof of vaccination for adult entry. U.K. government advice also says that a certificate of recovery from Covid isn't accepted either by Spanish authorities.

Elsewhere in the world

The crackdown on the unvaccinated isn't confined to Europe, and it may become more widespread as governments, pushing to get past the pandemic, deal with the omicron threat. According to a South African study, the risk of reinfection from the news variant is three times higher than for any previous strain.

The country is readying a mandatory vaccine policy and is set to implement it early next year, according to a senior labor union official. Broad agreement has been reached in the National Economic Development and Labor Council, a negotiating forum, and the Congress of South African Trade Unions, which initially opposed forcing people to get inoculated, has now joined business groups in backing the move. Some local firms have already made it compulsory for their workers and seen the uptake of shots surge as a result.

President Joe Biden's administration issued an emergency rule forcing large private employers to require vaccination or regular testing. The Labor Department said the mandate will apply to companies with 100 or more employees and set a Jan. 4 deadline. Failure to comply could trigger fines of as much as $136,000.

About 5% of unvaccinated workers left their jobs when their employer imposed a vaccine mandate, according to an October survey from the Kaiser Family Foundation.

In Singapore, those who choose not to get their jabs will now have to pay for their own medical bills if they get Covid. Patients who receive therapeutics and stay in intensive care units may have to pay about S$25,000 ($18,460), according to a median estimate released by the health ministry.