‘We are scared every day’: Florida schools troubled amid assaults on teachers 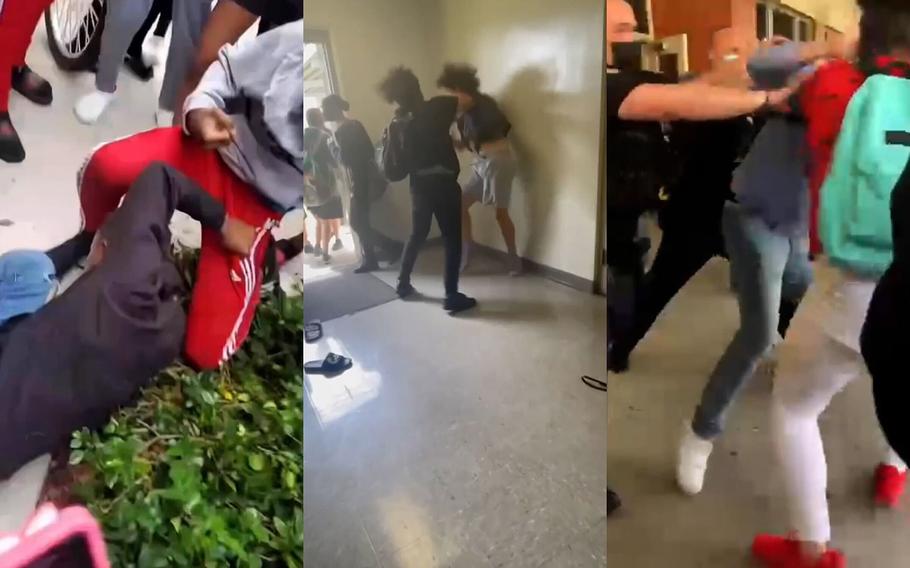 FORT LAUDERDALE, Fla. (Tribune News Service) — When students returned to school this year, they brought with them pent up energy from a tough time in near isolation during the pandemic.

Now, reports of fights, criminal batteries and fear of violence are becoming an unwelcome part of students' full return to in-person education.

While the violence isn't happening at every school, many are seeing the problems erupt on more South Florida campuses than in the past. There are reports of teachers, security staff and administrators being knocked to the ground. Footage of students fighting is often shared on TikTok and other social media.

—At Coral Springs High, a video went viral on social media that showed a male student beating up a female student as a staff member tried to intervene. Their horrified classmates screamed from their seats with each blow to the student, and as her aggressor slammed her to the floor.

—At Monarch High in Coconut Creek, at least 10 incidents of battery have been reported since mid-September, with several students arrested.

—In Palm Beach County, there have been 68 reported incidents of battery since mid-October, with 29 of those cases resulting in an arrest, according to school police.

—Broward has reported 712 fights and 223 physical attacks from the start of school through late October.

—At Marjory Stoneman Douglas High in Parkland, the site of the 2018 mass shooting, a teacher reported in early November being attacked by a freshman student near the end of the school day.

"We are legitimately scared every day to go to work because we don't know what's going to happen today," said a teacher at Coral Springs High, who declined to be named, citing fear of retaliation.

Adding to the problem is a shortage of guidance counselors, therapists and behavioral health specialists. Those who are there often have to fill in as substitutes or hall monitors due to shortages among other staff.

"It definitely has been a concern," said Alexandria Ayala, a Palm Beach County School Board member. "I think that's to be expected after two years of unconventional learning, financial strain, family loss."

Teachers and administrators immediately noticed these students were in a different mental and emotional state than the one they'd left off in, she said. Now, more teachers are leaving out of concern for their own safety, said Anna Fusco, president of the Broward Teachers Union.

"They didn't sign up to be abused," Fusco said. "Even kids in our youngest grades, pre-K and kindergarten, are coming in angry and frustrated. We just had an incident where a 10-year-old cracked a teacher's head with a snow globe."

The Broward County School District acknowledged that the violence is concerning, and said students were under more stress due to the pandemic.

"Due to the lower number of opportunities for social interaction during the pandemic, many communication skills and coping strategies that are normally used on a daily basis have not been exercised," the office of Chief Communications Officer wrote in a statement.

"Since COVID-19, more students and families are seeking mental health resources available through our schools — including therapists and counselors — to help process the experience," the statement said. "Mental health professionals at Broward County Public Schools are trained to recognize the signs of mental distress in children, how to approach them effectively and can connect them with mental health resources."

The district also hired staff and implemented technology to monitor social media. The district has seen a recent increase in the number of tips submitted to the FortifyFL and SaferWatch apps, the statement said.

Many students had grown used to learning from their bedrooms in their pajamas, never really encountering their fellow classmates. At least not in an academic environment.

When they returned, all the traditional social pressures of school — bullying, cliques, ever-present threats of violence, and now heated mask debates — that they had gone so long without came rushing back, too.

On top of that, their academics had taken a hit and the pressure to get back on track is immense. At home, they might be experiencing increased financial strain or grief from the loss of a family member.

Throw that all together and classrooms became pressure cookers. Each week, fights broke out.

Students who felt desperate for validation clung to new crews that only took them down the wrong path and got them into trouble.

"They were more rambunctious," Ayala said. "They had forgotten how to interact with each other. They're all so fired up, and have their own circles, conversations taking place on social media, which is another big part of this. There was a sense of an unsteady social-emotional well-being of students."

Monarch High, a school that hasn't historically had a reputation for violence, reported at least 10 battery cases this year and numerous fights, according to Coconut Creek police reports, students and staff. Ailin Le, a junior at the school, said she doesn't remember any fights before the pandemic, but said she has seen many this year.

"When it happens during lunch, kids don't feel safe to go to lunch and relax," Le said. "I feel like students being home, they didn't have any motivation. They may also not know the risk of getting into a fight."

Some fights have led to injuries. A report describes an Oct. 14 incident at Monarch where a student rushed and tacked another student to the ground "and started repeatedly striking him in around the facial area." The student who was attacked also said that once he stood up, the other student kicked him in the face.

"He advised he suffered abrasions by his right eye, had bruises in his back and arms and had bloodshot eyes due to the fight," the report said.

Parents scared by the fights and especially by the threats have pulled their children out of schools in Broward and Palm Beach counties, some permanently and others just for the day to avoid the threats.

Either way, it's a disruption to learning, Ayala says. For the students who make threats or get into fights, these split-second decisions can disrupt their future, she said.

"Within our policies, we have expectations of conduct. There have to be consequences for this behavior, especially if it endangered another student in any way," she said. "It's difficult to be considering expulsions over things that didn't need to happen."

Administrators are encouraging students to seek help from behavioral specialists in schools, and they're encouraging parents to talk to their children about what they're going through before it grows into a bigger problem, Ayala said.

The situation is more difficult to address because of short-staffed schools and police departments. And because students are privy to the rhetoric around masks at school board meetings, they're under the wrong impression that it's OK to throw a fit over whatever issue they're having.

"Them seeing that behavior doesn't calm the temperatures in schools," Ayala said. "They're learning if adults can do this, I can do this. I don't think anyone is happy we're here right now as a society."

Lisa Sipes, whose daughter went to Northeast High School in Oakland Park, said she had to pull her daughter out of school to protect her from harassment she was facing from her peers. She plans to have her complete high school by taking the GED, she said.

"I just feel so hopeless at this point," Sipes said. "I don't want to make my kid drop out of school, but she was like, 'I can't live like this.'"