AMARILLO, Texas (Tribune News Service) — About 15 demonstrators gathered outside of the Thomas E. Creek Veteran Affairs Medical Center to protest the recent federal COVID-19 vaccine mandate. They stood in the median across from the facility with various signs denouncing vaccine requirements. Some people who drove by in their cars showed support by beeping their horns.

On Nov. 4, the Biden Administration announced details of a federal mandate, requiring specific employees to be vaccinated for the COVID-19 virus.

Those required to be vaccinated under the current guidelines include about two-thirds of the available U.S. workforce:

Federal employees of the executive branch, including members of the military Employees of companies with government contracts Health care workers at facilities that run Medicare and Medicaid programs Non-remote workers at companies with 100 or more employees, Postal Service workers and public employees in the 28 states and territories that enforce Occupational Safety and Health Administration rules.

Ryan Brightbill, organizer of the event and founder of Panhandle Texans for Medical Choice, stated that his group held the event outside of the VA Medical Center to bring attention to the mandate of the vaccine for federal employees.

"Our group is advocating to stop the vaccine mandates," Brightbill said. "We are not anti-vaxxers. We do not agree with the mandates that threaten people's livelihoods over an experimental vaccine."

"Federal employees have very little to no protection at all against the mandates," he said.

Brightbill said he is against any mandates and that medical decisions should be made between a patient and their doctor, and not in Washington, D.C. 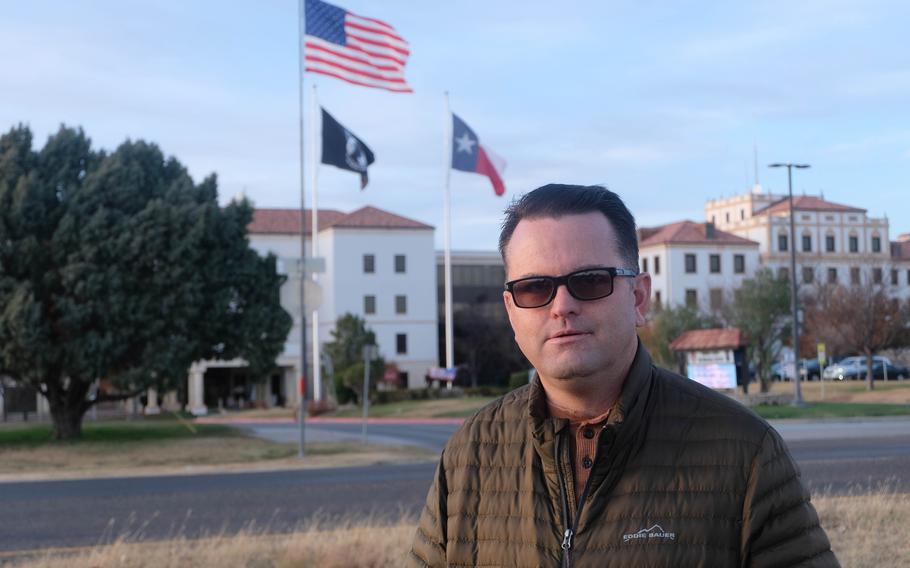 When asked about whether that applies to all medical decisions, Brightbill stated that decisions like abortion do not give an unformed fetus a medical choice.

He stressed the relative newness of the vaccine and his opinion that not enough research has been done on the vaccine for a mandate of this level to be imposed. He also stated that the number of reactions that have been reported in the VAERS reporting system also makes this vaccine very concerning.

According to the Centers for Disease Control and Prevention website:

The VAERS reporting system is designed for anonymous reporting of possible vaccine reactions and adverse events. As an early warning system, VAERS cannot prove that a vaccine caused a problem. Specifically, a report to VAERS does not mean that a vaccine caused an adverse event. But VAERS can give CDC and FDA important information. If it looks as though a vaccine might be causing a problem, FDA and CDC will investigate further and act if needed. Anyone can submit a report to VAERS — health care professionals, vaccine manufacturers and the general public. VAERS welcomes all reports, regardless of seriousness and how likely the vaccine may have been to have caused the adverse event.

Ed Heath, who participated in the protest, stated that his opposition to the mandate was based on its implementation.

"I don't want to meet my maker with that on my conscience," Heath said.

When pressed about whether he uses other products that use fetal tissue in research, such as Tylenol, he stated that he would not use those products if he were aware of that. According to the CDC and manufacturers, the vaccine contains no fetal tissue but like many products, it is used in research.

Multiple products use these types of cells in research, including Pepsi, Nestle and Kraft products. Other vaccines that treat rabies, polio, chickenpox also have used these cells in their research and manufacturing. Other common household remedies such as Pepto Bismol, Claritin, and about 30 different commonly used products also use these cells for testing.

Rhiannon Burch attended the protest to support personal choice for employees. She felt that the government had no right to tell people what to do with their bodies

"I feel like the mandates violate our freedom of choice," Burch said.

Many protesters felt that even the military should not be forced to take a vaccine, citing the relative newness and amount of time researched as opposition to a mandate.

Brightbill said that his group would hold other protests to bring to light the plight of workers being forced to get the COVID-19 vaccine.

The Biden Administration has stuck firm to a deadline of Nov. 22 for federal employees to show proof of immunization or file for an exemption. Currently, the Jan. 4 deadline for nonfederal employees has been put on hold, pending legal arguments.