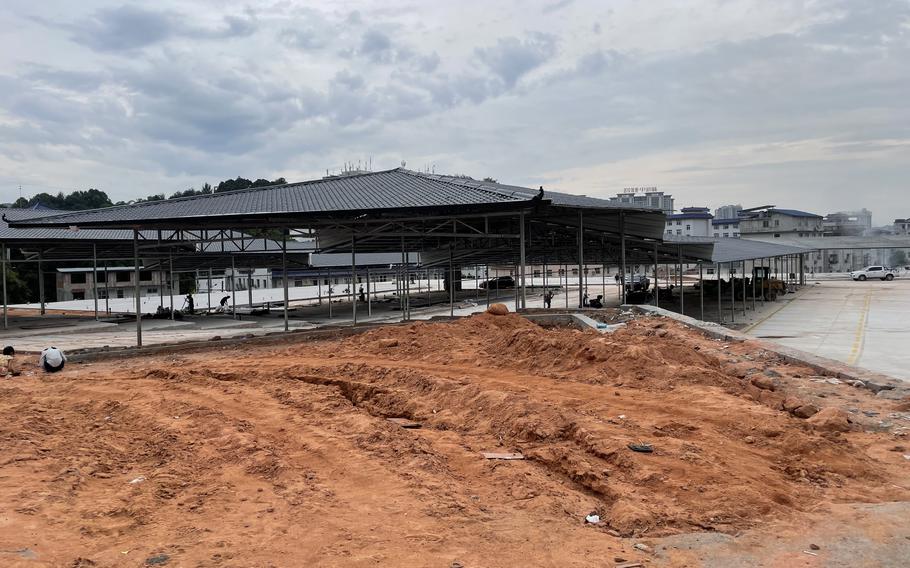 A new community market under construction in China’s Enshi city. At least six markets were permanently shut down in the city during the first three months of 2020 to comply with sanitation orders as the coronavirus emerged. (Michael Standaert/The Washington Post)

The location of early coronavirus infections in late 2019 in Wuhan, China, suggests the virus probably spread to humans from a market where wild and domestically farmed animals were sold and butchered, according to a peer-reviewed article published Thursday in the journal Science that is the latest salvo in the debate over how the pandemic began.

The article, by University of Arizona evolutionary virologist Michael Worobey — a specialist in the origins of viral epidemics — does not purport to answer all questions about the pandemic's origins, nor is it likely to quell speculation that the virus might have emerged somehow from risky laboratory research.

Worobey has been open to the theory of a lab leak. He was one of the 18 scientists who wrote a much-publicized letter to Science in May calling for an investigation of all possible sources of the virus, including a laboratory accident. But he now contends that the geographic pattern of early cases strongly supports the hypothesis that the virus came from an infected animal at the Huanan Seafood Market — an argument that will probably revive the broader debate about the virus's origins.

Worobey notes that more than half of the earliest documented illnesses from the virus were among people with a direct connection to the market, and he argues this was not merely the result of the early focus on the market as a potential source of the outbreak. He concludes that the first patient known to fall ill with the virus was a female seafood vendor at the market who became symptomatic on Dec. 11, 2019.

That contradicts a report earlier this year from investigators for the World Health Organization and China, who concluded that the first patient was a 41-year-old accountant with no connection to the market who became sick on Dec. 8. But Worobey said the accountant's medical records reveal he visited the dentist that day to deal with retained baby teeth that needed to be pulled, but did not show symptoms from the coronavirus until Dec. 16, and was hospitalized six days after that.

The stealthy nature of the virus, which can spread asymptomatically, makes it highly likely that the pathogen began to spread many weeks before any of the cases that were identified. But Worobey said the locations and occupations of the first known patients point to a market origin, with the virus radiating outward into the city of 11 million.

"It becomes almost impossible to explain that pattern if that epidemic didn't start there," Worobey said in an interview.

Geography has been central to theories about the origin of the virus. Wuhan is home to the Wuhan Institute of Virology, where researchers study and conduct experiments upon coronaviruses that circulate abundantly in bats in central and southern China. The institute has been a focus of those who argue that an accidental leak from one of its research labs is the most likely explanation for the spillover of the virus into humans.

The Huanan Seafood Market is many miles, and across the Yangtze River, from the virology institute. Few of the early documented cases were anywhere near the laboratory. A second laboratory studying coronaviruses at the Wuhan CDC, which oversaw the city's coronavirus response, relocated in late 2019 to a spot close to the market.

Worobey's article immediately drew skeptical responses from two prominent scientists who, like Worobey, have been deeply engaged in the debate over the most likely scenario for the start of the pandemic.

"It is based on fragmentary information and to a large degree, hearsay," David Relman, a professor of microbiology at Stanford University, said in an email after reading an embargoed copy. "In general, there is no way of verifying much of what he describes, and then concludes."

Jesse Bloom, a computational biologist at the Fred Hutchinson Cancer Research Center in Seattle, said the quality of the data from China on early coronavirus infections is too poor to support any conclusion.

"I don't feel like anything can be concluded with high or even really modest confidence about the exact origin of SARS-CoV-2 in Wuhan, simply because the underlying data are so limited," Bloom said. He contends that genetic evidence from early virus samples points to the market as a superspreader event, but not as the location of the first set of infections.

Bloom has been among those sounding alarms about what he feels is overly risky research conducted at the Wuhan Institute of Virology. That research has generated tremendous controversy, with some Republican lawmakers and conservative media figures focusing on funding for some of the experiments, funneled via a nonprofit group, EcoHealth Alliance, from the National Institute of Allergy and Infectious Diseases, which is led by President Joe Biden's chief pandemic medical adviser, Anthony Fauci.

"Mike's piece shows beyond a shadow of a doubt that in fact the Huanan market was the epicenter of the outbreak," said Robert Garry, a virologist at Tulane University and one of the most vocal proponents of the zoonosis hypothesis.

Benjamin Neuman, a virologist at Texas A&M University who was one of the coronavirus experts to give SARS-CoV-2 its name in early 2020, called the report "detailed and compelling, in a way that the most detailed conspiracy timelines have not been. ... When the evidence is laid out like this, the association with the market is strong long before anyone realized it — right from the start."

Worobey and critics Relman and Bloom have one thing in common: They signed the letter to the journal Science in May that called for continued investigation into the virus's origins, including the possibility of a lab leak.

Soon, public opinion polls showed more people favored the lab-leak theory than the market origin. And Biden ordered his intelligence agencies to look into the matter and report back within 90 days.

In the months since he signed the Science letter, Worobey has become more convinced that the pandemic began as a spillover in the market, where animals known to be capable of harboring the virus — such as raccoon dogs — were sold.

The Science letter was influential in taking conjecture that had once been derided as a conspiracy theory and propelling it into the mainstream of virus-origin debates, even making it, as Worobey puts it, "the leading contender" in the public mind for the origin of the pandemic.

"The pendulum has swung way too far to the other side," he said.

It has been known since the start of the pandemic that the Huanan market was linked to many early cases, and the first news reports invariably cited it as the likely source of viral spillover. But the joint report from the WHO and China this year presented a murkier picture, noting that some cases in December 2019 had no link to the market: "No firm conclusion therefore about the role of the Huanan market in the origin of the outbreak, or how the infection was introduced into the market, can currently be drawn."

The market was quickly closed, the animals culled before any were screened for SARS-CoV-2, and everything cleaned and sanitized soon after the outbreak began. Still, a subsequent investigation showed that traces of the virus were found on surfaces in the market, including drains, particularly in the area where vendors sold animals.

Worobey acknowledged that the clustering of infections could be misleading, saying the early focus on the market might have skewed data because epidemiologists might have looked for market-linked infections and missed infections occurring in areas getting less attention — a common tendency in research known as "ascertainment bias." But he concluded that the timeline and geography of early cases rule out such an error.

Chinese officials have said the Huanan market was not the source of the pandemic. China's government has pushed the idea that the coronavirus could have been brought to China from overseas, including from Fort Detrick in Maryland and through frozen food imports.

Worobey does not contend that he has proved definitively how the pandemic began. And his article is not a research study presenting fresh data, but rather is labeled a "Perspective" piece. Such articles typically aggregate and interpret information that for the most part has already been in the public domain.

Although the lab-leak idea was at first derided by many scientists and in the mainstream media as a conspiracy theory — one embraced by President Donald Trump and his allies as part of their rhetorical attacks on China and the "China virus" — the failure to find an animal host of the immediate precursor to SARS-CoV-2 has kept all hypotheses on the table.

The 90-day investigation conducted by U.S. intelligence agencies at the behest of Biden was inconclusive. Most agencies favored the natural zoonosis theory. One favored the lab leak. The only firm conclusion was that the virus was not a bioweapon.

Worobey said he was open to the possibility of a lab leak, simply because of the proximity of the Wuhan Institute of Virology to the first outbreak. But he examined the geography question more closely. If the virus came out of the lab, why did the first cases cluster in and around the market many miles away? And that market, he notes, had sold animals that were implicated in the first SARS epidemic of 2002-2003.

"It becomes almost absurd, in my mind, to imagine that this virus started at the Wuhan Institute of Virology, and almost immediately that person went to one of the few places that sold raccoon dogs and other animals that were implicated in SARS-1," he said.

His paper does not mention the Wuhan CDC laboratory. Chinese officials have insisted that SARS-CoV-2 was never in one of the country's laboratories, nor has it been found through tests in wild or domesticated animals.

Proponents of the lab-leak theory point to the lack of transparency of Chinese officials and the removal of experimental data from a database at the Wuhan Institute of Virology several months before the pandemic. Worobey's market-origin theory suggests an alternative scenario, one in which authorities were not eager to find proof that the spillover happened in a market with live animals that may have been illegally captured and sold.

Worobey also suggests that Chinese officials may have been embarrassed that the country's system for identifying and rapidly responding to novel pneumonia-like illnesses — a system put in place after the original SARS epidemic — was slow to detect the outbreak of illnesses caused by the novel coronavirus.

The Washington Post's Eva Dou contributed to this report.