DC will no longer require masks in many public settings, mayor announces 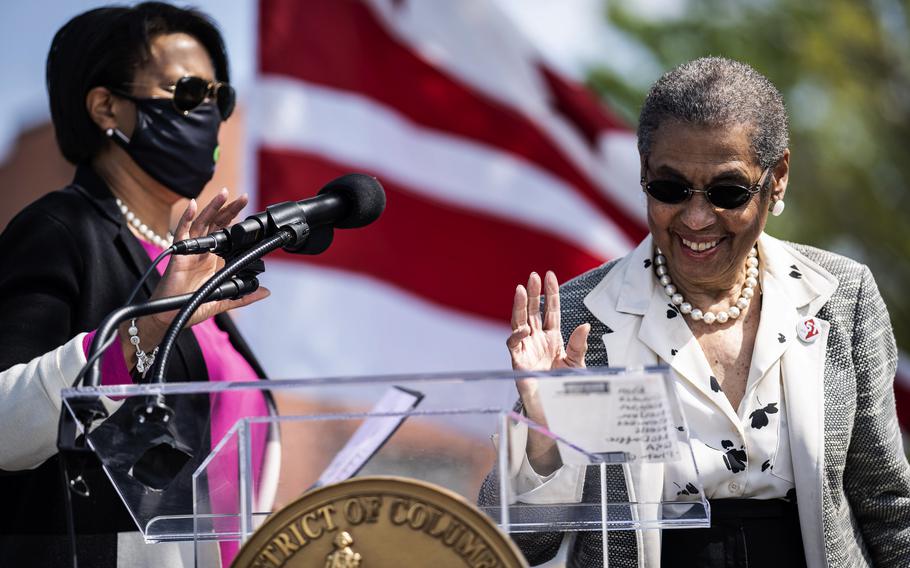 The District of Columbia had required residents to wear masks in most indoor settings since the delta variant caused coronavirus case counts to rise over the summer. On Tuesday, Bowser said that coronavirus vaccines are working: While case rates remain stubbornly above an average of 10 new cases per day for every 100,000 residents, vaccines are preventing most people who catch the virus from needing hospitalization.

That means it's time to let residents choose whether to wear masks in their office buildings, retail stores and many other settings, Bowser said. Local businesses can still choose to require masks, but it will not be legally required.

Local regulations will still require masks in some settings, including Metro trains and buses, ride-share cars, some government buildings and public schools.

Bowser said she will issue a mayoral order to bring the changes into effect, but had not yet signed the order when she announced the changes at a news conference Tuesday.

In recent weeks, some residents and business owners had questioned the District's reasoning for maintaining a strict indoor mask requirement. While some jurisdictions, including neighboring Montgomery County, set measuring sticks for when they would lift mask requirements, based on data like coronavirus case rates or portion of the population vaccinated, the District had no set metrics, and repeatedly told business owners and reporters who asked that epidemiologists in the District Health department would know when it was time to change the rules.

Some District workers who have in-person jobs indoors, interacting with the public, said over the weekend that they appreciate that the city has required masks longer than many surrounding jurisdictions and were not eager for Bowser to relax the rules. Some parents of children too young to get vaccinated had also pleaded with local officials to keep the mask rules in place to protect unvaccinated people.

Henry River, a janitor, wears a mask all day at work. "I have no problem with it," he said. Even though he's vaccinated, he worries about people going unmasked in some places he visits where he believes "there's no air circulation." He'll feel more comfortable, he said, once he knows more people are vaccinated. "Some requirements help at least."

Bellamy Bell, a grocery store worker, also said he hopes the mask mandate stays in place until "whenever they get solid evidence" that coronavirus cases are much scarcer than they are now. "I think it should be a requirement. You're around other people. You're out in public. It's a crowded area. There are a lot of people."

Bowser said Monday that she was getting ready to allow businesses to make their own mask rules "rather than the government telling you what you need to do to keep safe."

Grocery store worker Katherine Scott was eager for the requirement to end, so much so that she had been repeatedly emailing her District Council member's office and the local health department, asking what the metrics are for the end of the mandate.

She spent the pandemic working full time in a grocery store in New York, and was elated when the state stopped requiring masks indoors and she could take hers off. Then she moved to the District in September, and had to put her mask on again.

Since she got vaccinated, "I feel 100 percent safe. Everything I've read, from the CDC and any major newspaper, says the vaccine works — your risk of death goes to just about zilch," Scott said. "We're not requiring everyone to get in a car and wear a bike helmet. That's kind of how the mask feels. Essentially you're telling me I need to wear it, but I'm fully vaccinated. I'm doing the extremely safe thing. It's frustrating."

She went to District's 9:30 Club recently, and was irritated that staff told her to put her mask back on between sips of her beer. Thinking of the "glorious" rave that she attended in Manhattan, where attendees showed their vaccine cards at the door then partied without masks inside, Scott left the District club early. "I just want to go to another city where they're handling this better," she thought.