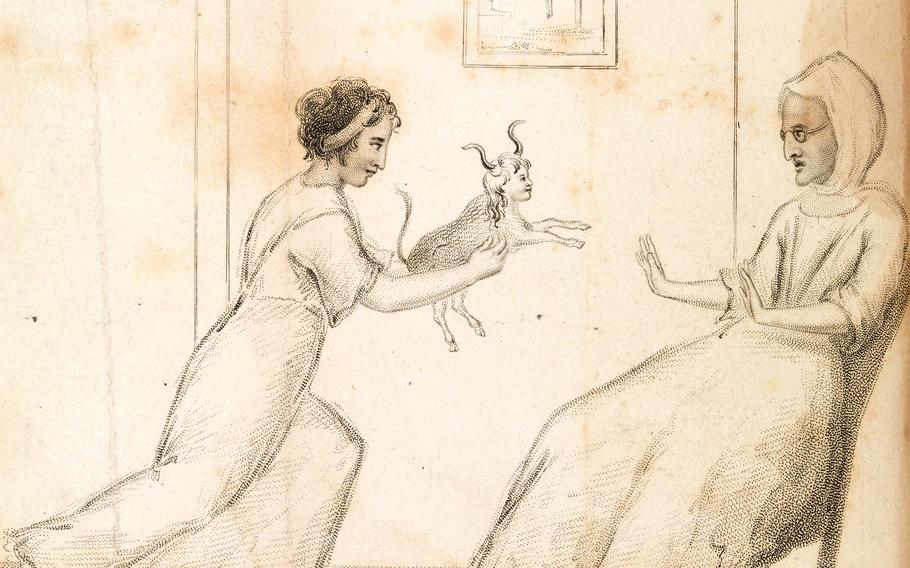 "Vaccinae vindicia; or, defence of vaccination," an 1806 work from English physician Robert John Thornton, included this illustration of the theories of Benjamin Moseley, a vaccination critic who suggested that cowpox injections might lead women to have sex with bulls and produce half-cow offspring. (Wellcome Collection/Public Domain)

In the early 19th century, British people finally had access to the first vaccine in history, one that promised to protect them from smallpox, among the deadliest diseases of the era. Many Britons were skeptical of the vaccine, however, with fears extending well beyond the fatigue and sore arm that go along with many modern shots.

With that, the world’s first anti-vaccination movement was born.

Just as quickly as doctors heralded Edward Jenner’s revolutionary 1796 discovery that the deadly smallpox virus could be prevented with a cowpox vaccine, some Brits met the news with a superstitious distrust that bordered on hysteria. Opposition to vaccination would grow and evolve over the next 100 years to become one of the largest mass movements of 19th-century Britain. People refused the vaccine for medical, religious and even political reasons — plunging the nation into a debate that would rage for generations and foreshadow current coronavirus vaccine conspiracy theories.

“It was an enormous mass movement, and it built on many traditions, intellectual and otherwise, about liberty,” said Frank Snowden, a historian of medicine at Yale University. “There was a rejection of vaccination on political grounds that was widely considered as another form of tyranny.”

Yet Britons had been living under a viral tyranny for much longer. By the turn-of-the- 19th-century, smallpox had ravaged much of the world. In Europe, some 400,000 people were believed to die annually from the disease. Those who did survive were often permanently disfigured.

The turning point came — or at least ought to have come — when Jenner discovered that dairymaids were often protected from smallpox because of their exposure to the less dangerous cowpox. He conducted an experiment to test his hypothesis that exposure to this similar disease might protect others from smallpox. He extracted pus from a woman infected with cowpox, injected it into a healthy boy and exposed him to smallpox. The child did not become ill. Similar experiments bore out the same results. 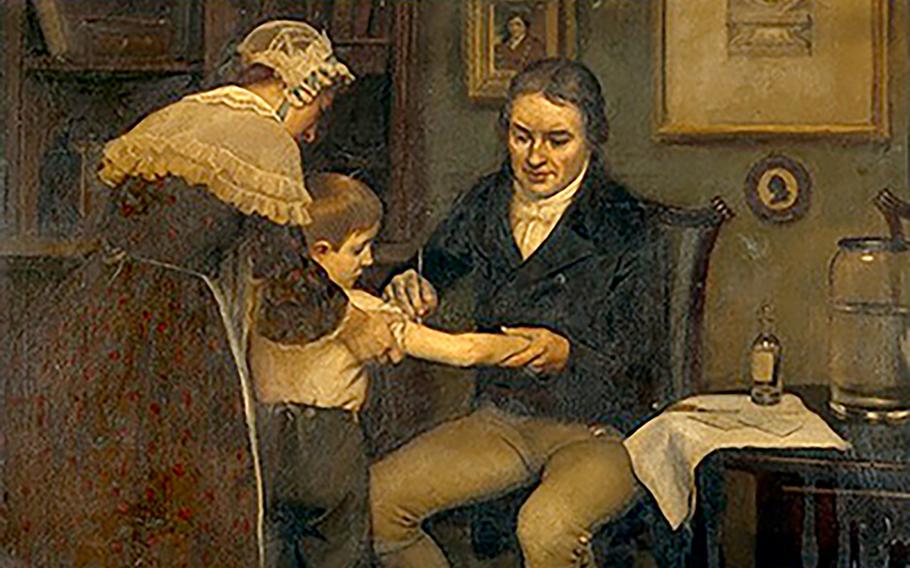 Jenner and his supporters heralded this discovery for the deliverance that it was. Politicians, fellow doctors and major thinkers of the day rejoiced. The writer Robert Bloomfield penned a poem in praise of Jenner, calling his discovery a “blessing.”

At the same time, some members of the general populace — along with several prominent doctors — were skeptical of the idea of being injected with a disease, especially a disease originating with a farm animal. Nineteenth-century Britain was a deeply religious society, and some condemned vaccination as a violation of humans’ God-given healing abilities.

“One can see it in biblical terms as human beings created in the image of God, and therefore being supreme,” Snowden said. “The vaccination movement injecting into human bodies this material from an inferior animal was seen as irreligious, blasphemous and medically wrong.”

Fiery pamphlets, lectures and caricatures tipped off a war of the words that would galvanize huge numbers of Brits into the anti-vaccination movement. In an 1805 pamphlet, William Rowley, a member of the Royal College of Physicians, warned against vaccination, threatening the direst possible side effects. Rowley (among others) went so far as to suggest that the injection of cow material into a human body could cause a person to begin to resemble a cow, sprouting actual horns out of his head and hoofs in place of feet. Even those who could not read would have easily understood the color engravings of an ox-faced boy with an enormous red lump hanging off his cheek, or a child covered in open abscesses.

And cowpox, Rowley wrote, would not only mar an individual but could end his bloodline all together. After all, Rowley warned, “Who would marry into any family, at the risk of their offspring having filthy beastly diseases?”

Much like anti-vaccine conspiracy theorists of today and their fears of microchips, opponents of the early smallpox vaccine warned of bizarre mental effects, alongside the violent physical reactions. The physician Benjamin Moseley claimed, only somewhat facetiously, that Jenner’s vaccine would lead to “cow mania,” a kind of hysteria that might cause women to want to have sex with bulls and create half-human babies.

Moseley and Rowley teamed up to travel across the country giving lectures, warning against the dire effects of vaccination. The doctors also had an economic interest in steering people away from vaccination, as the Public Domain Review noted recently. Both practiced variolation, an older form of inoculation against smallpox that involved scraping matter from a smallpox sore to infect a healthy person with the disease. Variolation was much riskier than vaccination — many patients died, including one of King George III’s sons — and it would eventually be entirely replaced by vaccination.

There was an important difference between anti-vaccine activists then and now: The range of choices was enormous in the medical field at the time. Britons could seek treatment from wise women or local healers, alongside physicians of varying legitimacy. And unlike today, there was neither scientific consensus on the efficacy of vaccines nor governing bodies such as the World Health Organization or the Food and Drug Administration to determine vaccine safety.

While fears of hoofed children and bestiality might seem ridiculous to a modern reader, some concerns were rooted in reality. Not only were vaccines much less safe than they are now — unsanitary needle practices meant patients risked tetanus, syphilis and hepatitis — they were also mysterious. Germ theory did not exist at the time of Jenner’s discovery, and it was often thought that disease was passed through unsanitary places rather than from person to person, making the notion of injections confusing. While Jenner could prove empirically that the vaccine worked, he couldn’t accurately explain why it worked.

The anti-vaccine movement would take on fresh momentum after England and Wales made the smallpox vaccine mandatory for children in 1853. Where anti-vaccine sentiment in the early 19th century was often amorphous and grass-roots, by the Victorian era a highly organized movement took shape, with anti-vaccination leagues sprouting local arms in cities and towns across Britain. By the end of the century, tens of thousands of people would take to the streets in protest, brandishing signs such as “Better a felon’s cell than a poisoned babe.”

Following the mandate, the protests were no longer limited to the vaccine itself. Rather, the vaccine became a magnet for broader distrust in government. “Like today, people in the middle part of the 19th century, when vaccination is made compulsory, are experiencing an enormous upheaval in terms of the political environment, the scientific and medical environment, technological change, new information, new connectedness — everything is changing so fast,” said Kristin Hussey, a historian of medicine and author of “Imperial Bodies in London.” “Vaccination really becomes a lightning rod for a lot of these concerns around the individual and the state.”

The positive effect of the mandate, however, was impossible to deny. Despite the anti-vaccine movement, the laws making smallpox vaccination compulsory succeeded by many measures. Smallpox deaths dropped by more than a quarter in the years after the passage of the mandate. Among children, the result was even starker: Their death rate dropped by 50%. And by 1934 — some 138 years after Jenner’s discovery — smallpox would be considered eradicated in Britain.