As children’s vaccines roll out, pediatricians are overwhelmed, understaffed but eager to help

by
Marisa Iati and Lindsey Bever
• The Washington Post • November 10, 2021 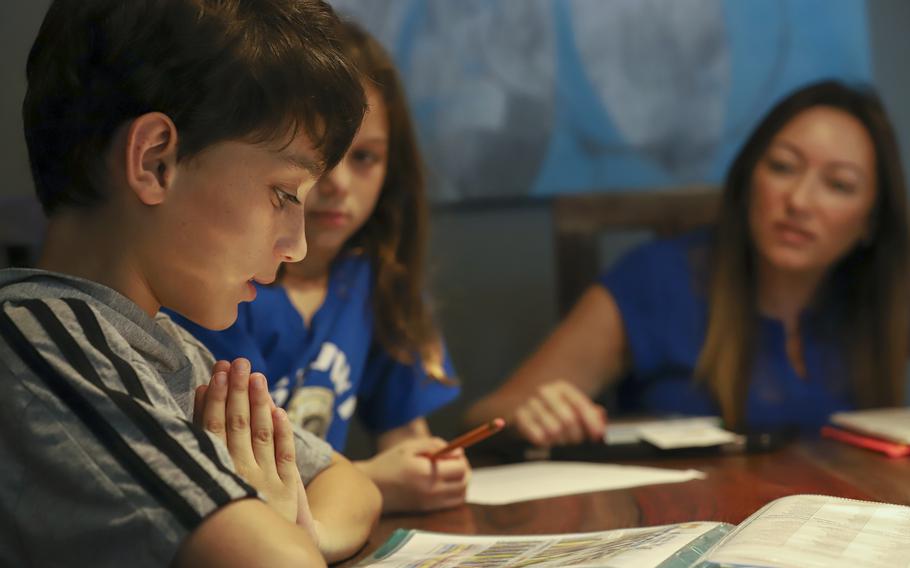 The moment April Lowe learned that a coronavirus vaccine had been recommended for children ages 5 to 11, she called her kids' pediatrician.

Before federal health authorities gave the green light, Lowe, 36, of Jackson Springs, N.C., had tried unsuccessfully to persuade the doctor to vaccinate her oldest son, explaining that he was almost 12 and that his history with asthma and other respiratory issues put him at higher risk for severe disease. She also attempted to get her children into a clinical trial. So when she got the doctor's office on the phone last week, she booked the earliest appointment and got her 7- and 11-year-old sons vaccinated.

And when a vaccine becomes available for her 2-year-old, she said she will not hesitate.

"I knew beyond a shadow of a doubt that as soon as they were approved, we were getting them," she said of Pfizer-BioNTech's vaccine.

As parents like Lowe have sought to immunize their 5-to-11-year-old children, pediatricians say demands for their time have surged to strain the capacities of their practices, many of which are experiencing shortages of nurses and support staff in line with national labor trends. Pediatricians nationwide describe a crush of appointment requests that has both overwhelmed and energized them as they seek to keep children from contracting or spreading the virus that causes COVID-19.

The deluge of phone calls began in the summer, when plummeting coronavirus infections spurred day cares and schools to reopen in person, sometimes without mask requirements. Common respiratory viruses surged, and a flood of patients returned for regular checkups and vaccinations that they had delayed at the pandemic's apex. Pediatricians also continued to monitor the mental health of their patients, many of whom have experienced heightened depression, anxiety or behavioral issues since the pandemic began, doctors said.

Then the highly infectious delta variant of the coronavirus fueled a new wave of cases, which increased the need for testing. Pediatricians quickly found themselves "underwater," said Michael Martin, president of the Virginia chapter of the American Academy of Pediatrics. In a "call for help" shared on Facebook in September, Martin wrote that pediatricians' offices could not keep up with demand for visits because of staff shortages, health-care workers' burnout and a significant increase in coronavirus testing required by day cares and schools.

Now, those pediatricians are also racing to vaccinate their patients against the disease that has claimed the lives of more than 600 children in the United States since the start of 2020. Although schools and pharmacies are helping with distribution, pediatricians face most of the responsibility for vaccinating kids.

"We're excited for children to get the vaccine," said Christoph Diasio, a pediatrician in Southern Pines, N.C. "It's hard work, but doing hard work is what we do in primary care."

Lee Savio Beers, president of the American Academy of Pediatrics, said the speed with which doses are being allocated depends on the state. Alabama, Florida and Oregon have been particularly slow, an AAP spokesperson said.

The White House has said that the rollout of vaccines for children ages 5 to 11, which come in smaller doses and different vials, would not be fully operational until this week.

Representatives of Alabama's health department did not respond to a request for comment.

More than 900,000 children ages 5 to 11 will have gotten their first vaccine dose by the end of Wednesday, and an additional 700,000 appointments have been scheduled at pharmacies, White House coronavirus response coordinator Jeff Zients said Wednesday.

Pediatricians from California to Virginia say they have a long list of names of parents who want to get their younger children immunized. Some doctors have office staffers dedicated to making the appointments. And most are holding vaccine clinics, often after business hours, to get shots in small arms.

Several pediatricians said they expected demand to align with a Kaiser Family Foundation survey from last month that found that about 27% of parents were eager to get their children vaccinated as soon as possible. Doctors said they anticipate that the initial surge will eventually give way to a lower vaccination rate, as a third of parents say they plan to take a wait-and-see approach.

"I have some parents basically vibrating with excitement because they want it right away," Diasio said. "There are definitely families who are a little hesitant, who don't want their children to get the shot Week 1 and want to see how it goes. But we have a lot of parents who are really excited to get it for their kids."

There are exceptions to the trend. Children's National Hospital in the District is experiencing hesitancy, said Claire Boogaard, medical director of the hospital's coronavirus vaccine program. She said the hospital has offered more than 15,000 appointments but booked only a few hundred.

While the hospital's vaccine clinics targeting high-risk children have been well-attended, Boogaard said many parents at the medical center's 14 primary-care locations are less sure about whether to vaccinate.

"The primary-care physicians own a lot of the hesitant group, so the people who need personal reassurance, someone to answer their direct questions," she said.

For pediatricians struggling to meet the demand, among the biggest challenges has been a nationwide shortage of the nurses, medical assistants and support staffers who keep their offices running. Open administrative positions have complicated the logistics of distributing a new vaccine, and many pediatricians are administering those immunizations themselves because of a lack of the nurses and medical assistants who would normally take the lead.

"We all went into this field to take care of kids," said Kate Williamson, a pediatrician in Orange County, Calif. "And we know that this is just a time for us to step up and work a little more to save lives."

In Virginia, Martin said 91% of 262 pediatricians he surveyed were short on staff in September. Nearly three-quarters said they had turned away or redirected sick patients in the past month, and 38% said they could not complete the amount of coronavirus testing requested by families and schools.

Some primary-care facilities would not necessarily be short-staffed if they were facing a normal level of demand, Boogaard said, but they are struggling to hire extra help to meet the current need. The number of traveling nurses that could normally step in has decreased because of the same burnout affecting other health-care workers, she said, and most of those who remain have already been hired.

Some doctors' offices have managed to find temporary or as-needed staff members to fill gaps. Others have temporarily condensed their locations. At least one office wrote to parents to ask for both their patience and suggestions of job candidates. They received several leads in response, Beers said.

But most pediatricians said they are focusing on maximizing their remaining employees' efficiency while trying not to overwork them and drive them to quit. More than 450,000 health-care workers have left the industry since February 2020, the Bureau of Labor Statistics reported this month. Last month, the Department of Health and Human Services committed $100 million to recruit and retain clinicians.

Pediatricians in some states appear already to have passed their busiest period of the fall. Sally Goza, who practices in Fayetteville, Ga., said she experienced a big uptick in COVID-19 patients in August and September, as students returned to schools while the delta variant spread.

Demand has since subsided, Goza said, but doctors at her practice are still filling gaps left by a shortage of nurses and trying to meet initial requests for pediatric vaccines. A vaccine clinic scheduled for this coming Saturday is already full.

"It really is almost a call to action for pediatricians that now's our time to step up to the plate," Goza said.

Lucia Benzoni, a doctor with Hartford HealthCare Medical Group Pediatrics in Litchfield, Conn., said increasing numbers of her patients have recently been testing positive for the coronavirus, which she expects will be "a big impetus" for parents to get their younger children vaccinated.

The effort to get shots to kids in the coming months is likely to be "all hands on deck" for pediatricians, Diasio said.

"Yes, it's hard. Yes, it's difficult. No, I can't make more staff appear," he said. "But at the end of the day, this is an incredibly important thing for the health of children in our communities. And we will find a way to get it done, because we do difficult things all day long."

The Washington Post's Katie Shepherd contributed to this report.