This besieged Syrian province escaped the worst of COVID; then vaccine skepticism crossed the border

by
Kareem Fahim and Hussam Ali
• The Washington Post • November 2, 2021 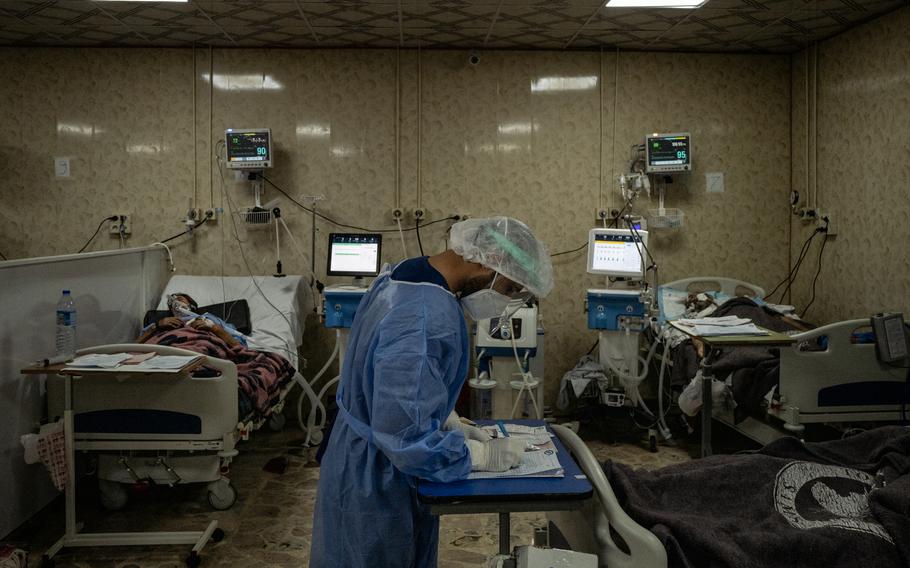 A medical worker checks on a covid-19 patient in the intensive care unit at al-Ziraa Hospital in Idlib, Syria, on Oct. 12, 2021. (Nicole Tung/for The Washington Post)

IDLIB, Syria — For weeks, Ibrahim Abboud, an administrator at a hospital here, had been surviving on little sleep, consumed by worry and guilt, he said. The coronavirus intensive care ward was running out of beds because of an alarming spike in infections.

Among its patients was his 52-year-old mother.

He watched her on a security-camera feed in his office as he sat at his desk every day. “My mistake was, I didn’t force her to take the vaccine,” he said. He had tried pleading with her, but she was swayed by rumors about the vaccine’s potential to cause harm, he said.

“This craziness is not limited to one place. It’s international,” Abboud said of the doubts about vaccination, which have left stockpiles of doses in Idlib unused.

Idlib is one of the most vulnerable places in the world for infection: an impoverished rebel-controlled province in northwestern Syria filled with people displaced by war, most of them crowded into tent camps or rickety settlements erected in olive groves or on barren hillsides.

As the virus circulated around the world, there were warnings that Idlib’s hospitals were perilously underequipped, without enough ventilators. And after years of treating war casualties, its doctors were exhausted.

But Idlib’s borders are largely sealed, and for much of the pandemic, isolation was a virtue, sparing the province from the worst ravages of the outbreak. Some dangers could not be kept out, though.

As large quantities of vaccine doses started arriving in April, conspiracy theories circulated on social media, YouTube and WhatsApp groups, warning that the vaccines, from Britain and China, were either deadly or a tool in nefarious and unspecified foreign plots, residents said. Then in August, infections started to surge after Syrians living in Turkey were allowed to visit Idlib for the Eid al-Adha holiday. The visitors brought the virulent delta variant with them, doctors said.

The nightmare scenario that public health officials had long warned about began to unfold: The virus started racing through some of the hundreds of displacement camps.

As of last month, Idlib and nearby areas have recorded 78,000 infections since the beginning of the pandemic, but 51,000 of them — and half of the more than 1,400 COVID-related deaths — have occurred since just Aug. 1, according to the province’s health directorate. Because of the scarcity of testing kits, doctors and health officials said, the numbers probably do not reflect the actual toll.

The province and other areas in northwest Syria have been sent more than half a million vaccine doses, manufactured by AstraZeneca and Sinovac. But as of this week, only 39,500 people in Idlib — or about 1% of the population — have been fully vaccinated against the coronavirus, according to the World Health Organization.

Health officials worry that the crisis could worsen as winter approaches and camp residents are forced to stay inside, in close quarters with large extended families. As infections have soared, Idlib’s isolation has become a curse. For days last month, there were no PCR tests available, and doctors were forced to diagnose COVID-19 using CT scans. Oxygen is becoming scarce and expensive as critical-care wards fill to capacity.

The governing body in Idlib, associated with the Islamist militants who are the real power in the province, has neither the resources nor the personnel to confront the pandemic. Instead, the health response is cobbled together by nonprofit organizations, international organizations, beleaguered doctors and a few well-meaning public servants. Local authorities imposed a two-week lockdown last month but lifted it before it had any measurable effect on the infection rate, doctors said.

Ambulance workers in Idlib city said they were transferring up to 20 bodies a day for burial and working round-the-clock shuttling patients from regular hospitals to COVID wards. But elsewhere in the province, following the lockdown, life continues as if nothing were amiss, as schools, restaurants and buses fill with people, barely a mask in sight.

To doctors, the scenes are beyond alarming. “If this peak continues for another month, we will face total collapse,” Abboud said. 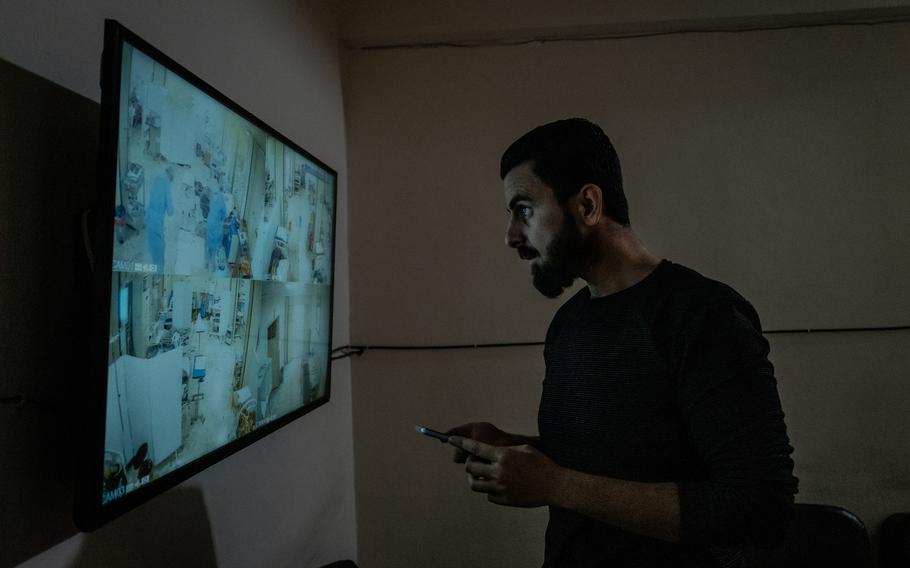 Ibrahim Abboud, 30, monitors security-camera footage of the covid ICU at al-Ziraa Hospital on Oct. 16, 2021. His mother, Amal, was among the critically ill patients. (Nicole Tung/for The Washington Post)

The province, a front for battles between Islamist rebels and the Syrian government, appears almost singularly ill-equipped to confront an outbreak. Half of its 4 million people are dislocated by war from someplace else. Poverty and hunger are rife, and more than 2 million people are in acute need of humanitarian aid. Many children are suffering from stunted growth, and pregnant women from malnutrition. There are not enough doctors, and many of its hospitals and health centers have been damaged or destroyed by fighting, or airstrikes carried out by the Syrian military and its Russian allies.

Idlib experienced an earlier coronavirus surge, in the fall of 2020, when cases sometimes reached 500 infections a day, according to Saleheddin Saleh, a doctor who works with Abboud at al-Ziraa Hospital, one of several hospitals in Idlib supported by the Syrian American Medical Society, or SAMS.

During the current spike, infections sometimes surpass 1,500 people a day, he said. “We have started to see pediatric cases and infections among young people,” he said. “Many of the cases are severe.” The biggest worry is the rising number of patients coming from the camps, where social distancing is difficult to enforce and the virus is quickly claiming the elderly and the sick.

Ahmed Rahal, 77, who had a history of heart problems, was infected this fall, his wife and his grandson said. Rahal had been living in a tent in a small camp and “got the virus from socializing with other people,” said the grandson, who is also named Ahmed Rahal.

Last month the grandfather was moved to a coronavirus isolation center in Idlib city, but doctors were unable to find him an intensive care bed, his family said. For days, his wife, Fatoum Madhi, kept an anxious vigil outside the isolation ward, desperate to see him but powerless to ensure he received better care.

“I want to change his clothes, to give him water,” she said, as she sat on a bag of cement in a dusty parking bay, squeezing her phone, as if the pressure would force it to deliver good news. A day later, though, her husband was dead.

At a tent in another camp with hundreds of residents, mourners gathered to pay their respects to Saleh Mohammed al-Kanash, who had spent seven days in a hospital intensive care unit until dying in mid-October at age 102, said his grandson, Ibrahim al-Kanash.

A majority of the camp’s residents had been infected, and at least 10 had died, he said. The grandson, who worked in a kitchen at Idlib city’s University Hospital, said he had been vaccinated along with the medical staff. But, he added, most of the people living in his grandfather’s camp had not been immunized. 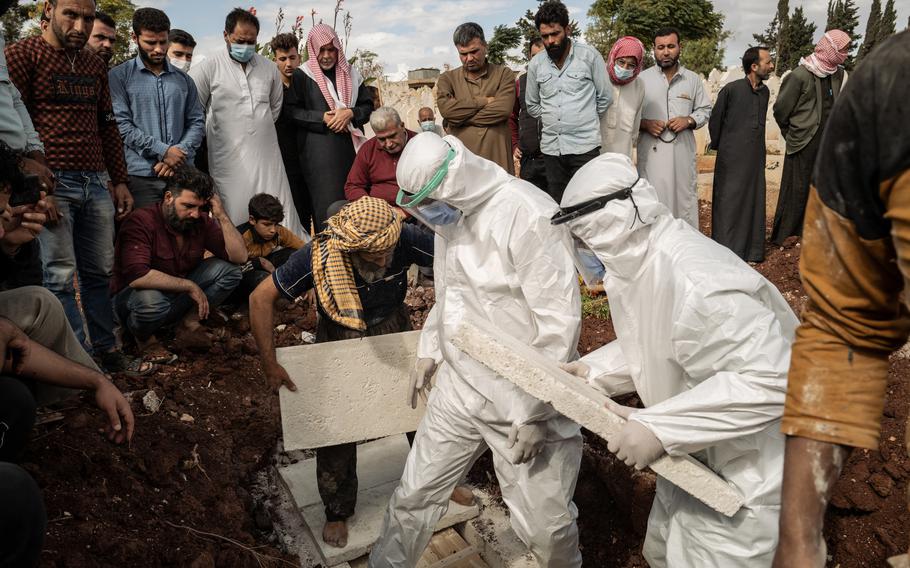 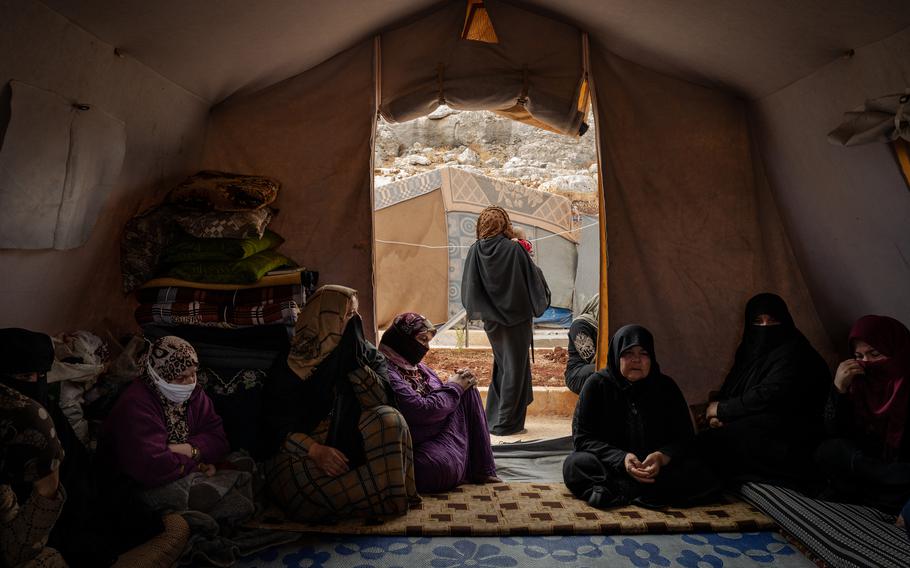 Saleh Mohammed al-Kanash's female relatives mourn for him on Oct. 17, 2021, at the Kili Camp for internally displaced persons. (Nicole Tung/for The Washington Post)

Idlib’s relative success at avoiding catastrophe earlier in the pandemic seemed to explain some of the nonchalance among its residents, doctors said.

“People think, ‘We will manage without the vaccine.’ Coupled with low mortality, people didn’t take it so seriously,” said Caroline Masunda of Doctors Without Borders, which also supports hospitals in Syria. “Now there is death at the doorstep.”

Doctors said they were also struggling against a sense of fatalism that had taken hold in a population that has faced death so many times and in so many ways over the past decade. “The people of this area have been a target of killing for years. You feel they don’t care anymore,” said Khaled Alhajji, a cardiologist who worked at al-Ziraa Hospital.

Asma al-Leban, 22, had been among those skeptical about immunization. She had been considering getting vaccinated, but balked because of the rumors that the vaccines were deadly. Then, a few weeks ago, she became infected. Now her 5-month-old daughter, Aseel, has the virus as well.

The baby screamed from an examination room as doctors at Ibn Sina, a pediatric hospital, drew blood from her hands. Hearing her, Leban began to cry.

“People come to hospitals and are surprised at what they see,” said Abdulrazaq Zaqzoq, 27, a media assistant at the hospital who escorted reporters through the ward.

“They feel like life is normal. But in the hospitals, you feel the danger. It is out of control.”

The doubts about COVID vaccines are especially puzzling to doctors, because they had not seen similar skepticism towards vaccines for other diseases, said Abboud, the hospital administrator. But in the past 10 days, there has been a slight increase in Idlib’s vaccination rate — a sign that the rising death toll may be starting to chip away at the conspiracy theories.

If attitudes are changing, it has come too late for Abboud’s mother, named Amal, which means hope. She had been persuaded to avoid the vaccine by “people she trusted,” he said. She died in her son’s hospital last week.