Thousands were gathered Sunday for Shanghai Disneyland’s Halloween party when suddenly the gates closed and health care workers fully dressed in white protective suits descended on the site. It was like a scene out of a scary movie, but these people weren’t in costume.

The site had been ordered to shutter its doors after a woman who visited Disneyland over the weekend tested positive Sunday for the coronavirus, according to Chinese media. Partygoers at the park that day were told they couldn’t leave until they got tested for the coronavirus. Officials tested more than 30,000 people who had gone to Disneyland that weekend. They all tested negative.

Shanghai Disney Resort said in a statement Sunday it was cooperating with “the pandemic investigation in other provinces and cities” by suspending entry into the park temporarily and closing some of its attractions.

The organization said in addition to getting tested to leave the park, guests would be required to take another test after 24 hours.

Despite the unexpected twist to their Halloween plans, parkgoers did not appear too upset about the inconvenience.

“No one complained, and everyone behaved really well,” one woman told the Associated Press.

Photo and video from the scene showed throngs of people waiting to leave as fireworks lit up the sky over a majestic castle.

The massive contact tracing effort came as China grapples with new pockets of coronavirus cases amid the spread of the delta variant. The country has reported more than 400 domestically transmitted cases since Oct. 17, prompting lockdowns and restrictions as Beijing continues to pursue a zero-tolerance strategy against the virus.

Health officials said this particular increase in cases was concerning and not yet under control.

In addition to the shutdown in Shanghai, Chinese officials have gone to great lengths to trace and contain the spread. Last week, two high-speed trains traveling to Beijing were halted because each one had a passenger in close contact with a confirmed case. No one on board tested positive, but all of the nearly 350 people on board were put in quarantine.

The crackdowns have left tourism, restaurant and entertainment businesses hurting, as border restrictions come into place and some provinces shut down cafes and cinemas. 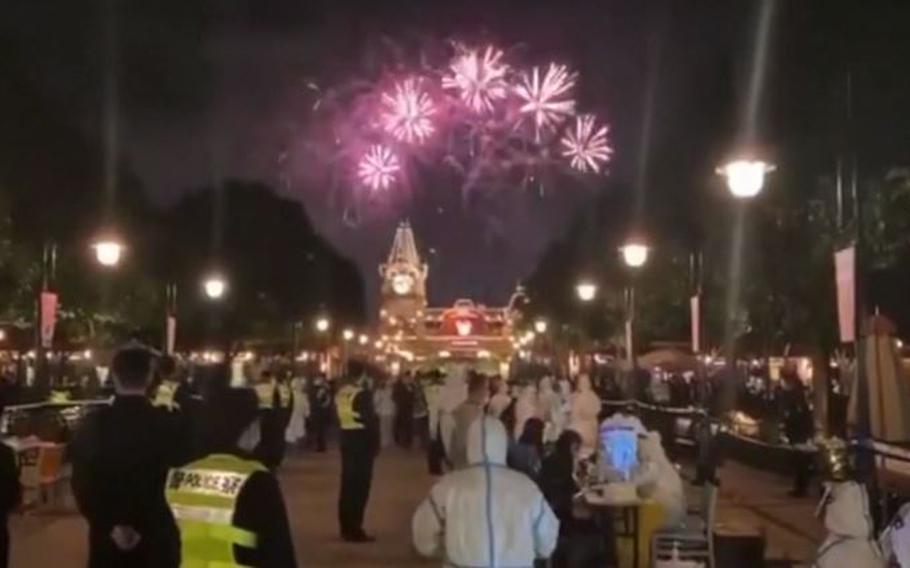