The Food and Drug Administration is delaying a decision on whether to make Moderna’s coronavirus vaccine available to adolescents because the agency needs more time to evaluate if the shot increases the risk of a rare cardiac side effect, the company said Sunday.

Moderna, a Cambridge, Mass., biotechnology company, said in a news release that the FDA indicated it will take until at least January to complete the review of Moderna’s application for use in 12- to 17-year-olds. The agency told the vaccine maker Friday evening it needed more time to analyze emerging international data on the risk of myocarditis, an inflammation of the heart muscle that in rare instances occurs after vaccination.

The agency’s action comes after several countries, including Japan and Nordic nations, raised concerns that the Moderna vaccine increases the risk of myocarditis in men 18 to 30 years old. In Finland and Sweden, authorities have recommended against the use of Moderna for men younger than 30.

Moderna asked the FDA in June to authorize its vaccine for adolescents. The shot is authorized for people 18 and older. The proposed vaccine regimen for adolescents is the same as that for adults - two 100-microgram shots, given 28 days apart.

The company also said Sunday it will delay asking the FDA for authorization of its vaccine for children 6 to 11 years old. That age group would receive two shots of a half dose of 50 micrograms.

The Moderna delays are occurring as Pfizer and its German partner, BioNTech, make rapid inroads with their vaccine into younger age groups.

The FDA last spring authorized the Pfizer-BioNTech vaccine for adolescents 12 to 15 years old. And on Friday, the agency cleared the vaccine for children 5 to 11, administered in two shots of 10 micrograms. That dose is one-third the adolescent and adult dose. The vaccine is expected to be available for younger children this week, following a review by immunization advisers to the Centers for Disease Control and Prevention and likely recommendation by CDC Director Rochelle Walensky.

In its statement, Moderna said “the safety of vaccine recipients is of paramount importance” and that it is working closely with the FDA.

The Washington Post reported in August that Moderna’s coronavirus vaccine for adolescents had been delayed. Federal health officials were scrutinizing reports that the shot might be associated with a higher risk of myocarditis in young men than the Pfizer-BioNTech vaccine, according to two people familiar with the review at the time who spoke on the condition of anonymity because they were not authorized to discuss the situation.

Federal officials concluded at that time that there was not a problem. But soon afterward, several Nordic countries said new information on the myocarditis rate in Moderna recipients was raising concerns, prompting the FDA to take another look, The Wall Street Journal reported recently. The Nordic data has not been publicly released.

Both the Moderna and Pfizer-BioNTech vaccines have been linked to an increased risk of myocarditis among young men after the second shot. Federal officials and physicians have said the vaccine-induced myocarditis tends to be mild and easily treated - and that covid-19, the disease caused by the virus, can cause much more severe myocarditis and other serious problems.

The Moderna and Pfizer-BioNTech vaccines use the same technological platform, known as messenger RNA.

Data from the United States on whether the myocarditis incidence in Moderna is higher than with the Pfizer-BioNTech vaccine has been mixed, with one data set showing a higher risk and other data not showing an increased risk.

Moderna said more than 1.5 million adolescents have received its coronavirus vaccine worldwide and that its global safety database does not suggest an increased risk of myocarditis in that age group. It added that it does not yet have access to data from some recent international analyses. 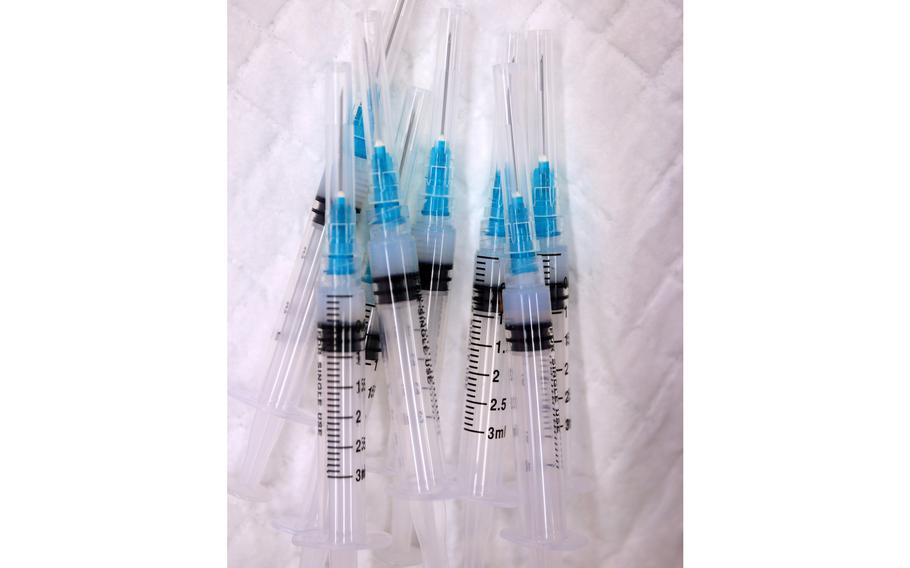 Syringes loaded with doses of the Moderna coronavirus vaccine are ready to be used on May 21, 2021, in Wheaton, Md. (Chip Somodevilla, Getty Images/TNS)