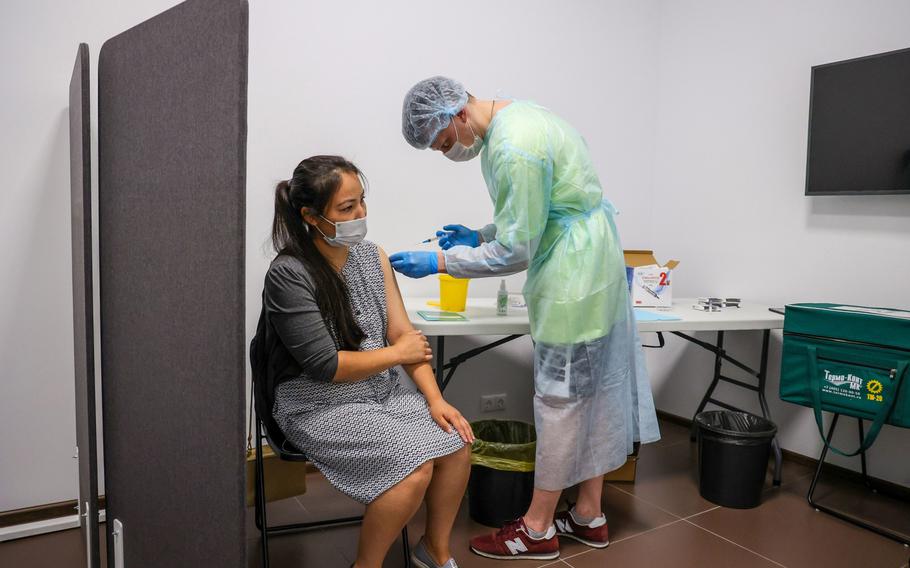 A worker receives a dose of the Sputnik V COVID-19 vaccine at a Yandex office in Moscow on June 28, 2021. (Andrey Rudakov/Bloomberg)

MOSCOW — A routine medical checkup in mid-September nearly cost Alexander Ivanov his life. The clinic was packed with people, almost no one wearing masks.

“Or distancing,” he said — a common sight in Russian public spaces and on transport. “I even told some of the people that they should be wearing masks, but people didn’t care.”

Three days later he fell ill with the coronavirus and wound up in intensive care in Yekaterinburg, in Russia’s Urals region. The 47-year-old resident — who was not vaccinated — watched other patients dying, thinking he was next.

Russia’s catastrophic “fourth wave” is a cautionary tale for a failing vaccination campaign, showing the difficulties in correcting course after the government’s confused, on-off messaging about COVID-19.

Russia’s pandemic measures began with a strict lockdown in early 2020 and dropped before a crucial July 2020 vote on constitutional changes. This summer, Moscow brought in QR codes to prove vaccine status to enter bars, restaurants and cafes, but the unpopular measure was abandoned after a few weeks.

Some analysts say Russians’ distrust of authorities and skepticism of doctors — going back to Soviet times — helps explain the country’s vaccine reticence. Others blame anti-vaccine activists and rampant disinformation on social media.

But the result leaves Russia as a pandemic hot spot, while countries with higher vaccination rates are lifting restrictions.

Almost daily, a grim record of Russian deaths is marked: more than 1,100 a day, according to official figures. That is still understated, many independent analysts say. Hospitals are struggling and small business owners are angered by the reimposition of restrictions, including a partial lockdown from Thursday.

As authorities played down the crisis before September parliamentary elections, Russia’s vaccination rate hovered among the lowest globally. In recent weeks, officials have ramped up warnings about the coronavirus and the need for vaccines.

Russia’s Ministry of Health says it has fully vaccinated 8 million Russians since Oct. 14, bringing the current total to 50.9 million, or about 35 percent of the population. That compares to 74% in Canada, 72% in Japan, 68% in France, 67% in Britain, 66% in Germany and 57% in the United States, according to the Britain-based Global Change Data Lab.

Ivanov is not against the vaccine, but his attitude illustrates how the government failed to convince even those not opposed to vaccines. A retired policeman who spends a lot of time with his dogs and chickens at his small farm outside Yekaterinburg, he didn’t think the jab was necessary.

In intensive care for several weeks, his only contact with the outside world was a doctor who reported his condition to his family and read them notes he wrote.

“So I wrote, ‘Don’t worry, I’m OK.’ But of course I was thinking I could die, especially when I saw people around me dying,” Ivanov said.

Vlad Nesterov — father-in-law of Ivanov’s daughter — had similar views about getting the virus. He also fell sick in late September, along with his family and almost everyone in the office where he worked.

Nesterov, a journalist, thinks he picked it up at an office birthday party. There was plenty of vodka and toasts and many guests later came down with COVID-19.

“I’m not against the vaccine. It’s just that I thought that Jesus Christ would help me, and whatever should happen would happen,” said Nesterov. He spent four weeks battling the coronavirus at home, ill and constantly exhausted.

St. Petersburg doctor Lev Averbakh feels as is if he is wading against a tide of ignorance, apathy and disinformation. “I am so sick and tired of explaining to people what this virus is about and why they need to be vaccinated. This resistance from the population is huge,” he said in an interview.

Another doctor, Sergei, working in the “red zone” — or the coronavirus treatment unit — at a regional hospital, no longer feels much compassion for unvaccinated patients. He just thinks about the generous red zone bonus payments that means he earns double his normal pay.

“But we COVID doctors are very cynical now, because of these COVID payments. For us, COVID is good, as awful as that might sound,” said the doctor, who spoke on the condition of anonymity because of fear of reprisals. “For us, the worse the COVID situation is the better,” he said, referring to doctors’ bonuses.

Afew months ago, he asked every one of 120 coronavirus patients under his direct care if they had been vaccinated. All said no, citing vague reasons such as “side effects or genetic problems,” he said.

His 200-bed hospital was ordered to add 70 extra beds when the disease peaked.

“And there was no space to put beds. We had to stick beds in the corridors, in the operating theaters, anywhere we could find a space,” said the doctor. Patients without coronavirus-related illnesses were sent home prematurely, he said, only to return soon after, sicker than ever.

With cases hitting record highs, hospitals across Russia are under similar intense pressures.

One person in Siberia took drastic action: he bought PPE gear, disguised himself as a nurse and snuck into the “red zone” at Tomsk Medical Sanitary Unit No. 2 to check on his 80-year-old grandmother.

Identifying himself only as Sergei, he videoed himself pulling on a white protective suit, surgical gloves, blue goggles and a mask, and walking up the hospital’s interior stairs.

“Grandma, hi. Quiet, quiet,” he said, approaching her bed, recording multiple black bruises on her arms and discovering that her diaper had not been changed and pressure sores had not been bandaged. The video was aired Wednesday on Tomsk independent television TV2.

He spent nearly nine and a half hours in the hospital the first day and returned a day later to find her unwashed, lying again in a dirty diaper, he said. On day three, a doctor confronted him and he fled.

Antonina Stoilova, head of therapeutics at the hospital, said all patients are properly cared for, TV2 reported.

Russian authorities have ordered a partial lockdown to regain control, including a nonworking week until Nov. 8. But instead of staying home, many people are jetting off on vacation to Egypt, Turkey or Russia’s Black Sea coast, according to travel agents cited in Russia media.

One Russian posted a TikTok video on Oct. 26 from Cide on Turkey’s Black Sea coast, panning across crowds frolicking in the sea. “The beaches are packed. The sea is warm. The temperature is 30 degrees (86 degrees Fahrenheit). People are delighted, resting. Only in Russia is there a lockdown,” she said.

Kremlin propagandist Margarita Simonyan, editor in chief of state-run RT, said on Telegram she had a change of heart about anti-vaccine claims because children were dying “en masse.”

“At first, the anti-vaxers evoked my understandable sympathy. People are afraid, people are not explained, people are confused,” she wrote Oct. 20. But now she calls them a threat to children’s lives.

“Choke on ventilators, crawl with an [oxygen] saturation of 70 in the corridors of jam-packed hospitals,” she wrote. “That’s your choice. But I cannot forgive you the deaths of my country’s children.”

“If any other country had the same information policy as Russia,” she said, “everything would be the same.”

The Washington Post’s Natasha Abbakumova contributed to this report.