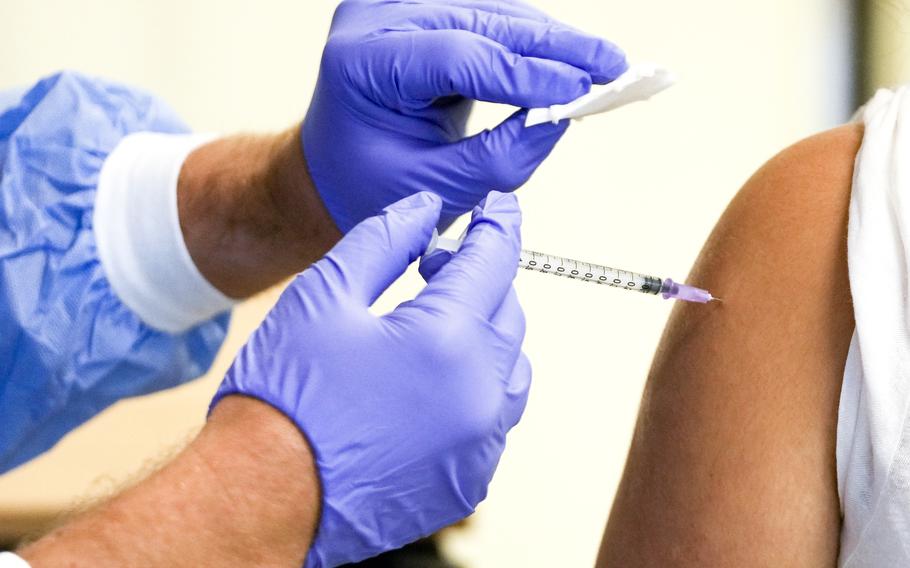 “This is a population that is really, really at risk due to the way that covid-19 interacts with the diagnoses,” said Lisa Dailey, executive director of the Treatment Advocacy Center. “Until the CDC put this group of disorders on their list, they would not have known that.” (Markus Schreiber/AP)

When the Centers for Disease Control and Prevention added mood disorders to the list of conditions that put people at high risk for severe covid-19 recently, clinicians were not surprised. The mind-body connection, they say, is long-settled research.

But the scientific seal of approval is still critical: It makes millions of people eligible for booster shots based on their mental health diagnosis alone and gives vulnerable groups more reason to protect themselves.

“This is a population that is really, really at risk due to the way that covid-19 interacts with the diagnoses,” said Lisa Dailey, executive director of the Treatment Advocacy Center. “Until the CDC put this group of disorders on their list, they would not have known that.”

The CDC on Oct. 14 added “mental health conditions” to a long list of mostly physical conditions that make someone likely to be hospitalized, need a ventilator or die of the coronavirus, including cancer, diabetes and obesity.

The change means it is important for people with “mood disorders, including depression, and schizophrenia spectrum disorders” to get vaccinated - with initial doses and boosters - and take preventive measures, such as masking, social distancing and hand-washing, according to the CDC.

Public health experts say these precautions are critical for people who are older or have multiple conditions on the list, which is not intended to be comprehensive and has been updated frequently throughout the pandemic.

The addition of mental illness to the high-risk list could put millions of Americans on notice.

In 2019, more than 19 million people - nearly 8% of adults in the United States - had at least one episode of depression, and at least half that number were diagnosed with depression, bipolar disorder or schizophrenia, according to federal data.

The numbers have only grown since then, according to research published this month in the journal Lancet. Worldwide, the pandemic triggered 53 million new cases of depression in 2020, a 28% increase from the previous year, the research shows.

The statistics underscore the suffering Dana Mueller, director of adult and family medicine at Mary’s Center, the D.C. community health clinic, has seen during the pandemic.

Her patients, many of whom are front-line workers, have more anxiety and depression, as well as out-of-control diabetes, hypertension and obesity, and often multiple risk factors at once. Yet 11 months into vaccine availability, Mueller is still giving first doses. That’s why, she said, her relationship with her patients - combined with scientific backing - is key.

“They’re just waiting to hear it from us. Anything we can say to say, ‘This matters and you’re at increased risk,’ “ Mueller said.

Advocates at the local and national level lobbied the CDC for months to consider adding mental illness to the high-risk list, which already included substance use disorders, such as addiction to alcohol, opioids or cocaine.

Two comprehensive meta-analyses published in the Journal of the American Medical Association confirmed that people with serious mental illness are more at risk for severe illness from covid-19.

One study that analyzed data from seven countries found that individuals with schizophrenia were the second-likeliest group to die of covid-19, after the elderly.

Roger McIntyre, scientific advisory board chair at the Chicago-based Depression and Bipolar Support Alliance, is one of the researchers behind the other paper, which reviewed 21 studies that included more than 91 million people.

The study found a strong link between preexisting mood disorders and hospitalization and death, even when adjusting for smoking, comorbidities such as heart disease, and insecurity in health care, housing and employment, he said.

“Taken together, we’ve got reasons to be hypervigilant for people who have depression. They’ve got to get in front of the queue to get their vaccines,” said McIntyre, a professor of psychiatry at the University of Toronto.

Several experts noted that not enough is known about the biology of mental illness and covid-19 to understand why the outcomes are worse when both are present.

Anna Mendez, executive director of the nonprofit Partner for Mental Health in Charlottesville, Va., an affiliate of Mental Health America, got involved when she discovered a local shelter would accept only clients who had a condition on the CDC high-risk list. She had a client whose mood disorder made him ineligible at the time.

“If service providers in our little town are using this list to determine eligibility, it has to be happening elsewhere,” she said.

Her organization and 15 others signed a Sept. 22 letter to CDC Director Rochelle Walensky calling for an “immediate and urgent response.”

“Our organizations hope that the CDC will seize this opportunity to demonstrate that individuals with these conditions are not invisible and deserve the consideration afforded to those living with other conditions appropriately identified on the CDC’s list,” they wrote.

“This is very significant because I think it will make a tremendous difference to people who have these mental health conditions, their families and their providers,” she said.

Alexis Aplasca, chief clinical officer and the Virginia Department of Behavioral Health and Developmental Services, said the coronavirus hit people suffering with severe mental illness hard, making it the No. 1 cause of death among patients at state psychiatric hospitals over the past year.

The change could reinforce the need for vaccination, as well as infection prevention training for caregivers, which the state is expanding using federal grant dollars.

“What this tells us is we need to do a little extra work for this population and allocate resources to reach these people,” Aplasca said.

Miriam Delphin-Rittmon, the assistant secretary for mental health and substance abuse in the Department of Health and Human Services, said the change underscores the link between mental and physical health.

“CDC’s recent inclusion of certain mental health conditions that can contribute to the severity of a covid-19 infection reinforces the plight faced by Americans with behavioral health issues, including substance use disorders,” she said in a statement.

But Dailey, the head of the Arlington, Va.-based Treatment Advocacy Center, said public health officials may incorrectly think of mental health as separate from physical illness.

“It is a physical illness,” she said. “We really need a top-down approach. We need national leadership on this.”

“We basically need to figure out where this population is likely to be and address concerns they might have about the vaccine,” she said. “It isn’t rocket science.”