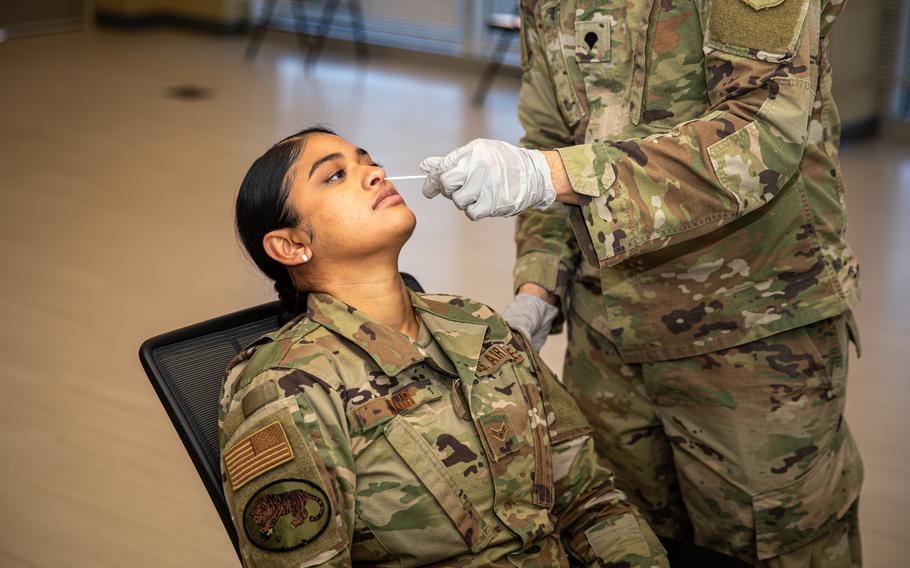 The Biden administration announced additional steps on Monday to increase the availability of rapid at-home coronavirus tests and bring down their cost.

The biggest change is a $70 million investment by the National Institutes of Health — using funds from the American Rescue Plan passed earlier this year — to help manufacturers navigate the Food and Drug Administration’s regulatory process. The NIH program aims to speed up the authorization process for new tests by helping manufacturers produce the data regulators need. It will also identify rapid tests that have the potential to be produced and distributed on a large scale.

The at-home tests could be particularly useful during what experts predict may be a bad flu season, particularly in settings such as schools, long-term care facilities and nursing homes. The tests, some of which return results within minutes, can help distinguish between flu and coronavirus - for which symptoms can be highly similar — and help ensure those most at risk, including the elderly and immunocompromised, are protected.

The administration’s efforts come just as it is expected to finalize a rule requiring businesses with more than 100 employees to mandate vaccinations for all employees or else face weekly testing. Experts have said the at-home tests could play a crucial role in the implementation of that rule for employees who opt for regular testing instead of vaccination. The rule is expected to cover 100 million employees.

“This is all extremely good news, and I love that they are expanding the validation efforts so that there won’t just be more tests, but high-quality tests,” said Gigi Gronvall, a senior scholar at the Johns Hopkins Center for Health Security. “Unfortunately, testing is one of those things that we can’t just leave up to the market to decide — things could change in the pandemic that make testing more or less a priority for individuals.”

Monday’s announcement is part of a broader administration effort to address the shortage of at-home rapid tests in the United States to help guide decisions about participating in school, work and other activities. American consumers have had far fewer such tests available than their counterparts in parts of Europe and Asia, which experts say would have been especially useful during the delta surge.

Earlier this month, the Biden administration announced it would buy $1 billion worth of such tests to address shortages, a move heralded by public health experts who said it was overdue. The White House expects that decision and the purchase of the additional tests will increase the number of at-home tests to 200 million per month by December.

The rapid tests tend to be less accurate than lab-based PCR tests, but they deliver results in real time and can be administered regularly. The at-home tests are typically around 80 percent sensitive, while lab tests are about 98 percent sensitive.

Since the administration’s $1 billion announcement on Oct. 6, the FDA has heard from more test developers who have expressed interest in bringing their tests to the U.S. market, said Jeff Shuren, director of the FDA’s Center for Devices and Radiological Health.

Shuren said some manufacturers have had challenges in evaluating their tests and that the new NIH program will “take that burden off [the manufacturers’] shoulders” and help developers better understand what data the FDA needs to sign off.

“I think this, combined with the administration now putting money into purchasing large volumes of tests, is really propping up the marketplace and leading to the U.S. becoming more attractive for developers,” Shuren said in an interview. “For those making tests in large volumes but who may not have adequate evidence, there’s the opportunity potentially for that evidence to be gathered quickly through” the NIH program.

The agency also announced it authorized an additional test from Celltrion Diatrust, marking the tenth over-the-counter test FDA has signed off on.

While experts have acknowledged the importance of boosting the availability of rapid tests, they say they are only useful in combination with other public health measures, such as vaccinations and indoor masking in areas with high transmission of the virus. The United Kingdom, for instance, has invested heavily in purchasing rapid, at-home tests so they are easily available to consumers, but still has a higher rate of coronavirus cases compared to the U.S. and other European countries. Experts say that’s likely because they have gone too far relaxing some restrictions.