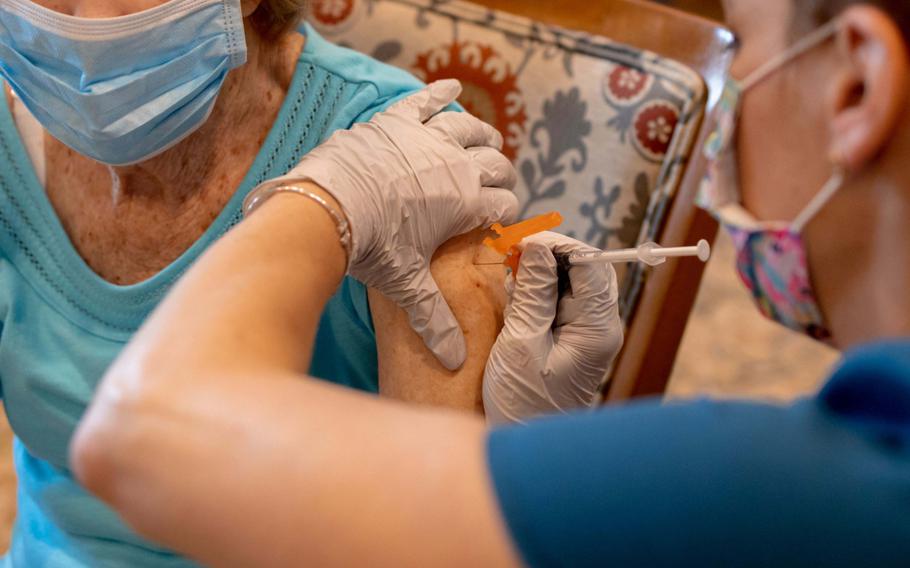 A healthcare worker administers a third dose of the Pfizer-BioNTech Covid-19 vaccine at a senior living facility in Worcester, Pa., on Aug. 25, 2021. (Hannah Beier/Bloomberg)

WASHINGTON — Millions more people in the United States will soon be able to receive an extra shot of any coronavirus vaccine, regardless of their initial vaccination — a flexibility that comes along with the authorization Wednesday of the Moderna and Johnson & Johnson booster shots by federal regulators.

The decision by the Food and Drug Administration paves the way for boosters of all three authorized shots to be available to a wide swath of the U.S. population and promises to ease the logistics of the booster campaign for pharmacies and clinics offering vaccines.

The action, arriving as the U.S. death toll from the pandemic exceeds 728,000 and tens of millions of Americans have yet to get their first shot against the virus, largely fulfills the Biden administration's controversial pledge this summer that booster shots would be widely available. That move drew criticism because it leaped ahead of decisions by scientific agencies and triggered a fierce debate about whether those extra shots were warranted now, and for whom.

The Johnson & Johnson booster was authorized for anyone 18 and over — a broad eligibility criteria reflecting the lower protection of the initial single-shot regimen when compared with other coronavirus vaccines. The Moderna booster, a half-dose of the original shot, was authorized for people 65 and older, or adults at risk of severe illness or complications because of underlying medical conditions or exposure on the job.

The booster shots could start to be given by the end of the week, pending a meeting of CDC advisers and a decision by the agency's director, Rochelle Walensky. Last month, a third shot of the Pfizer-BioNTech vaccine became available for the same at-risk population included in Moderna's authorization.

The CDC's Advisory Committee on Immunization Practices is likely to provide more detailed guidance and recommend that individuals try to get a booster of the same vaccine as their initial series, but allow for mixing and matching, according to federal health officials.

Nearly 11 million people have received a booster or an additional dose of a vaccine because they are immunocompromised.

The companies have presented data in support of their boosters, including at an expert advisory committee meeting last week. Results from a National Institutes of Health study that tested all the possible combinations of primary vaccinations and boosters informed the decision on mixing different types of vaccine.

The NIH study showed that all combinations of authorized vaccines triggered a rise in virus-fighting antibodies. But NIH data was limited, tracking doses in just 50 people per combination and following them only for a short time and measuring just one component of their immune response. It used a full dose of the Moderna vaccine, not the half-dose that will be offered as a booster.

Several scientists who worked on NIH "mix-and-match" study said it should not be used to recommend one combination over another because of limitations of the research. But it may be used that way, particularly for people who received the initial single-shot Johnson & Johnson regimen. The study found that people who initially received a Johnson & Johnson vaccine had the lowest boost to their antibodies from getting a second shot of the same vaccine — and had much higher antibody levels with either messenger RNA vaccine as a booster.

"It's really hard to say we have to look at the bigger picture" when the preliminary antibody data appear so persuasive, said John Beigel, associate director for clinical research in the Division of Microbiology and Infectious Diseases at the National Institute of Allergy and Infectious Diseases. But he cautioned that a number of other variables could emerge. Antibodies after the Johnson & Johnson vaccination could take longer to peak, for example. The available data compared antibody levels only two weeks after vaccination.

"Our study is designed to say: If [booster doses] mix, do you get a good immune response? And I think regardless of the mix you get a good response," Beigel said.

Nirav Shah, president of the Association of State and Territorial Health Officials, said the ability to use boosters regardless of what shot a person initially received would aid in the outreach effort for boosters.

"If the FDA were to authorize mixing and matching, the ability to provide boosters on the ground at the state and local level would be greatly enhanced," Shah, who is also director of Maine's Center for Disease Control and Prevention, said ahead of the FDA decision. "We have advocated for such a policy, and we would uniformly support a policy move by the FDA."

He said the data from NIH supports the immunological benefit of mixing and matching, and at the very least, showed no perceptible harm or drawback. He said the Moderna and Johnson & Johnson vaccines were given widely in remote or rural areas where the ultracold storage required for the Pfizer-BioNTech shot proved difficult.

Because Moderna and Johnson & Johnson boosters had yet to be authorized, there are "clusters where vaccine immunity has waned over time," he said. Shah said officials are hearing from residents of those rural areas who want to know more about boosters for Johnson & Johnson and Moderna "because there has been less public discussion of those vaccines than Pfizer."

The ability to mix and match boosters means that "when our teams are going into a community or a nursing facility to provide boosters, being able to carry one vaccine and give it to all who are eligible speeds up the process," Shah said.

But opening the door to any combination makes some public health leaders nervous — particularly if people at low risk for severe illness from COVID start taking different doses without clear guidance on what is recommended. One reason FDA advisers have pushed back against broadly authorizing boosters for anyone who received an initial immunization is that the benefits and risks of booster shots vary by age and demographics.

One consideration could be the specter of rare adverse events. A person at elevated risk for a rare adverse event — a woman under 50 is at higher risk of a rare clotting event after Johnson & Johnson vaccination, while a younger man is at elevated risk for myocarditis after a messenger RNA vaccine — might benefit from flexibility to consider another brand of vaccine.

"Many Americans are taking matters into their own hands. ... People are getting boosters or mixing different products through their primary care providers or by not revealing what they got before," Ofer Levy, director of the precision vaccines program at Boston Children's Hospital said at last week's FDA advisory committee meeting. "So I think it's a matter of some urgency for FDA to help sort out what is admittedly a complicated and challenging scenario. But we can't hide from it. And I do think we need to give guidance to the public."

The outsize attention to boosters could also distract from the more urgent need to emphasize delivering first dose to unvaccinated people, some health experts worry.

"We are worried that boosters will distract from the primary vaccination push," said Marcus Plescia, chief medical officer of the Association of State and Territorial Health Officials. "That is really more important in terms of controlling the pandemic."

Action on vaccines will continue to be intense in coming weeks. The FDA is scheduled to meet with its outside advisers Tuesday to discuss the Pfizer-BioNTech vaccine for children 5 to 11, with an emergency authorization expected by early next month.

And federal regulators are seriously considering authorizing booster shots for people as young as 40, according to two federal officials familiar with the plans. That action would not occur until after the pediatric vaccine is authorized, said the officials, who spoke on the condition of anonymity because they were not authorized to discuss the issue.

Senior federal health officials have been eager to lower the eligibility age for booster shots because of concerns that some middle-aged people are becoming ill with COVID-19 despite being fully vaccinated. Israeli data suggests that extra shots can help prevent serious illness among that population.