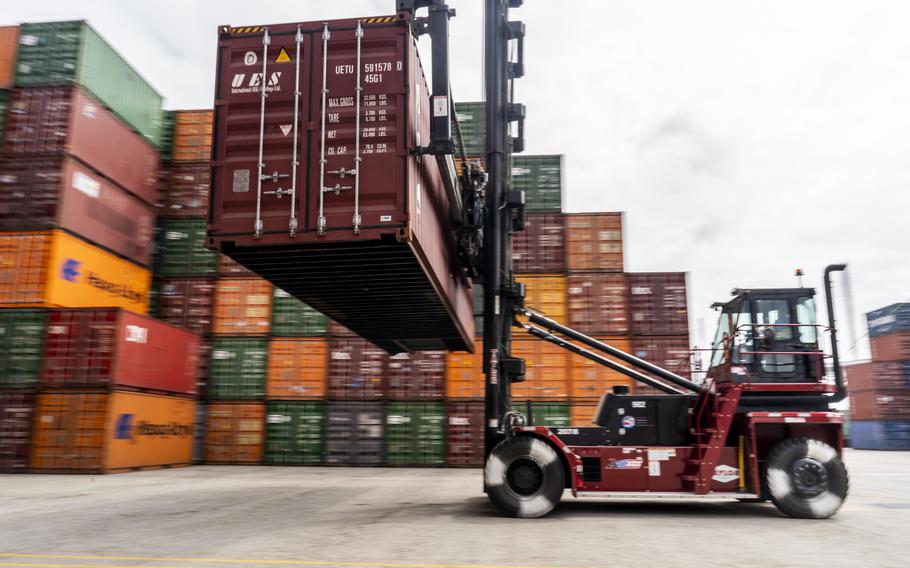 Containers are moved around at the Port of Los Angeles recently. (Melina Mara/The Washington Post)

Stuck at home — and now, accustomed to being stuck at home — Americans are buying too much stuff. But factories are still struggling to produce and deliver amid the pandemic: There aren't enough people and parts to make stuff, enough ships to get it across the seas, enough port workers to unload it, enough space in ports to store it, enough truck drivers and railroad workers to transport it, enough warehouse workers taking jobs to sort it — and no one really knows how long this backup will last or how to fix it.

That's the very complex global-supply-chain problem, in a paragraph. It means the world is facing a backlog of goods never seen before in the modern economy, right before the holiday season. That is manifesting in months-long delays, empty shelves and higher prices.

The nexus of the global economy and American politics has become clearer: If people don't get their gifts in time, voters could blame President Joe Biden and his party for it.

A little more about what's going on

Most economists agree that the pandemic is the driving force behind all this. The world is nowhere near being fully vaccinated against the coronavirus, and that means factories in, say, Vietnam are still having trouble keeping up with demand as workers keep getting sick, or ports in China are having to shut down because of infections. In addition, there's a worker shortage in the United States.

"We are opening up a global economy all at once," said economist Diane Swonk. "You're going to get problems. It is much easier to turn the lights off in a factory than turn them back on again."

That's created a backlog in manufacturing and shipping goods, and economists we talked to don't think it's going away any time soon. An added problem is that there just aren't enough containers in the world right now to get things back to normal.

"This backlog really reflects the fact that we have a lot more volatility in the world," said Betsey Stevenson, an economist who advised President Barack Obama. "You might be at a factory in another country, somebody gets COVID, and it shuts down for two weeks. That puts all your orders behind. Now, does the container ship it's supposed to go on wait for your orders? And then we see container ships stuck in the wrong ports. ... There is a giant logistics crisis going on."

The United States is helping drive this problem as the largest economy in the world. Amid all the delivery woes, Americans' product demands are shifting — bye-bye, skinny jeans and plastic toys; hello, home gyms — and manufacturers have to pivot. 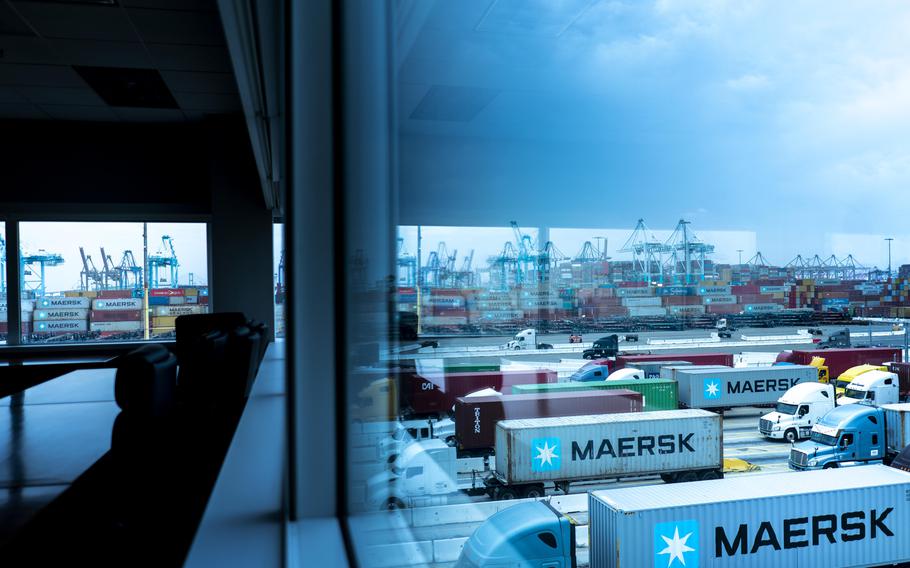 Trucks enter the Port of Los Angeles in September to move goods across the country, but this major port is severely backlogged as a result of a snarled global supply chain, creating a potential political headache for President Biden. (Melina Mara/The Washington Post)

How this supply chain backlog is causing economic problems for Americans

The Federal Reserve says this is all contributing to inflation lasting longer than it otherwise would, and some prominent economists have lowered their forecast for growth in the United States — right as the delta variant is subsiding and public health experts are cautiously hopeful the worst is over, report The Washington Post's David Lynch and Rachel Siegel.

And that means two things Americans hate: longer waits for products and higher prices once they finally arrive in stores.

How the supply chain backlog is causing political problems for Biden

Voters blame presidents for all sorts of pocketbook problems that presidents can't fix, like high gasoline prices (which are also happening right now).

Biden is trying to get out in front of it all. He appointed a port envoy. He held a meeting Wednesday with labor and business groups and announced that the Port of Los Angeles will start operating 24 hours a day to get goods out of containers and into trucks on highways.

He knows this is going to matter for the midterm elections, Stevenson said. Americans rate the economy as an important issue, right up there with the coronavirus, according to an August NBC News poll, which also showed that Americans were largely pessimistic about the economy — even before these supply chain issues really started getting attention.

"People don't like volatility and they definitely don't like not being able to get what they want," she said. "So I do think it is a political problem, and I do think Biden has to solve it."

Republicans are trying to pin this on Biden, too. Talking about the backlogs ties in nicely with their arguments that Democrats in Congress are big spenders and thus causing prices to go up. 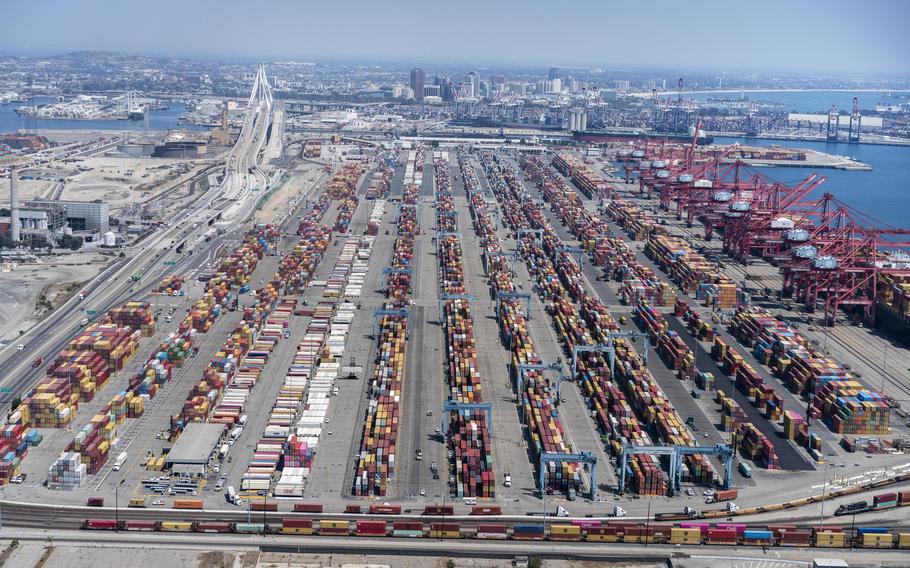 But Biden doesn't have much control over the global supply chain

There are much bigger economic forces at work than one president can wrangle, said Phil Levy, an economist who advised George W. Bush.

Many economists favor lifting the Trump-era tariffs on China to ease international trade, a move Biden has so far resisted. But overall, this is a private-sector problem, and as Lynch points out in his extensive reporting on this, no one knows how to unclog it.

Biden is trying to pressure American companies to at least fix the short-term backlog. On Wednesday, he lauded Walmart and other major retailers, as well as FedEx and UPS, for their efforts to start moving goods overnight, at their own expense.

"For the positive impact to be felt all across the country and by all of you at home," Biden said, "we need major retailers who ordered the goods and the freight movers who take the goods from the ships to factories to the stores to step up as well."

Long-term, Congress has appropriated billions to expand ports in the bipartisan infrastructure bill. But that bill is being held up by liberal Democrats as leverage for another bill.

Biden also needs to be careful how he talks about this. While White House officials want to set expectations that Americans may not get all their Christmas gifts on time, they don't want to cause them go out and panic-buy everything.

"That will create its own supply problem," Stevenson said, "because there really will be empty shelves. One of the things Biden has to do is convince people that everything is under control, and we will have enough toilet paper and turkeys, and you will be able to buy what you want this holiday season."