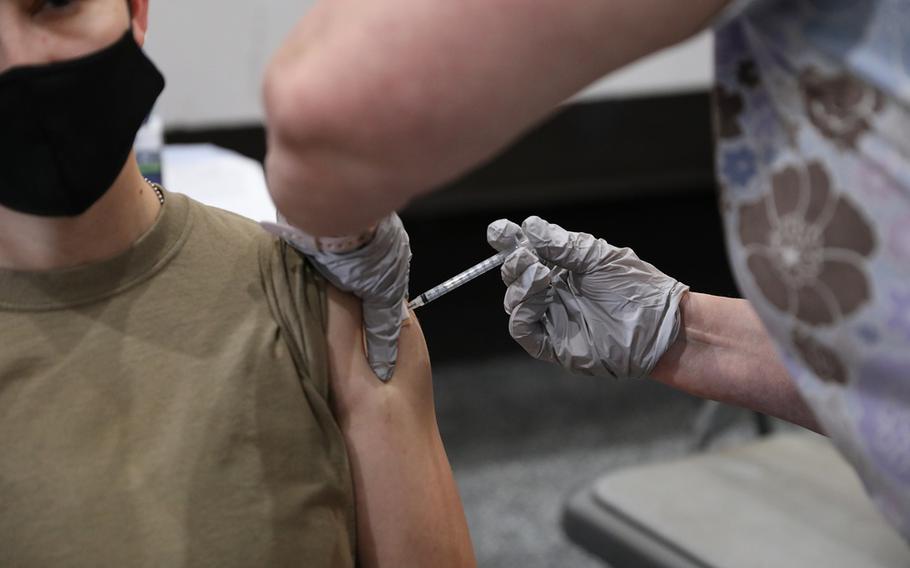 The facility will not have an immediate impact on the coronavirus pandemic because it will take two to four years to build. The announcement comes as Moderna faces public protests from health-care advocates and behind-the-scenes pressure from the Biden administration to increase manufacturing capacity and share more doses of its coronavirus vaccine with the world. (Maxwell Bass)

Biotechnology company Moderna, under intense pressure to send more of its coronavirus vaccine to lower-income countries, announced Thursday it would build a manufacturing plant in Africa capable of producing 500 million doses of messenger RNA vaccines a year.

The facility will not have an immediate impact on the coronavirus pandemic because it will take two to four years to build. The announcement comes as Moderna faces public protests from health-care advocates and behind-the-scenes pressure from the Biden administration to increase manufacturing capacity and share more doses of its coronavirus vaccine with the world.

“We played a lot of scenarios over the last couple of months and decided we should do something big in Africa. The only way to do it right, if you take a 5-to-10-year view, was to build our own plant like we’ve done in America, so that’s exactly the model,” Moderna chief executive Stéphane Bancel said in an interview.

Creating manufacturing capabilities in underserved areas of the world has become a major goal for public health advocates amid stark inequities in global access to coronavirus vaccines. A recent Kaiser Family Foundation analysis found that nearly two-thirds of people in wealthy countries have received at least one dose of a vaccine, compared with 2% in low-income countries.

A senior Biden administration official, who spoke on the condition of anonymity because they were not authorized to speak about the discussions, said the administration has been pressuring Moderna for months to increase its output and send doses to lower-income countries. Moderna partnered with the National Institute of Allergy and Infectious Diseases to invent its vaccine, and the U.S. government gave Moderna billions of taxpayer dollars to underwrite research and development of the vaccines, and for purchase of doses.

“We look forward to seeing exactly what they will do,” the official said. “We are in intense discussions to expand capacity to increase the number of doses they are providing to low- and middle-income countries in the shorter term.”

Moving manufacturing into less-wealthy countries is one possible solution to the lack of global supply, but many advocates favor transferring the technology to local companies to ensure that countries have the ability to respond to new threats and to ensure their doses do not end up exported elsewhere in the world.

“There’s this monopolistic grip of a few countries that really controls the narrative, and the availability and the access of lifesaving medical resources - and there’s enormous global resentment about that,” said Lawrence Gostin, a global health law expert at Georgetown Law. “Donations always seem to come too late, and be insufficient. . . . Opening up manufacturing plants in other countries is certainly a step forward, but it doesn’t really change the dynamic.”

Bancel said the company has not decided where the factory will be, but that the doses made there would remain in Africa, and Moderna would recruit and train a local workforce. He said the factory would manufacture the mRNA that goes into the vaccines and encase it in the protective lipid bubble that delivers the vaccine and keeps it stable. He said details were still being worked out about where the vaccines would go into vials.

Moderna has a large pipeline of mRNA vaccines in development beyond covid-19, including to protect against respiratory viruses, tropical viruses and HIV.

“We really want to get all the know-how and so on in Africa, so they can make vaccines, if there is an Ebola outbreak, they can use the plant for things like that,” Bancel said.

Gostin said building plants in lower-income countries was a step forward but emphasized that local control, ownership and expertise matters. He drew a comparison to China’s “belt and road initiative” in which the Chinese government built infrastructure in other countries.

University of Pennsylvania researcher Drew Weissman, one of the scientists whose work undergirds the coronavirus vaccines, has worked with Thailand to help design a mRNA vaccine.

GreenLight Biosciences, a start-up company that has been making mRNA for agricultural applications, is working toward making mRNA vaccines with a different manufacturing process that could be easier to scale up. GreenLight plans to launch a clinical trial in Africa next year.