For many families, the countdown has begun to coronavirus vaccines for younger children 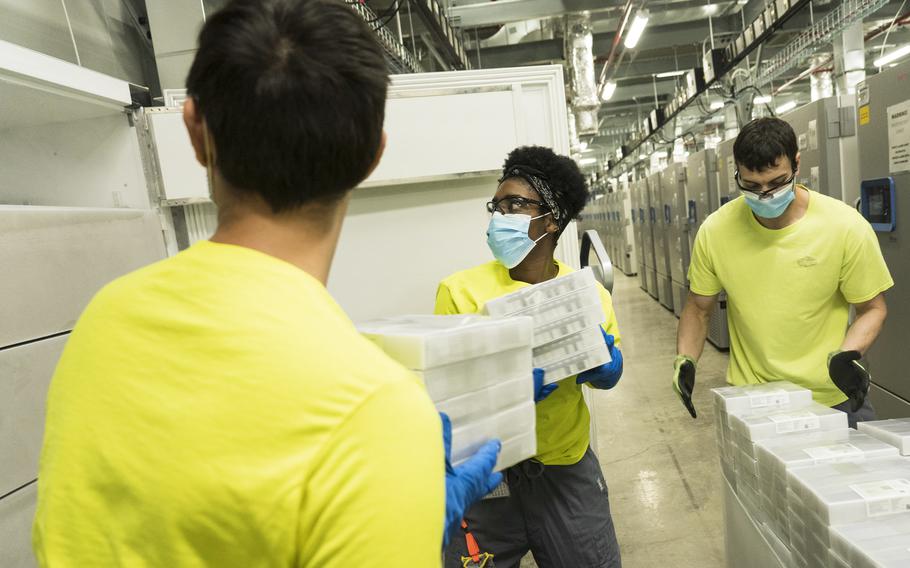 For almost a year, Whitney Kuhn has been trying to escape the grip of long-haul symptoms after contracting COVID-19. And she has not stopped worrying about how to protect her 10-year-old son, Tyler, from the illness she experienced.

She has been too anxious to go on family vacations, visit relatives for the holidays or even take Tyler to the grocery store. She has pulled him from basketball — his favorite sport — and other extracurriculars. And when he had to return to school, she could only hope his classmates wore their masks the right way.

The stay-at-home mom and trained nurse from Pinehurst, N.C., said her head has been on a swivel, alert to every cough and sneeze: "'Are you feeling okay? Do you have a headache? Can you smell your food?' I try to be a little more surreptitious about it so it doesn't scare him, but I do watch him."

For many parents, hope appeared on the horizon last week. Pfizer-BioNTech reported that clinical trial data showed their vaccine was safe and effective in children ages 5 to 11 — a much-anticipated announcement that left many parents heartened at the prospect of finally being able to vaccinate their children against the virus.

The Pfizer-BioNTech data has not yet been peer-reviewed or published but is expected to be submitted to the Food and Drug Administration by the end of September. And, pending regulatory approval, the vaccine could be available for younger children in time for Halloween.

In anticipation, Kuhn, 45, has already signed up her son for winter basketball. "I can't tell you how that felt," she said. "I wanted to cry thinking about it — happy tears, not sad tears."

Her sentiment is shared widely by parents, according to more than half-a-dozen pediatricians. While some parents have refused to even discuss vaccinating their younger children, most seem eager to get their kids immunized so they can reclaim some semblance of a normal life, the doctors said.

But many of those parents are also frustrated and exhausted.

Throughout the pandemic, "they've been paralyzed," said Ari Brown, a pediatrician in Austin. She said many parents in her practice have been making family plans around children who are too young to be vaccinated, trying to mitigate the risk to their youngest. Now, with the holidays looming, she said, they want to vaccinate their kids so they can spend Thanksgiving, Christmas and other holidays with family.

"Those are the emotions people are expressing," Brown said.

Although the coronavirus does not typically cause serious illness in children, they still are at risk. More than 5.5 million youngsters in the United States have been diagnosed with COVID-19, the illness caused by the coronavirus, since the start of the pandemic, resulting in tens of thousands of hospitalizations and at least 480 deaths. In addition, more than 4,600 have suffered a rare but serious condition called multisystem inflammatory syndrome — known as MIS-C — which is associated with COVID-19 and can cause inflammation of the heart, lungs, kidneys, brain and other organs.

"To me, low risk is not the same thing as no risk," Kuhn said.

Following Pfizer's announcement, pediatricians said they received phone calls and emails from parents wanting to know when the vaccine would be available and whether they could be put on a notification list. One doctor said her receptionists were "real tired" after working the phones.

But, several doctors added, parents have been asking questions for months — whether the vaccine is safe, whether their pediatrician would recommend it, when it would be available for younger children.

They said some parents have begged for the vaccine for children younger than 12, even though they know it is not yet permitted.

"There are the folks saying, 'Please, please, please give my kid the vaccine. Drop one on the floor. Don't tell anybody,'" said Christoph Diasio, a pediatrician in Southern Pines, N.C.

Diasio and other physicians said they explain to parents they are not authorized to bend the rules, but they understand the desperation.

Pediatrician Suzanne Berman, a mother to a 6- and 9-year-old, said she cannot wait to vaccinate her children. When the vaccine becomes available for her children, she said, "I will be the first in line at my own office" in Crossville, Tenn., to give them the first shot.

As children have headed back to school amid the rise of the delta variant, one pediatrician said parents in her practice have had fewer questions about the safety and efficacy of the vaccine and more questions about the timeline for their younger children. Given the availability of the vaccine for adolescents and teenagers, "they can see firsthand how safe the vaccine is," said pediatrician Katherine Williamson, who practices in Orange County, Calif.

"The other thing, too, is the delta variant contagiousness is becoming a reality as kids are starting school, and it's becoming more and more obvious that every child within the next couple of months will be exposed to COVID-19," Williamson said. "And I think parents know the vaccines are the best way to protect their kids."

Some pediatricians have even been vaccinating parents and grandparents, "because that's part of how you protect the younger kids — you vaccinate the older people," Diasio said. He said health care professionals in his practice have administered about 4,500 coronavirus vaccines, about 30 percent of which have gone to older adults.

Among pro-vaccination parents, the pressure to act may be even greater in states such as Texas, where Republican Gov. Greg Abbott has signed an executive order prohibiting schools from mandating masks.

"That's putting even more pressure on families to do what they can do to protect their young kids," said Stanley W. Spinner, chief medical officer and vice president of Texas Children's Pediatrics and Texas Children's Urgent Care.

So, Spinner said, once the vaccine is authorized for younger children, "I expect that there'll be a pretty quick push for getting these kids in and getting them vaccinated" by parents who have been waiting.

In Tennessee, Berman, who is chair of the American Academy of Pediatrics' Section on Administration and Practice Management, has encountered both strong enthusiasm and unwavering resistance to the vaccine. She said some skeptics have refused all routine vaccines for their children "because they're afraid we're going to slip them a COVID vaccine without their consent."

Others, she said, have hung up on health care workers in her office and left the practice after doctors tried to make the case for the shots.

At his practice in North Carolina, Diasio said the most common concern he has heard from parents is that the messenger-RNA technology used in the Pfizer-BioNTech vaccine is too new.

He reassures parents that hundreds of millions of doses of the vaccine have been given in the United States, and more than a billion worldwide.

He said he also points out the mRNA vaccine was decades in the making and tells families the basic research underlying the vaccine technology "is older than Taylor Swift."