Hospitals overwhelmed by COVID are turning to ‘crisis standards of care.’ What does that mean? 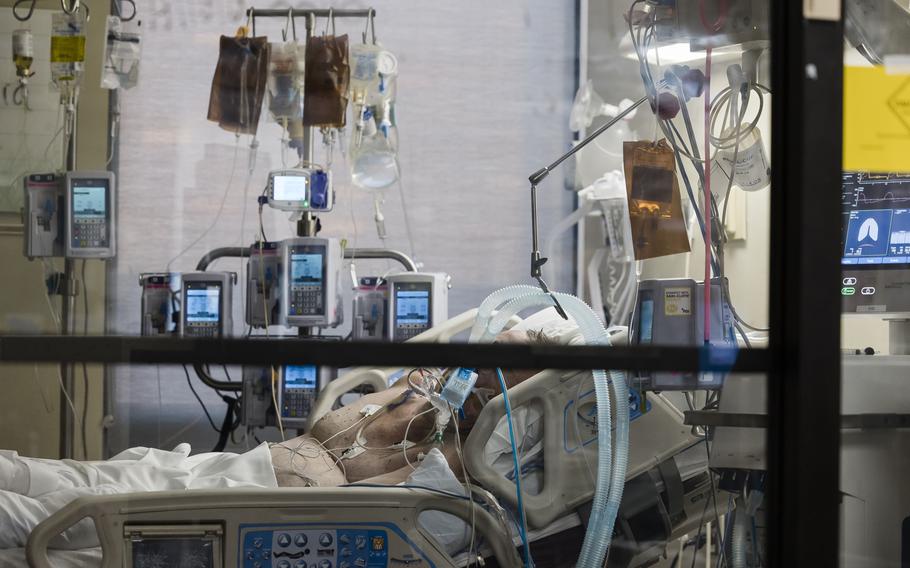 An intubated patient inside a negative pressure room in the COVID-19 ICU at a hospital in Joplin, Mo., on Aug. 3. (Angus Mordant/Bloomberg)

Long-feared rationing of medical care has become a reality in some parts of the United States as the delta variant drives a new wave of coronavirus cases, pushing hospitals to the brink.

Idaho last week activated statewide crisis standards of care, in which health systems can prioritize patients for scarce resources — based largely on their likelihood of survival — and even deny treatment. The decisions affect COVID and non-COVID patients. Some hospitals in Montana and Alaska have turned to crisis standards as well, while Hawaii's governor this month released health workers from liability if they have to ration care.

Some states have no crisis standards of care plans, while others just created them during the pandemic. The common goal: Give health care workers last-resort guidance to make potentially wrenching decisions. But people disagree on the best calculus.

"We only end up needing crisis standards of care when our other systems have utterly failed," said Emily Cleveland Manchanda, an assistant professor of emergency medicine at Boston University School of Medicine.

Q: What do "crisis standards of care" look like?

A: The emergency room at Providence Alaska Medical Center in Anchorage was so packed recently that patients waited in their cars for care. Physician Kristen Solana Walkinshaw told The Washington Post last week that her team had four patients who needed continuous kidney dialysis and only two machines available.

In Idaho, health officials said, crisis care standards may mean that patients end up treated in hallways or tents. Elective and urgent surgeries have been delayed at one hospital. There may be fewer nurses and doctors caring for more people. Patients may wait hours to get what they need to have to transfer to another hospital far away — though health leaders caution that neighboring states are struggling with an influx of coronavirus cases, too.

The resource crunch could also force health care workers to give beds or ventilators to those most likely to recover. If resources become extremely tight, they can consider universal do-not-resuscitate orders for hospitalized adult patients who go into cardiac arrest.

"Your care will be affected," Idaho's health department warned on Facebook.

Not all hospitals may need to ration treatment, but they have a greenlight from authorities. Officials are also sending a statewide message.

"By announcing crisis standards of care going into effect, you're also in essence saying to your population, if you're a governor or a public health figure: 'We're in an emergency. Take heed, take warning,'" said Jacob Appel, an associate professor of psychiatry and medical education at the Icahn School of Medicine at Mount Sinai in New York.

Q: How are patients prioritized?

A: Hospitals typically operate on a first come, first served basis. In a crisis — a hurricane, a mass shooting or a multicar crash, for example, as well as a pandemic surge — they must triage by prioritizing some patients over others to save the most lives.

Different plans take different approaches, but there are common themes. Most typically start by scoring the health of major organs such as the brain, heart, kidney and liver. They may take into account people's chances of recovery, their life expectancy and even their "essential worker" status.

"Exclusion criteria" can instruct health care workers to withhold care from certain groups — patients in cardiac arrest, for instance, or those with severe dementia. Then others are ranked with scoring systems and sometimes a series of "tiebreakers."

Doctors ask: How badly are patients' organs failing? Do they have other diseases such as cancer, Alzheimer's, or kidney damage requiring dialysis? Some plans also give priority to those who are pregnant, younger people or badly needed health care staff. Patients are typically evaluated throughout their stay in the hospital to check if their priority should change.

Most state plans say that the doctor directly caring for a patient should not be making the call on what limited resources that person gets, according to an academic review of plans published last year. Some lay out an appeals process.

Q: What parts of the crisis plans are most controversial?

A: Disability rights groups have filed complaints about crisis standards of care that they argue amount to illegal discrimination, and others have raised concerns about discrimination against the elderly.

"Using the categories of age to determine whether someone receives care is wrong. Plain and simple," AARP Idaho State Director Lupe Wissel wrote in a recent post criticizing Idaho's decision to make age a "tiebreaker" for limited resources. "The estimation of potential 'life years' an individual has does not equate to the value of a life."

Scholars also worry that crisis standards of care will feed into long-standing inequalities in access to health care, because scoring systems are allocating resources based partly on health conditions that disproportionately afflict certain groups. Black Americans, for instance, are much more likely than white Americans to have kidney disease.

Some crisis plans try to counteract these deep-rooted racial disparities: Massachusetts's scoring system limits penalty points for a history of poor kidney function, Cleveland Manchanda said. One paper in the medical journal JAMA Network Open, which examined more than 1,000 patients hospitalized last year in Miami, found that crisis standards of care policies did not seem to discriminate based on race or ethnicity.

The idea of factoring in coronavirus vaccination status has drawn particular backlash from the public. A critical care task force in Texas floated the concept last month — but the authors dismissed it as a theoretical exercise after an uproar.

Q: Where have crisis standards of care been used?

A: Arizona and New Mexico were the only states to declare crisis standards of care earlier in the pandemic, according to an August paper published by the National Academy of Medicine.

But experts note there is more to the story. Resources have been rationed without any official shift to crisis standards.

As a winter coronavirus surge slammed Los Angeles, for instance, ambulance crews were instructed to save oxygen and to treat patients on the scene rather than bring them to the hospital when they had little hope of survival.

"[Some] areas that were clearly in crisis related to ventilators, oxygen, or other resources, where painful triage decisions had to be made, never received a formal declaration authorizing [crisis standards of care]," the National Academy of Medicine paper says, attributing the phenomenon in part to "political concerns."

In Arizona and New Mexico, meanwhile, health care facilities did not apparently end up rationing ventilators despite the state declarations, the paper said.

Q: Are there any national guidelines for crisis standards?

A: The 2009 H1N1 flu pandemic prompted a nationwide push to create clear plans for divvying up medical resources in times of overwhelming need. Federal officials asked the health arm of the National Academy of Sciences to craft guidelines.

But crisis standards of care vary widely by state.

More than half of states had explicit plans last year, though some of those leave key questions to hospitals, researchers found. And more than a dozen of those states' crisis standards of care were crafted or updated in 2020, the researchers wrote. Idaho's policy was still in the works as the scholars did their survey.

Arkansas is finalizing a COVID-19-specific crisis standards of care policy, said Jerrilyn Jones, the state health department's medical director for the health preparedness and response branch. The state also wants a more general policy, but Jones noted that those can take years to develop.

"As with all disaster planning, people don't really think about the need for such things until it hits you in the face," she said in an interview.

For now, hospitals have their own plans, Jones said. She said she has not heard of people in Arkansas being turned away from care, though some places have tried to conserve resources by halting elective surgeries.

The statewide guidance under development will still leave much of the decision-making to local institutions. Jones emphasized that each hospital's situation is different.

"I don't think it would be appropriate for us as a state to dictate what is happening at the bedside," she said.

The Washington Post's Ariana Eunjung Cha and Meryl Kornfield contributed to this report.