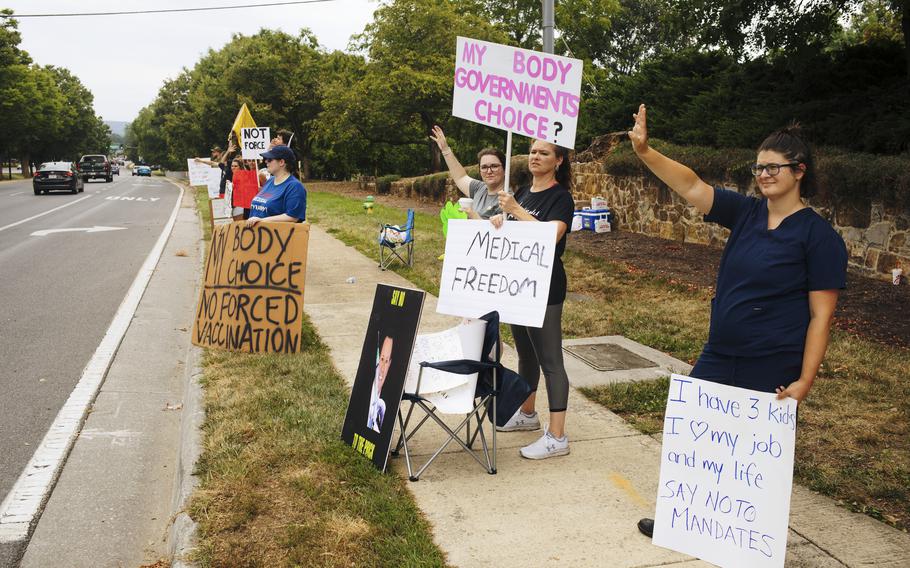 WASHINGTON — The delta variant's two-month surge has generated a sharp rise in public fears about contracting the coronavirus, undermined confidence in President Joe Biden's leadership and renewed divisions over vaccine and mask mandates, according to a Washington Post-ABC News poll.

Nearly half of Americans, 47%, rate their risk of getting sick from the coronavirus as moderate or high, up 18 percentage points from late June. This follows a more than tenfold increase in daily infections. Concerns over catching the virus among partially or fully vaccinated adults have risen from 32% to 52%, while concern among unvaccinated adults has grown from 22% to 35% over the same period.

Those shifts parallel a rebound in vaccinations, with the share of adults with at least one coronavirus shot rising from 67% on in early July to 75% as of Saturday, according to the Centers for Disease Control and Prevention. The poll finds younger Republicans and Republican-leaning independents have become more willing to get vaccinated since this spring, a significant shift for one of the country's most vaccine-hesitant groups.

The increasing number of employer mandates may boost vaccination further, but the poll also shows potential for blowback. Among unvaccinated workers who are not self-employed, about 7 in 10 say they would likely quit if their employer required them to be vaccinated and did not grant a medical or religious exemption.

President Biden's approval rating for handling the pandemic has dropped to 52% from 62% in late June, days before he said the nation was "closer than ever to declaring our independence from a deadly virus." At the time and as the variant has spread, he has repeatedly implored Americans to get vaccinated and wear masks.

Biden's overall approval rating fell from 50% to 44% from June, also dragged down by 2-to-1 disapproval for his handling of Afghanistan following a chaotic withdrawal. Biden's ratings for handling the economy also have declined, from 52% positive in April to 45% in the latest survey.

Employee vaccine mandates are expected to be a major flash point in the months ahead, with thousands of private employers as well as the federal government and U.S. military newly imposing vaccination requirements on workers. This trend accelerated after the Food and Drug Administration recently gave full approval to the Pfizer-BioNTech coronavirus vaccine, which had been operating under an emergency use authorization.

The Post-ABC poll finds 52% of Americans support businesses requiring employees who come into work to be vaccinated, with support dipping to 47% among workers who are not self-employed. Roughly 8 in 10 Democrats support vaccine mandates for workers, while more than 6 in 10 Republicans are opposed. Independents are divided nearly down the middle.

Vaccine and mask requirements in schools have also generated fierce divisions as the academic year begins, and the Post-ABC poll finds public support depending on circumstances as well as by partisan viewpoint. Two-thirds of Americans overall, as well as public school parents, support school districts requiring teachers, staff and students to wear masks.

The CDC has recommended this practice, but nine Republican-led states have tried to ban such requirements. The poll finds that more than 9 in 10 Democrats and more than 6 in 10 independents support school mask requirements, while nearly 6 in 10 Republicans oppose them.

The Post-ABC poll suggests vaccine hesitancy has declined substantially from early in the year, and that there is still some room for the nation's vaccination rate to grow above the current level of three-quarters of adults. The survey finds that 6% of adults are unvaccinated but say they definitely or probably will get vaccinated. And while 17% of adults say they probably or definitely will not get vaccinated, that group has declined from 32% in January and 24% in April.

The current Post-ABC poll was weighted by demographics and also by the latest CDC estimate for the share of adults who have received at least one coronavirus shot. Previous surveys did not include this adjustment, although the poll's findings of increasing concern about contracting the virus and reduced vaccine hesitancy are consistent regardless of whether the adjustment is applied.

Perceptions of vaccine safety and effectiveness are critical predictors of behavior, and unvaccinated Americans hold widespread doubts about the coronavirus vaccines on both fronts.

The FDA and the CDC have said the vaccines are safe, and the percentage of unvaccinated people hospitalized with COVID-19 is far higher than the percentage of those who are vaccinated. Still, more than 7 in 10 unvaccinated adults say they are not confident the vaccines are safe and a similar majority lack confidence that they are effective in preventing serious illness and death from the coronavirus.

And while concerns about becoming infected have risen since June, 6 in 10 unvaccinated Americans say they are at "low risk" or "no risk" of getting sick from the coronavirus, a view that has stymied public health officials' efforts to convince people of the benefits of getting vaccinated.

Roughly 6 in 10 unvaccinated adults say the information they've heard and read about the coronavirus vaccines has not swayed them for or against it, but notably just 4% say they've heard information that moves them toward vaccination, while 33% say they heard things that moved them against getting vaccinated. Similarly, 16% of unvaccinated people say the FDA's approval of the Pfizer vaccine makes them more likely to get a shot, while 82% say it makes no difference.

In one notable shift, younger Republicans and Republican-leaning independents have become significantly more willing to get vaccinated since this spring. In April, a 55% majority of Republican-leaning adults under 40 said they would probably or definitely not get vaccinated. With the delta variant now circulating widely, the latest poll finds that hesitancy falling to 36% among young Republicans, with 48% of those under 40 saying they have gotten at least one shot and another 11% saying they are likely to do so.

Among Republicans and Republican leaners overall, hesitancy has declined from 40% in April to 29% in early September, with 61% at least partially vaccinated. By comparison, 90% of Democrats and Democratic-leaning independents say they have received at least one vaccination.

The Post-ABC poll was conducted by telephone Aug. 29-Sept. 1 among a random national sample of 1,006 adults, with 75% reached on cellphone and 25% on landline. Overall results have a margin of error of plus or minus 3.5 percentage points. The error margin is 5.5 points for results among the sample of 474 workers who are not self-employed and 7.5 points among the sample of 229 public school parents.