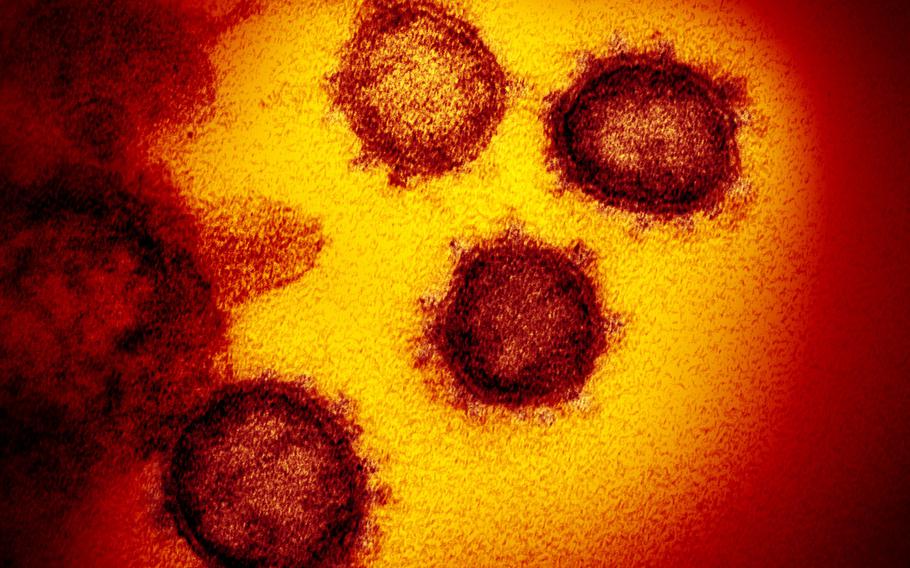 An image from an electron microscope shows SARS-CoV-2, the virus that causes COVID-19. (NIAID-RML/Zuma Press/TNS)

(Tribune News Service) — The mu coronavirus variant has been marked as a “variant of interest” by the World Health Organization and has spread across Chile, Peru and parts of the U.S. and Europe.

The mu variant is the fifth one of interest currently being monitored by the organization. Stuart Ray, a professor of medicine at John Hopkins University, said the variant accounts for most cases in Colombian, Chile and Peru, but only some cases in the U.S. as of right now.

The mu variant was first detected in January 2021 in Colombia and has since spread to parts of South Korea, Canada, Europe and Japan, according to the WHO.

In the U.S., the variant accounts for about 2,000 cases as of Friday,according to the Global Initiative on Sharing All Influenza Data. The states with the highest mu variant cases are California, Florida, Texas and New York.

As of now, Ray said what’s concerning is mu obtains similarities to deadlier variants such as the delta variant, which is the cause of over 99% of cases in the U.S.

Top infectious-disease expert Anthony S. Fauci told a press briefing on Thursday that the government was “keeping a very close eye on it.” However, he confirmed the dominant and most concerning variant remains the delta strand.

Ray said as of now it’s highly unlikely the mu variant and other variants will surpass the delta variant cases.

“It’s still early and difficult to measure how infectious and how effective the mu variant is. But the world is a small place during the pandemic so we’re staying vigilant,” Ray told USA TODAY.

In South America and South Korea, Ray said the varying COVID-19 vaccines have been effective in protecting people from serious illness against the mu variant. Fauci said in the press briefing that the variant can surpass certain antibodies but there is still a lack of research.

In Colombia and Peru, Ray said the variant has shown “high rates of transmissibility” but there’s no reason for concern in the U.S. yet.

Until more cases or research on the mu variant is released, Ray urged Americans to continue to wear masks and get vaccinated.

“Certain features in coronavirus variants appear to make the virus more infectious and we are seeing some of those features in the mu variant,” Ray said. “But right now, we don’t have any huge concerns.”