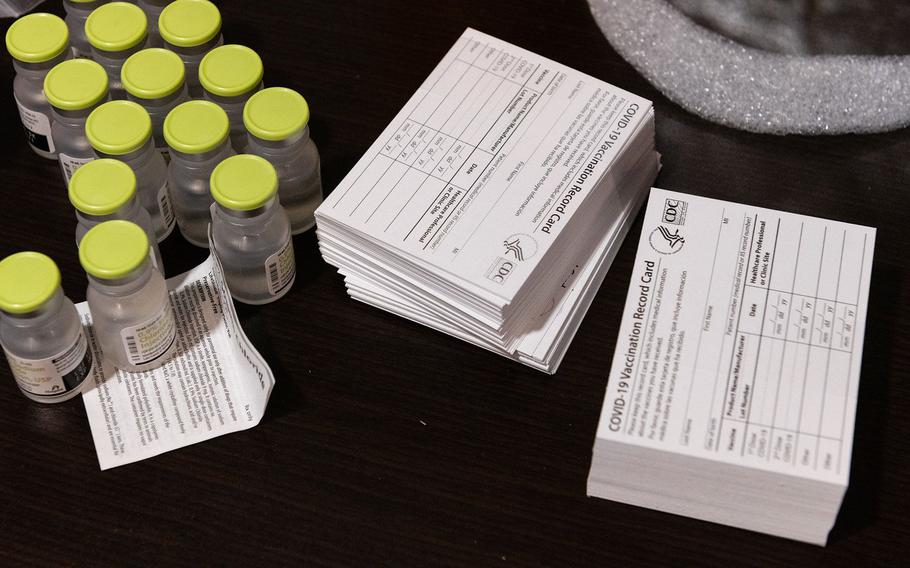 Vials of Sodium Chloride sit next to Covid-19 vaccination record cards at a nursing home in the New York borough of Brooklyn on Jan. 5, 2021. (Eric Lee/Bloomberg)

New York Gov. Kathy Hochul said her administration is working toward mandating COVID vaccines or weekly testing for all school staff on top of a mandatory mask mandate she imposed last week.

During her first public COVID-19 briefing since she was sworn in last week, Hochul on Tuesday also said she would "explore all options" to expand mandatory vaccines with no test-outs for all state-run congregate facilities.

"As much as I'm an optimist, and we all thought we'd be turning the page on anything related to the pandemic certainly by this time, we have not. The battle rages," Hochul said.

Hochul, a Democrat, said she can't simply impose a mandate because she lacks the same emergency powers afforded to former governor Andrew Cuomo, who stepped down last week over sexual harassment allegations.

"We're in the process for getting the legal clearance for that as I speak," she said. "I don't have the same executive powers that were put in place last year but if I did, sure as I'm standing here I would mandate it."

She also pledged to refrain from imposing state mandates on cities and localities without consulting with them first. She said any mandates she imposes won't be open-ended and could be changed if conditions permit.

In that vein, she said she would allocate $65 million for local communities to set up facilities to administer COVID booster shots when they are approved. The Biden administration said it wants to start administering boosters on Sept. 20, though the plan has not yet been approved by the Food and Drug Administration.

Hochul's press conference marked a divergence from the showy events New Yorkers became accustomed to under Cuomo. The three-term Democrat gained national notoriety for his daily COVID-19 briefings at the onset of the pandemic, which mixed dark humor with his signature tough-guy attitude. But Cuomo also drew ire from local leaders, including New York City Mayor Bill de Blasio, for overstepping his authority.

Hochul has also promised to be more transparent than the previous Cuomo administration in all aspects, including how coronavirus cases are reported. On her first day in office her administration updated the state's COVID database to also include the official COVID death tally from the U.S. Centers for Disease Control and Prevention in addition to the previously reported state numbers. The move acknowledged an additional 12,000 COVID-19 deaths in the state.

When 70% of adult New Yorkers had at least one COVID shot in June, Cuomo lifted many of the coronavirus restrictions. But Hochul said the rise of the highly contagious delta variant has led to the state considering whether to revisit some of those previous measures.

"Hospitals are filled up with the unvaccinated," she said.

Currently New Yorkers are required to socially distance and wear a mask on all public transportation and at professional sports events. Attendees at large concerts and professional sporting events must provide proof they are fully vaccinated or have recently tested negative for COVID-19.

After taking office, Hochul promised to quickly release "concise and consistent" policies for schools and announced she would institute a universal mask mandate for anyone entering schools in the state.

The New York State Department of Health on Friday filed an emergency regulation which requires students, faculty and staff of all public and private schools to wear masks inside school buildings.

Hochul also told New Yorkers that they can expect more stringent vaccine requirements now that the Food and Drug Administration has fully approved the Pfizer vaccine. She said she is "prepared to do whatever is necessary" to ensure the state is ready to distribute booster shots.