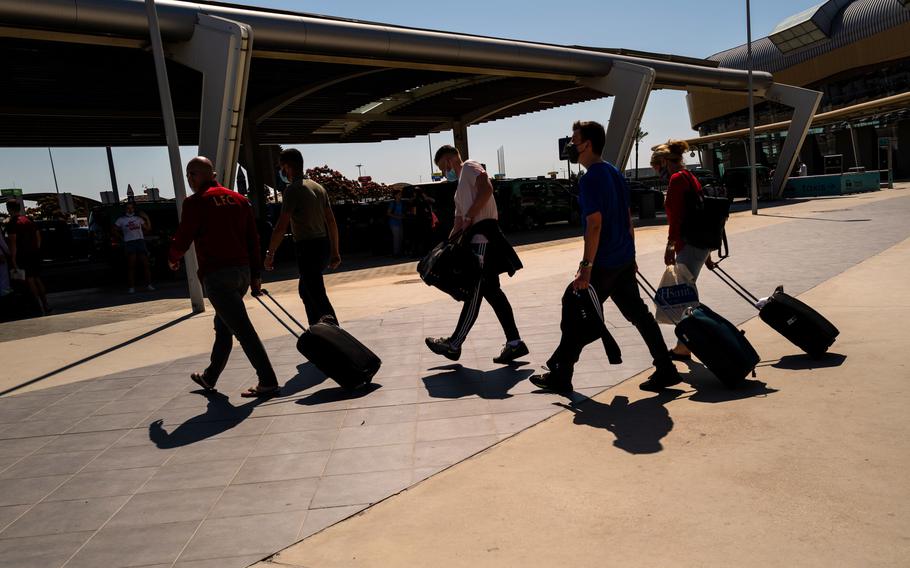 Tourists wheel luggage from the arrivals terminal at Faro Airport in Faro, Portugal, on May 29, 2021. (Jose Sarmento Matos/Bloomberg)

European airlines hoping to extend the holiday season are running up against the start of the school year that is denting family bookings, while the spread of the delta variant of COVID-19 prompts new travel curbs.

Carriers including Ryanair Holdings are keeping prices low to prolong leisure demand through October. The airline is also beefing up winter timetables in a bet that the yearning for a vacation will sustain sales even in what's normally the quietest period for European travel. Tour operator TUI says it's ready to add capacity in Mediterranean resorts if the opportunity arises.

At the same time a surge in coronavirus cases that's led to renewed lockdowns in Asia and a flatter travel market in the U.S. is threatening to strangle off a European tourism revival that's seen capacity in the region recover to two-thirds of 2019 levels. The U.K. last week kept Turkey on its red list, dashing hopes for a reopening, and downgraded Thailand, a popular luxury destination during colder months. The European Union on Monday moved to tighten curbs again for American arrivals.

"There's a risk that the really good late summer traffic we've seen could be a bit illusionary," said Nick Cunningham, an analyst at Agency Partners in London. "With kids going back to school, and the likelihood that could bring a flare-up in cases, winter is looking much more uncertain for the airlines."

It remains unclear whether vaccinations will keep case numbers low over the winter, when viral infections generally surge. Any significant outbreaks are likely to trigger a deeper clampdown and put off older travelers and those without children who have the ability to travel year-round.

For the moment at least, European airlines are grabbing what they can.

Dublin-based Ryanair, the region's biggest discount carrier, said Aug. 17 it will operate 250 new routes across its network this winter, seeking to capitalize on demand from people who missed out on a summer break overseas. Rival Wizz Air Holdings has already restored 100% of pre-pandemic seating, becoming one of the few major operators worldwide to do so.

But the competition for market share as travel returns has come at a cost in the form of bargain-basement prices and hence thin margins, said John Grant, chief analyst at aviation data provider OAG.

"Airlines were hoping to rebuild cash reserves this summer to cover the winter season," Grant said. "But airlines have had to almost buy traffic with low fares. And forward bookings in many cases are soft, with consumer confidence shattered by the stops and starts of travel restrictions."

TUI, the world's biggest package-holiday firm, said it's expecting a bumper winter in the Canary Islands, Europe's go-to destination for year-round sunshine. The company has looked at extending the season in countries such as Greece and Turkey, where leisure flights are usually terminated as the autumn sets in.

"Because we own planes and hotels and have overseas teams on the ground we can be very flexible and pivot toward where the demand is," TUI UK spokeswoman Liz Edwards said.

At the same time there's little visibility over forward sales, she said, with hotels unable to see beyond the three-week periods for which the U.K. government sets it travel policy. Turkey, a popular destination with both Brits and Germans, is still deemed high risk in both countries.

Deutsche Lufthansa Chief Executive Officer Carsten Spohr said the airline was bracing for a "hard" winter as the virus continues to spread and curbs on travel remain in place. The carrier, the recipient of a 9 billion-euro bailout last year, still expects to hit 40% of its pre-pandemic capacity for this year, a forecast underpinned by expectations for a gradual easing of restrictions but that could be undone by rising infections.

"We were one of the first sectors to be hit by this pandemic, and we'll be among the last to get out of it," Spohr said at an event at Frankfurt airport late Monday.

Globally, airline capacity now stands at 69% of pre-pandemic levels, according to figures from OAG. China, which at one stage during the pandemic overtook the U.S. as the world's largest aviation market, remains 13% down on 2019 levels, with travel largely limited to domestic flights that do nothing to buoy Asia's wider tourist economy. The U.S. remains about 13% below 2019 levels, OAG data show.

The International Air Transport Association said Friday that the industry had a collective net loss of $6.9 billion in the second quarter, less than half the $14.4 billion deficit in the first three months. Still, only North American carriers posted a profit, and Europe's loss of $4.6 billion was virtually unchanged.

With the days shortening in Europe, travel firms there also need long-haul leisure trips to the Caribbean, North America, Indian Ocean, Middle East and southeast Asia to bring in revenue. But the reality is that options for intercontinental travel remain limited and could shrink further.

While the U.K. moved Canada to its green list, meaning arrivals can skip quarantine regardless of their vaccination status, the inclusion of Thailand in the red category deprives travel firms of a lucrative winter-sun destination.

The Caribbean remains a rare long-haul bright spot. Virgin Atlantic Airways Ltd. says bookings for Barbados, Antigua and Grenada surged 300% when the islands were added to the U.K. green list. The former is one of the carrier's busiest destinations, with 11 weekly flights from London Heathrow and Manchester and a new service from Edinburgh set to start Dec. 5.

Some 70% of bookings are for travel before the end of September, suggesting huge pent-up demand, spokeswoman Laura Brander said, while many passengers are paying extra to fly in the carrier's Upper Class cabin.

At TUI, U.K. bookings to St. Lucia have also been "really good" and the company is operating more flights to Jamaica than it did before the pandemic, according to Edwards, helping to make up for the closure of destinations such as Mexico.

Dubai-based Emirates, the world's biggest long-haul airline, last week brought forward plans to boost operations to more than 10 locations in Europe, though demand may be limited with many Asia-Pacific destinations with which it connects still effectively closed.

Clouding the outlook for Europe's network airlines is continuing uncertainty over the return of trans-Atlantic travel. Airline routes between the EU and U.S. rebounded to almost 50% of pre-pandemic levels after the EU chose to let in fully vaccinated Americans in June. That window now looks to be closing again after EU countries voted to subject the U.S. to fresh restrictions on nonessential travel.

Westbound travel also remains in the doldrums as the U.S. administration continues to close the door to non-Americans. That in turn could prompt a new cash crisis at airlines that have had only weeks to build up profits after more than a year of lackluster demand. It may lead to new rounds of fund-raising, putting governments under pressure to extend bailouts that already total around 40 billion euros ($47 billion).

"Airlines face a long, dark winter and unless there are major breakthroughs in the easing of restrictions, the prognosis for international travel in the first quarter of next year will be no better," said OAG's Grant. "Many will be looking for more cash and this may force some to look at takeovers from the few carriers that are better resourced."