US to start vaccine boosters next month amid delta surge 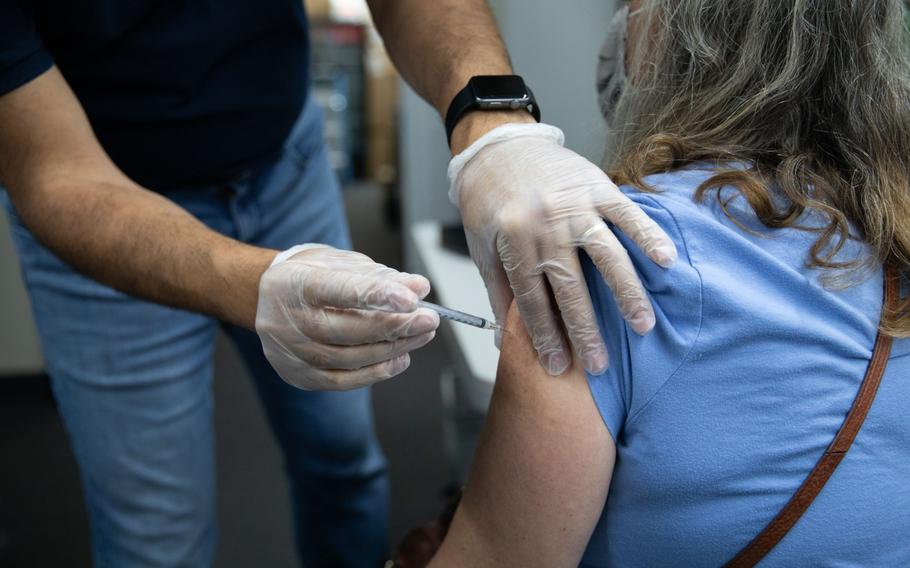 A pharmacist administers a third dose of the Pfizer-BioNTech COVID-19 vaccine to a customer at a pharmacy in Livonia, Michigan, on Aug. 17, 2021. (Emily Elconin/Bloomberg)

The Biden administration will start offering booster shots in late September to all vaccinated Americans as the coronavirus delta variant continues its nationwide spread.

In a joint statement Wednesday, the top U.S. public health officials said a third dose of Pfizer and Moderna shots "will be needed to maximize vaccine-induced protection and prolong its durability."

"Based on our latest assessment, the current protection against severe disease, hospitalization, and death could diminish in the months ahead, especially among those who are at higher risk or were vaccinated during the earlier phases of the vaccination rollout," according to the statement citing health officials including Centers for Disease Control and Prevention Director Rochelle Walensky, Food and Drug Administration Acting Commissioner Janet Woodcock, Surgeon General Vivek Murthy, and infectious disease expert Anthony Fauci.

The U.S. will begin issuing more booster shots as soon as Sept. 20 to people who received their second shot at least eight months earlier, according to the statement. The plan is still subject to an independent evaluation and clearance by the FDA.

Health officials are still studying a possible booster for the roughly 14 million Americans who received the Johnson & Johnson single-dose vaccine, which didn't use the same mRNA technology as Pfizer and Moderna. But the officials said they anticipate boosters for the J&J shot "likely will be needed."

The U.S. is facing a new wave of COVID infection, primarily among the unvaccinated and driven by the delta variant, which has fueled concern over breakthrough infections. Deaths have been rising again, too, including 1,002 recorded on Tuesday.

Still, the medical community remains divided over the efficacy of widespread booster shots, though studies continue to roll in on breakthrough infections and whether vaccine efficacy wanes over time, in particular for older or more vulnerable people.

Nearly 170 million people in the U.S. have been fully vaccinated, though only some would become eligible in the next few months for a booster.

Officials said they have enough supply to continue donations and exports to other nations still struggling to procure vaccines. Still they've faced criticism for stoking inequities by handing out third shots while vast majorities of people in many countries haven't had their first.

The World Health Organization has called for a moratorium on booster shots through September to enable poorer countries to catch up on vaccination rates. A spokesperson for Gavi, the Vaccine Alliance, which co-leads the Covax sharing program, said that rich countries giving boosters will only exacerbate inequities and called on countries to share all excess doses with Covax.

The move Wednesday marks a massive expansion of the U.S.'s vaccine plan, which had so far only included boosters for people with compromised immune systems.